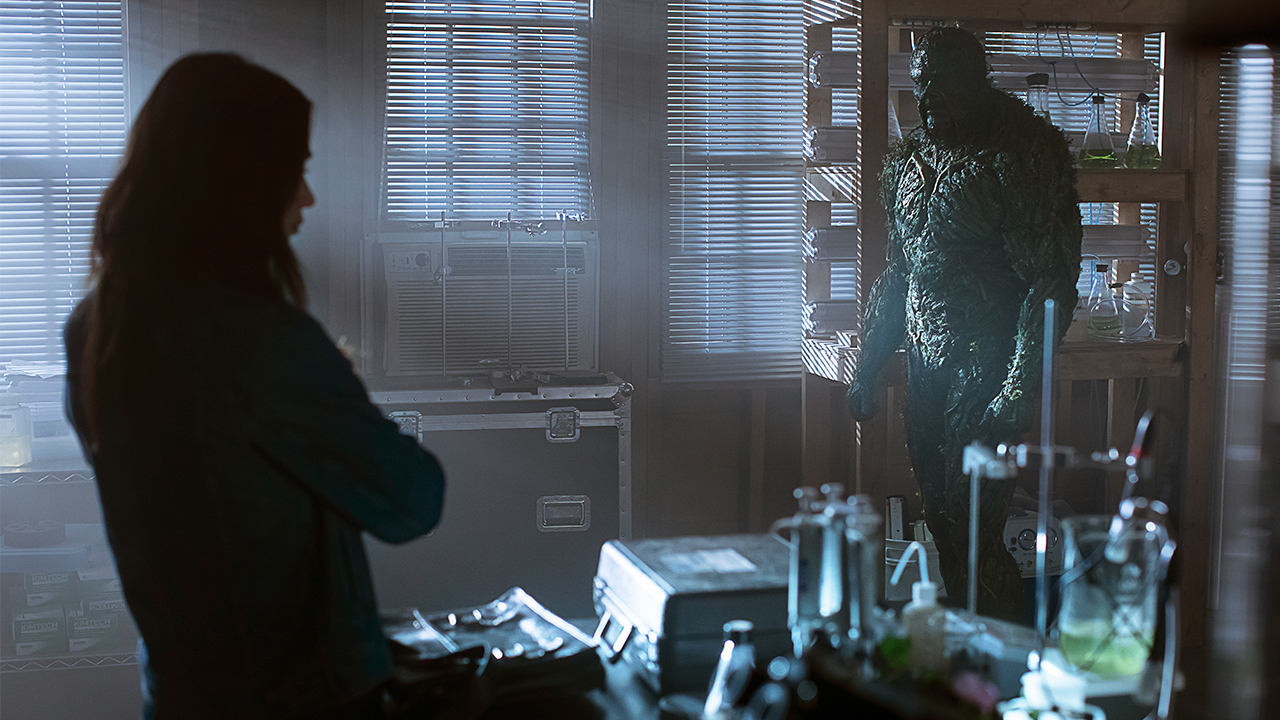 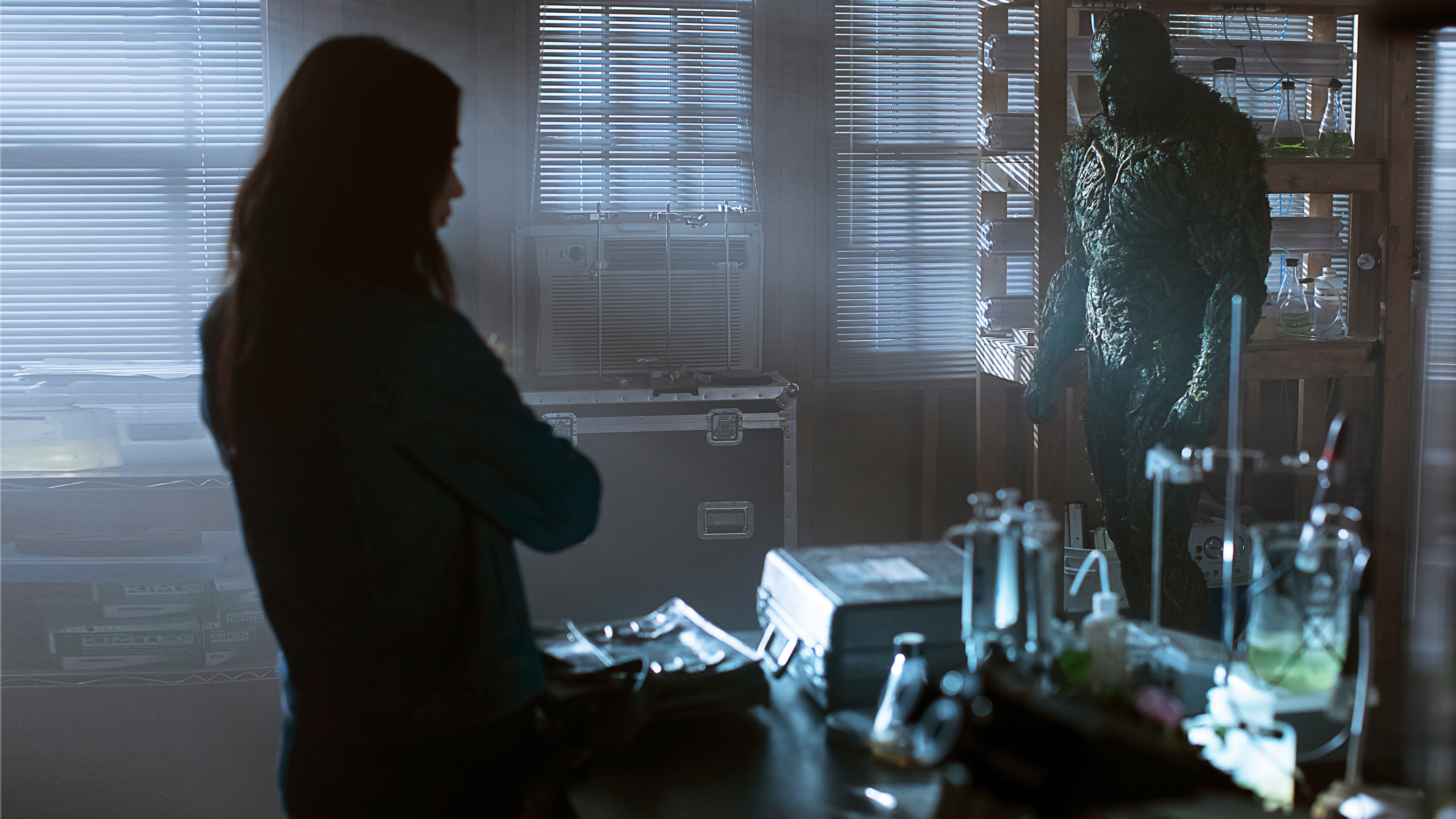 We Recap SWAMP THING: The 5 Most Shocking Moments in "The Price You Pay"

As we move ever closer to the final episode of DC Universe’s 'Swamp Thing,' the secrets of Marais, Louisiana are bubbling to the surface and "The Price You Pay" (named after the song on Bruce Springsteen's 1980 album 'The River') focuses on the ramifications of those secrets. After last week’s episode saw some huge reveals – including Sheriff Cable's overprotective instincts leading to the murder and the possession of Susie -- we jump right back into the horror-drenched action. It's a particularly packed 45 minutes. Here are the five most shocking sequences from "The Price You Pay"…

With Abby and Alec growing ever closer, this episode opens with the latter stalking his shady home as he considers his connection to the woman with whom he spent his last mortal night on Earth. His peaceful thoughts are quickly shattered, though, as he's hunted through the swamp by Avery Sunderland's hired guns. But that's not the most horrifying part, as Swampy begins showcasing even more of his supernatural skill set; utilizing the gnarled trees that have burst from the water to impale his would-be captors with multiple spears, disfiguring and disabling them before they have the chance to do any harm.

A (Literal) Deal with the Devil

One of the most interesting teases of this season so far is the tale of Daniel Cassidy A.K.A. the Blue Devil. Thus far, he's been portrayed as an out-of-work actor, trapped in Marais by a mysterious deal. But in "The Price You Pay," viewers are treated to his terrifying backstory. During the shooting of the film ‘The Blue Devil,’ it turns out that Cassidy was approached by a mysterious man he assumed was a studio exec. After making a Faustian pact with the suited gentleman, Danny suddenly found himself in the lead role of the movie, but his fate and connection to Marais were sealed.

The Truth About Alec's Death

Since the pilot, there's been a key mystery at the center of 'Swamp Thing’ -- Alec Holland murdered by a shadowy figure in a black hood. It appeared likely the killer was either Avery Sunderland or someone hired by him. But in a stunning twist seeded last week, it was revealed that the killer was actually Matt Cable. Yep, Abby's childhood friend and the son of the local Sheriff was drafted by Avery Sunderland to kill the man threatening his town, and his maniacal schemes to redevelop the swampland. It's a horrifying reveal, as Matt had seemed like one of the few people in Marais who wasn't completely corrupt. But that’s all changed now that we know he took the fatal shot at Alec.

Is That the Blue Devil?

Danny Cassidy is at the center of "The Price You Pay" largely due to the fact that he was put in a coma by Avery's men last episode. Just as things seem lost, Jason Woodrue decides to use Cassidy as a human test subject and suddenly the enigmatic loner is alive and well... well, sort of. It quickly becomes clear that Danny has had a bad reaction to the swamp potion that Woodrue injected him with, and as he burns up with a fever he turns an interesting shade of blue. Along with his newly found imperviousness to bullets and knives, his hue hints at his superheroic role in the comics becoming a reality on screen.

Just as this episode began with Abby and Alec, so it ends with them -- the latter's powers manifesting into a psychedelic flower which makes his human self visible once again to Abby. It's a powerful moment which plays on the emotional connection between the two, sparked in the pilot but cut short by Alec's untimely death. What it means for the pair going forward is still unclear, but it has huge potential ramifications. Especially if it also restores Alec's memories, which would be a huge source of conflict as we now know Matt was the one who killed Alec.

With the twist ending in "The Price You Pay," there are a whole bunch of questions that 'Swamp Thing' needs to answer when it returns next week. As always, we'll be here to highlight the best moments when it does.