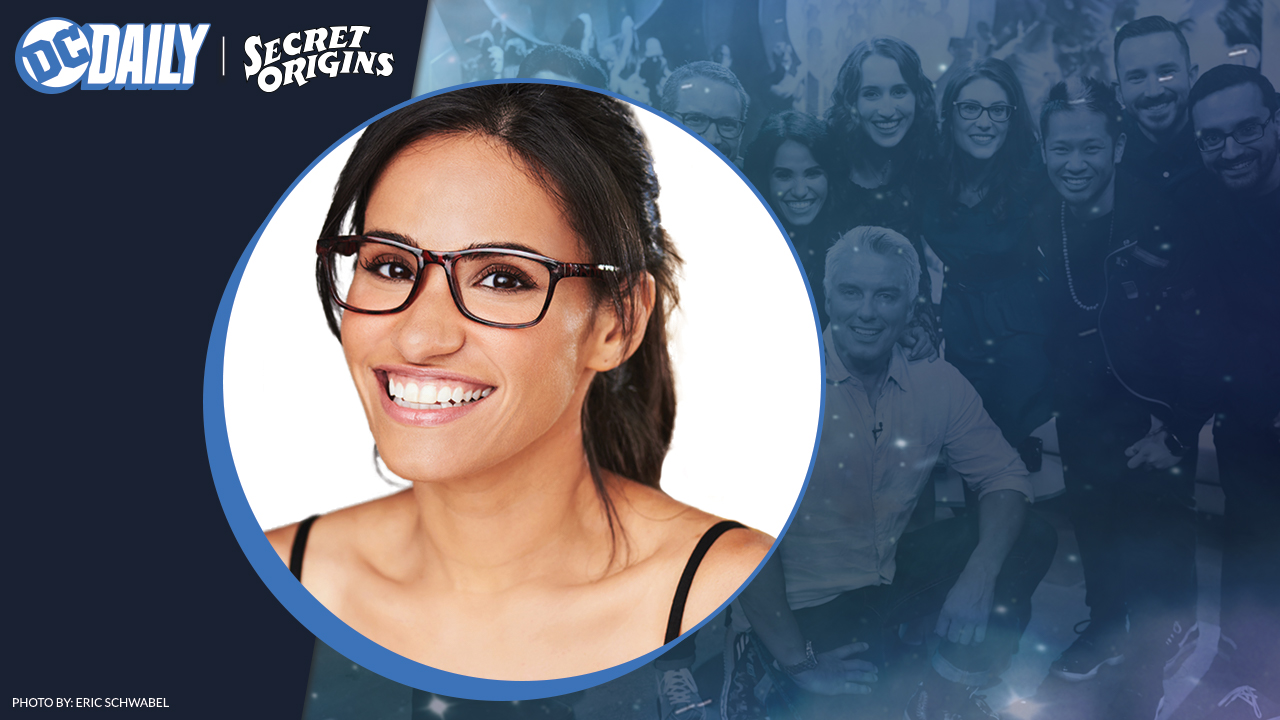 In "Secret Origins of the DC Daily Cast," we're delving into the lifelong fandom of your favorite DC Daily hosts, from their first comic book memory to their biggest comic book crush. If you want to submit a question for our next cast member interview, be sure to visit our Community! This time around we chatted with our very own Princess of Prestidigitation, Tiffany Smith. She's a vital part of the DC family and is also an actress and writer, and she recently became royalty with a title role in the Lifetime movie Harry and Meghan: Becoming Royal!

The moment I fell in love with the DC Universe was when I was really little. For Halloween one year my mom dressed up as Wonder Woman. I have a photo of her in that costume I posted on social media somewhere, but I just thought she looked so cool. Then my sister would run around in her little Wonder Woman Underoos and I wanted to be just like both of them. So that was the moment it was Wonder Woman and of course DC! I didn't know it was DC at the time, but now knowing everything, I can see that was the moment when Wonder Woman became an icon in my mind.

I would go with Zatanna always. She's just awesome. I think it's answering some other questions down the line, but she's the one that I really think of the most, because I think she's one of the only characters that has the persona where she's an actual performing magician but also a magic magician with the dark arts and stuff. So it's this balance of her performance based arts versus who she really is. Not saying that I'm a dark arts magician, but you know, getting to do the hosting thing and acting thing, there's a different version of yourself that everyone gets to see. And then there's like a private side of you as well. 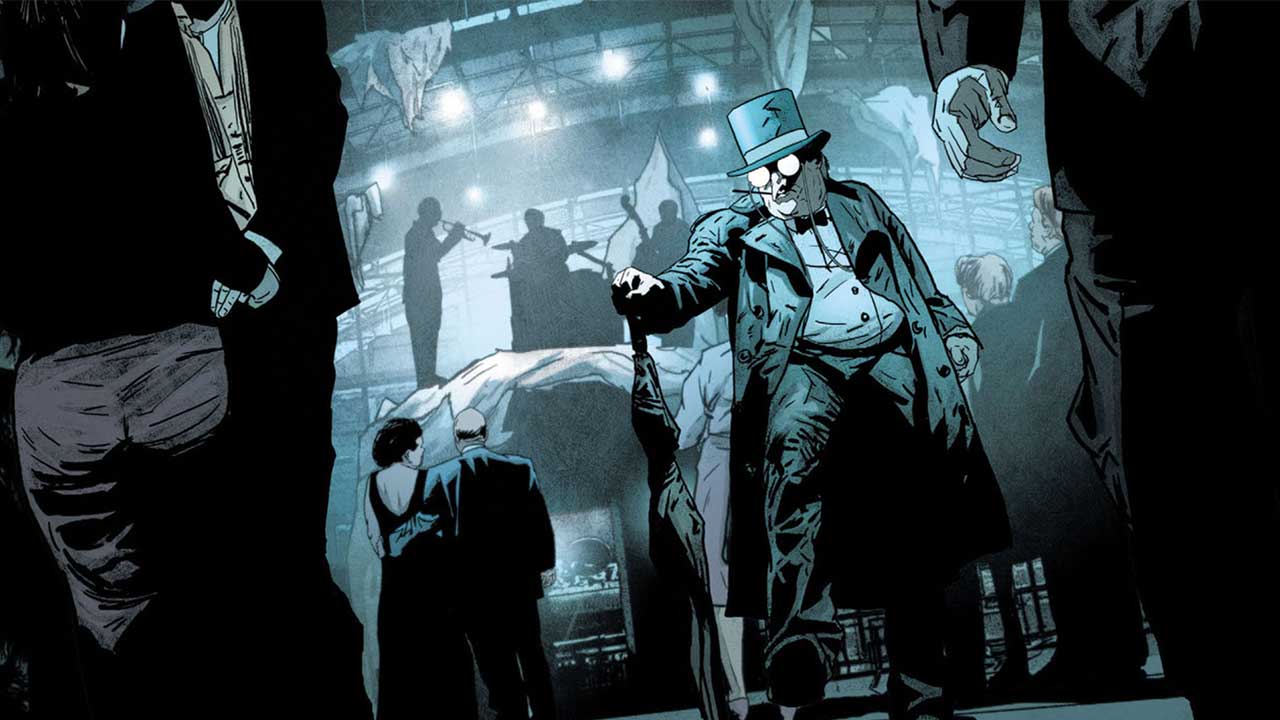 I feel like people don't talk enough about Penguin: Pain and Prejudice by Gregg Hurwitz and Szymon Kudranski. It's one of my favorites because -- and maybe I was alone in this -- but Penguin always seemed a little like a mess to me. But then I read this run and it just made me feel so much and understand the character so much better. I think DC is so good at villains. So when you get a story that tells you something that maybe you didn't know or didn't quite understand, it just makes them that much more relevant. And, you know, I always say this, but a villain never thinks that they're a villain. They think they're doing the right thing. And so it's like hearing what we're seeing visually and reading what happened to him and losing love and his mom and all that stuff. And then you understand more of who he's become.

I think I would have to go with Batman, just because it's just all black and just has the bat emblem on it. And it's done. Like, it can kind of be on anything. It's such a simple emblem. And I know Superman is the same, but you're like, "No, you've got to have the red and the blue and maybe a little yellow." But with Batman, he could be wearing all leather and just have the Batman emblem on the front and everyone would know it was Batman.

It's definitely Batman from Batman: The Animated Series. Because I hadn't read a lot of the darker stuff at that point. Obviously a lot of it hadn't even come out in the same way it has now, but as a kid I would watch it every day. And the fact that now you can rewatch them and get even more out of those episodes is amazing. Also the acting was so next level. The voice actors... I mean, I don't know that there are many other series where the voice of a person stays with you all the time. Mark Hamill is always the Joker, even when he's being Luke Skywalker. So I think that's the Batman version that's most ingrained in my brain.

Obviously it's Zatanna, and I covered this earlier, but the only other thing I would add is that she's somebody that's always willing to sacrifice herself for the greater good. And I think that's something -- especially for me right now having come off of doing the Harry and Meghan movie -- that I want to focus more on. Like what good I can do in the world, whether it's philanthropy or volunteering or that sort of thing. I can see that in her, where she is really willing to even use more of the magician side of herself that could be a detriment to her. I think that that's something that I value in myself. 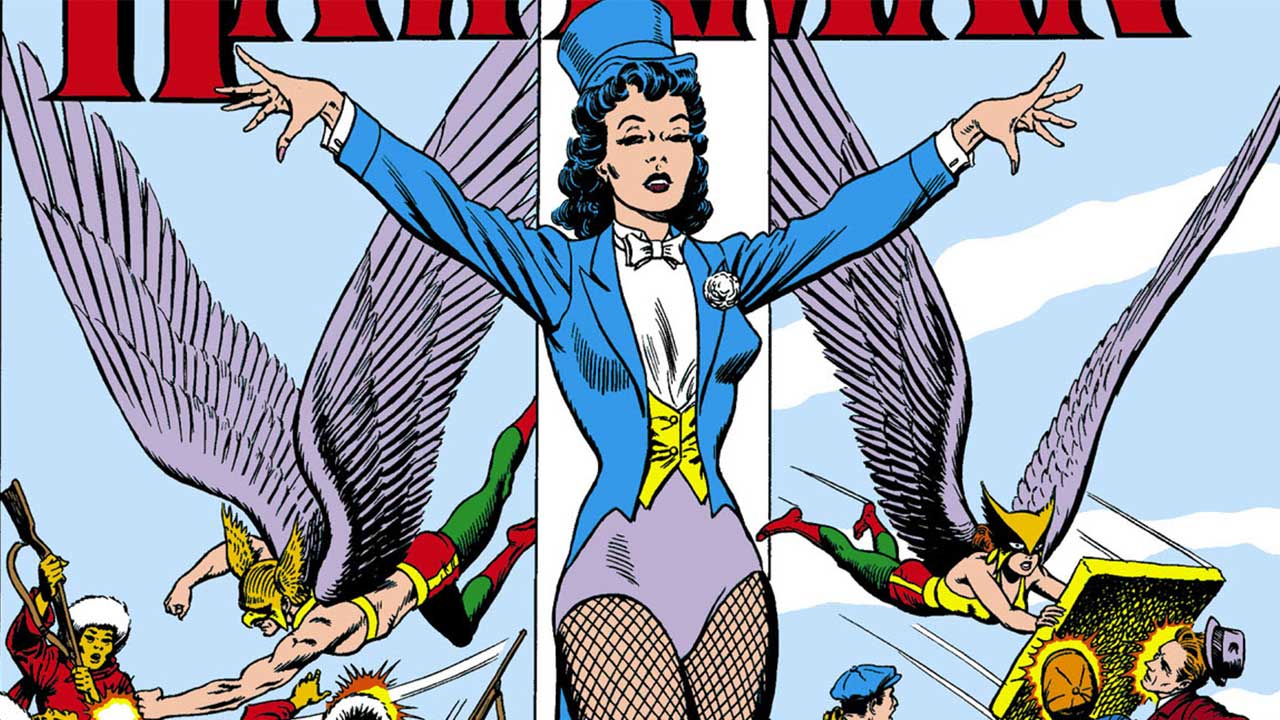 Well this one also goes into my most prized DC possession. I have Hawkman #4, which is the first appearance of the Zatanna from 1964. It's incredible. I mean, just looking at comics from the '60s where the old ads are mixed in there, it's so much fun. But also this is the first time we ever see Zatanna, and the first time we see her doing incantation. I just love it so much. I'm really into kind of making lists of things I want to achieve and visualizing things and putting things in my face that remind me of that. My ultimate goal is to at some point play Zatanna. So having that first issue of the comic always in my eyeline every day is awesome.

This one was really hard for me! Because I wanted to be like, "No one because I wouldn't want to fight any of them." I think the hardest person for me to go up against would probably be Harley Quinn, just because she's so fun. I would definitely think she would be able to be good. So I'd want to work with her and then I'm sure we would have some mishaps and she'd probably trick me into getting into trouble.

This one's a toss-up. I will first say I don't do so much cosplay now because it's so much effort. I mean that in the best way because if I'm doing cosplay I want it to be all out. I don't want it to be just like, "Oh, I'm gonna throw on a t-shirt. Now I look like her." No! I want it to be, "Everything is perfect." In the past, though, I've done Wonder Woman and I've done Zatanna.

Out of the DC universe, who is your ultimate comic book crush?

So this one would have to be Dream from Sandman. I don't know why but I know I'm not alone in this. There's just something about Sandman, the vibe was just so emo and kind of reminds me of The Crow. This dark broody guy who's also romantic in some ways. I remember reading Sandman for the first time and just being like, "Oh my gosh, he's just amazing." 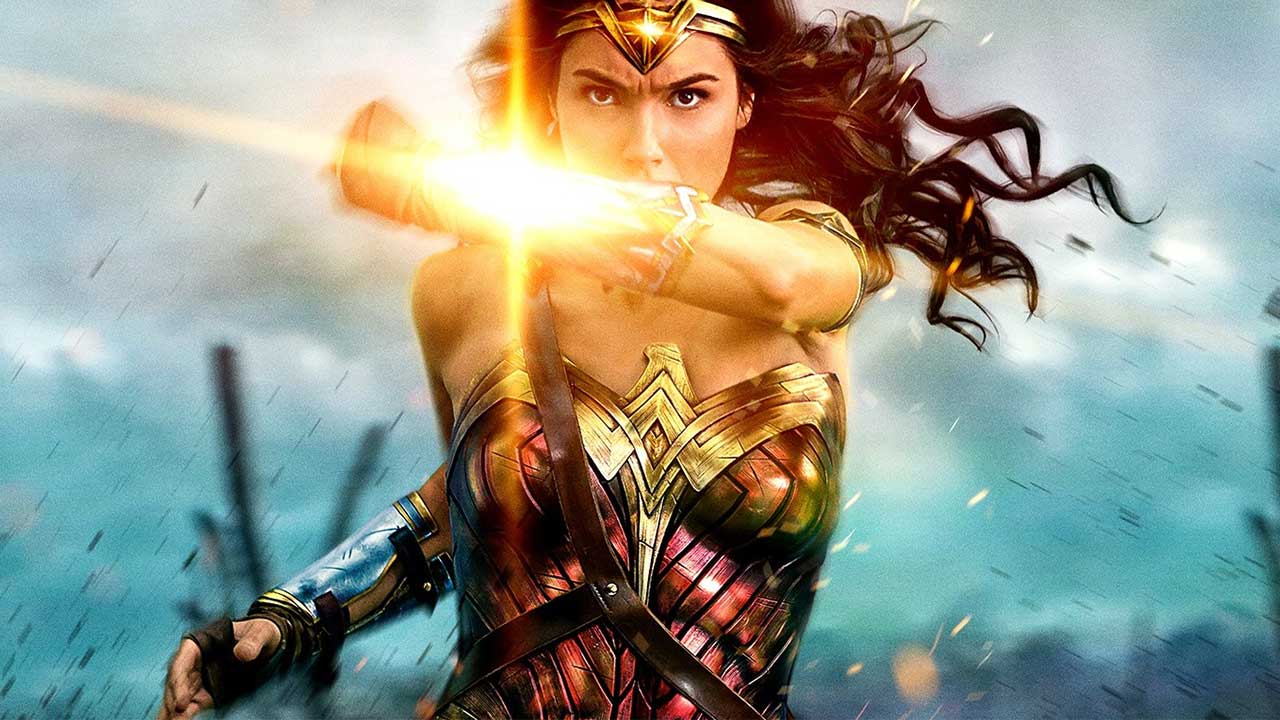 It has fluctuated before this but after Wonder Woman came out, it's going to be Wonder Woman for me for a very long time. Not only was it a superhero that I loved coming to life, but there was just so many moments of women's empowerment or just general empowerment for everyone. That has stuck with me. I didn't expect to feel as emotional as I did watching the movie. I just remember the first scene where little Diana is up on the mountain training herself because she's not allowed to train with everybody. That really stuck with me.

I think what I love so much about the movie is I got to be on a different side of it and do a set visit and spend some time with Patty Jenkins and Gal Gadot. Just seeing who they are as people was really impactful to me because a lot of times people take on roles and they don't really want to embody the message. But this is one where I think both of them really embody so much of who Wonder Woman is. That was really inspiring and cool for me to see. 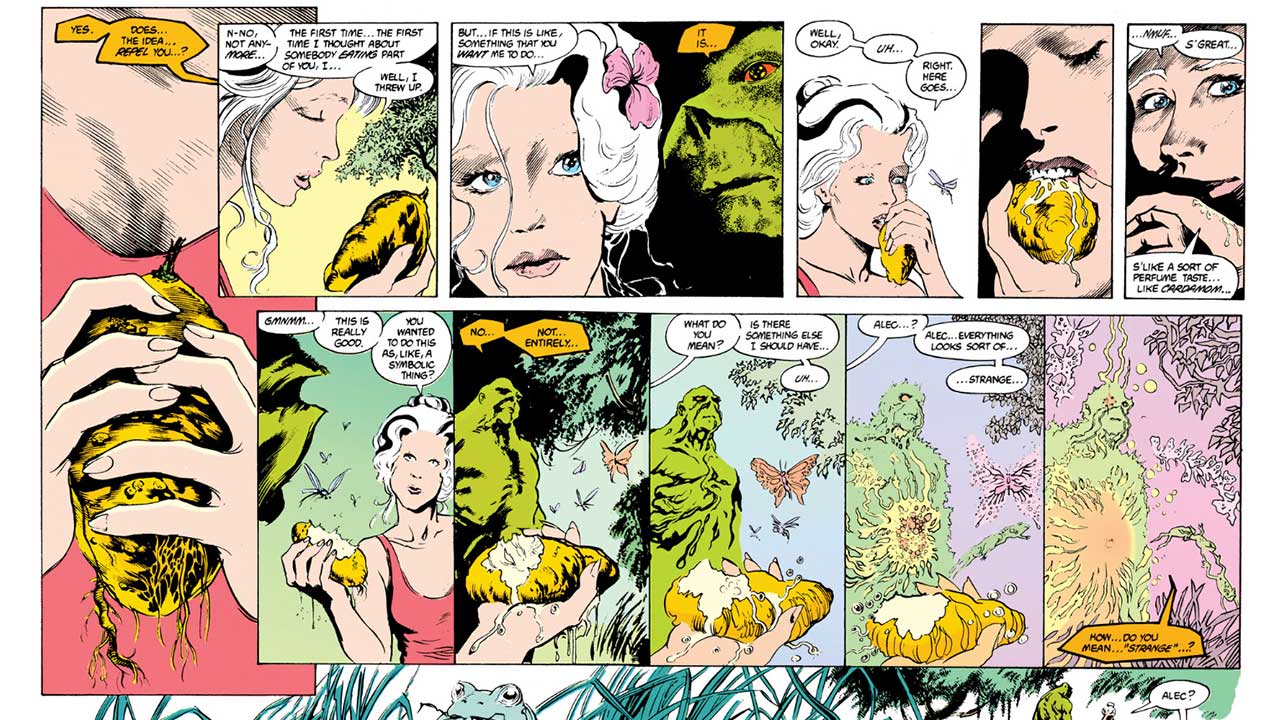 I don't know that I have too many but apparently I was making comments about how I love Alan Moore and Stephen Bissette's Swamp Thing run. And I was also joking about the sex scene in Swamp Thing #34 and I think it's literally one of the sexiest things, the way it's written is so amazing. I know it might sound weird but it's so good! The cast were definitely mocking me for a while after that one, though. Anytime we brought up Swamp Thing everyone would be like "Boom Chicka-Wow-Wow."

Right now I am going back and re-watching Doom Patrol because I loved it so much. I think it's so different and quirky and interesting and dark, but also funny and very satirical. Alan Tudyk is one of my favorite actors, and Diane Guerrero blows my mind in every single episode. The stuff that she does, I mean, it's incredible. I had read Doom Patrol before, but I didn't have an ingrained idea of who all these characters were in my head, which I think a lot of times helps when you do a new series or even a movie. So Doom Patrol for me is the highlight of what's on DC Universe.

What’s been your favorite moment on DC Daily so far?

I think it's probably a tie. The first one was doing the launch livestream for DC Universe. It was a really big highlight just because I've been working on DC All Access for a while. So when this new idea came up, and it was going to be the whole platform and all this stuff, it was really, really cool to get to be a part of launching that. Doing the livestream alongside Kevin and introducing all the new cast and old cast that we were bringing onto DC Daily was amazing. That was a huge moment, a massive highlight for sure. Then, just for me personally, we had an episode where [writer] Paul Dini and Misty Lee came on. And I love getting to talk to Paul Dini about Zatanna and Misty as well because she's his wife, obviously, and a magician. So much of what he did with Zatanna was based off things she shared with him as a magician and we even got to see her do magic for us. So that was a massive highlight for me, it was one of those moments. I rarely ask people to sign books that I have, but I actually brought my books that day and was like, "You mind signing it for me?" So that was definitely a geek girl highlight.

Thank you to Tiffany Smith for taking the time to chat with us. Are you a fan of Tiffany? Let us know in our Community!