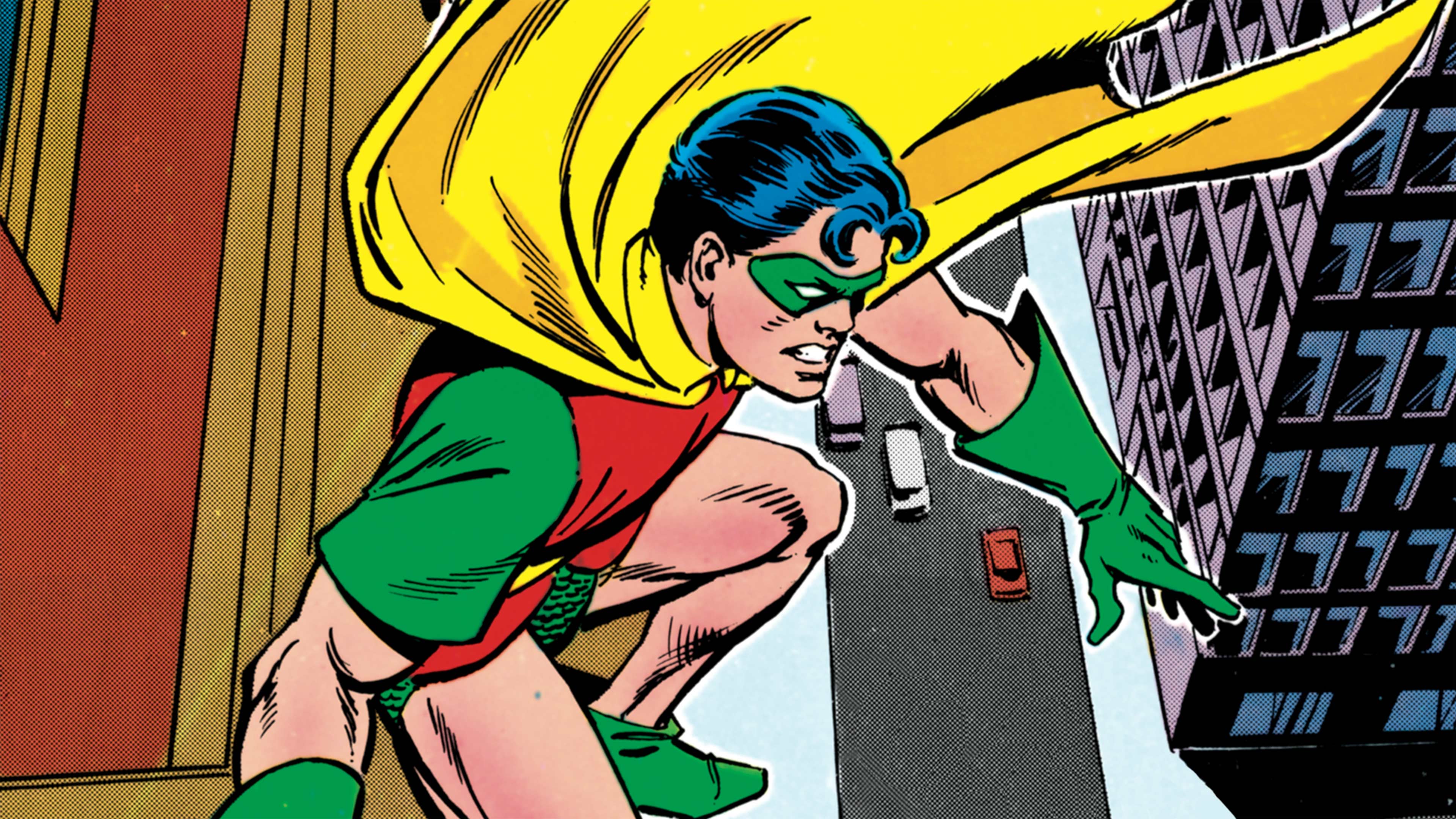 It’s Robin’s 80th birthday, and we’re celebrating all week long! Each boy (and girl) that’s worn the Robin mask has brought their own unique style to the role, and we’re here to break them all down. Yesterday we spotlighted Dick Grayson, now it’s time to turn our attention to his renegade successor. Let’s take a look at Jason Todd’s tenure as Robin the Boy Wonder! 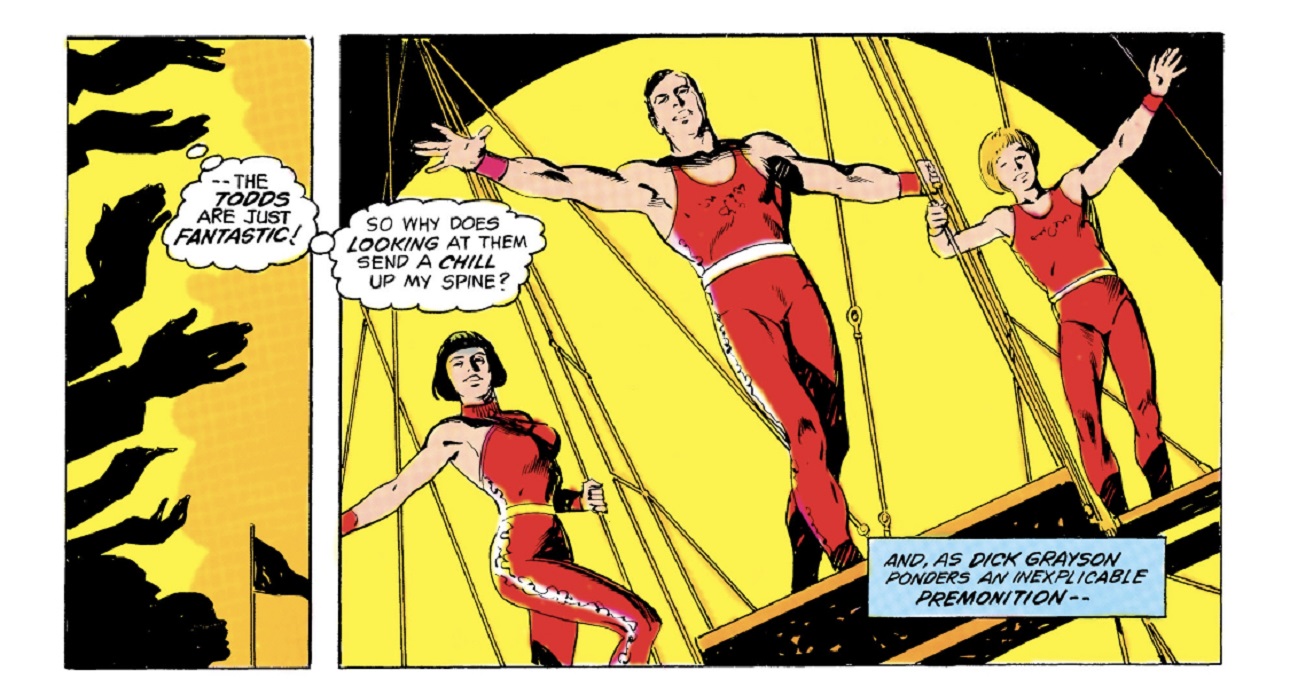 The year was 1983 and DC Comics was looking to make a change. The writers longed for the old relationship dynamic between Batman and Robin, but now that Dick Grayson was college age, the mechanics of their partnership had shifted. A solution was presented: let Dick Grayson find a life away from Batman, and introduce a new partner for the Dark Knight.

Readers met Jason Todd in Batman #357, but you’d be forgiven if you didn’t recognize him. The original version of Jason Todd was a moptop redhead and circus acrobat. Dick Grayson met the Flying Todds after seeing them perform at Sloan Circus, an quickly became a family friend. Jason’s parents lost their lives after Robin asked them to help investigate Killer Croc. The amphibian crime boss made quick work of the acrobats, and fed their bodies to his crocodile pets.

Unaware of his parent’s fate, Jason waited for their return at Wayne Manor, where he accidentally discovered the secret entrance to the Batcave in Detective Comics #526. Jason found one of Dick Grayson’s old performance costumes, and went out on the streets for the first time. During his impromptu patrol, he learned that Killer Croc had murdered his parents and angrily attacked the criminal. Feeling guilty for his role in the Todd’s deaths, Dick Grayson offered to adopt Jason, but Bruce told Dick he should be the one to do it. 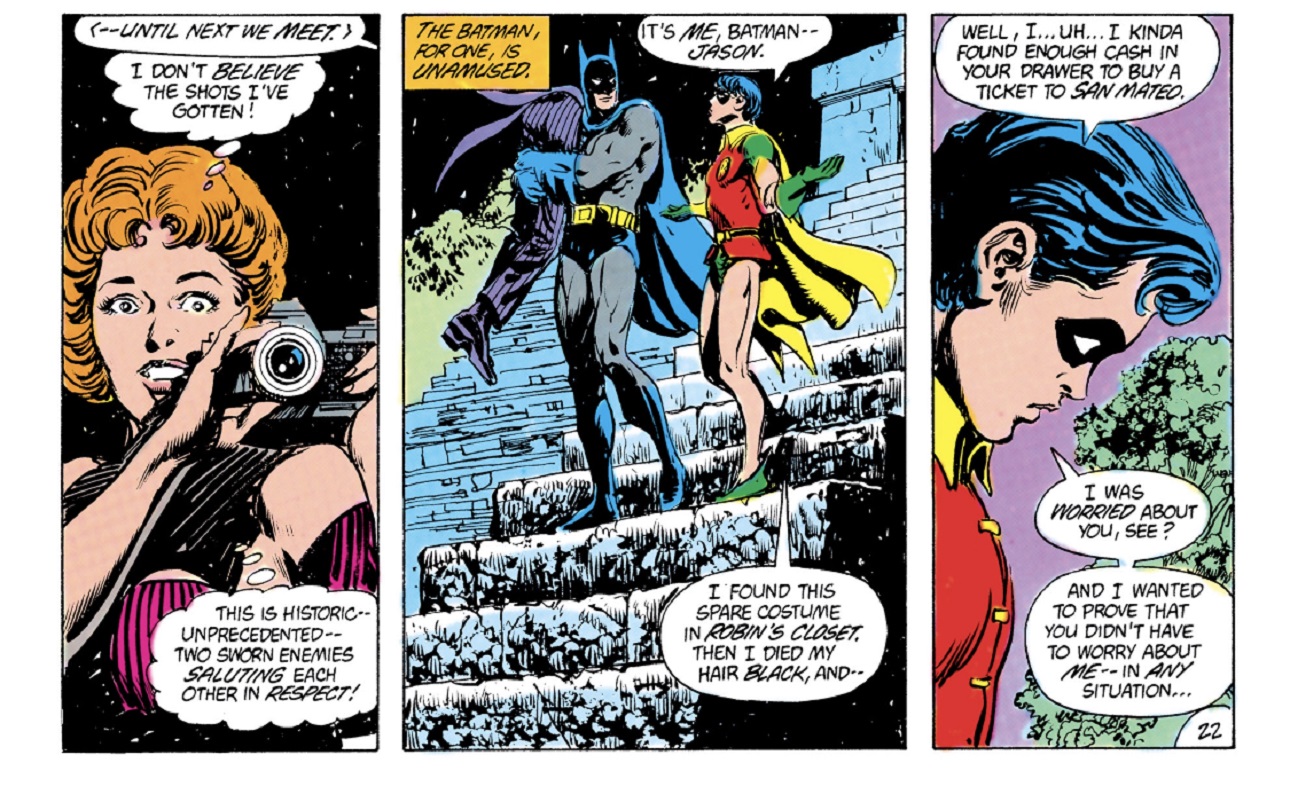 Jason was eager to become Batman’s new partner, but the Caped Crusader was initially reluctant. After an aggressive campaign from Jason, including a brief period where he ran away to rejoin the circus, Batman finally agreed to train him. In Batman #366 Jason dyed his hair black and dressed up as Robin to save Batman from the Joker. Batman initially disapproved of Jason’s actions, feeling that it was a betrayal to Dick. Jason spent the next few weeks trying to figure out a costumed persona, until a visit from Dick Grayson put the issue to bed in Batman #368. The original Boy Wonder insisted that Jason had earned the role, and Dick officially passed the torch to his successor.

The new Robin’s life with Batman was interrupted when the courts rejected Bruce Wayne’s adoption petition, and awarded Natalia Knight custody of Jason. Natalia Knight was secretly a villain known as Nocturna, who hoped that her adoption of Jason would coerce Bruce Wayne into marrying her. Jason came to view Nocturna as a mother figure, and although he shipped Batman and Natalia, the arrangement didn’t work out. Jason was returned to Wayne Manor, and Bruce Wayne’s adoption petition was officially approved.

During this period Robin teamed up with Harvey Bullock to solve a series of crimes. The oddball pairing of the disgruntled cop, and the idealistic youth worked well, and the two grew to respect one another. When Bullock concluded that Batman had replaced the original Robin with a younger boy, he presented his findings to Commissioner Gordon in Detective Comics #556. Gordon told Bullock that he had known from the beginning, but hadn’t said anything because he recognized that Batman operated better with a Robin. 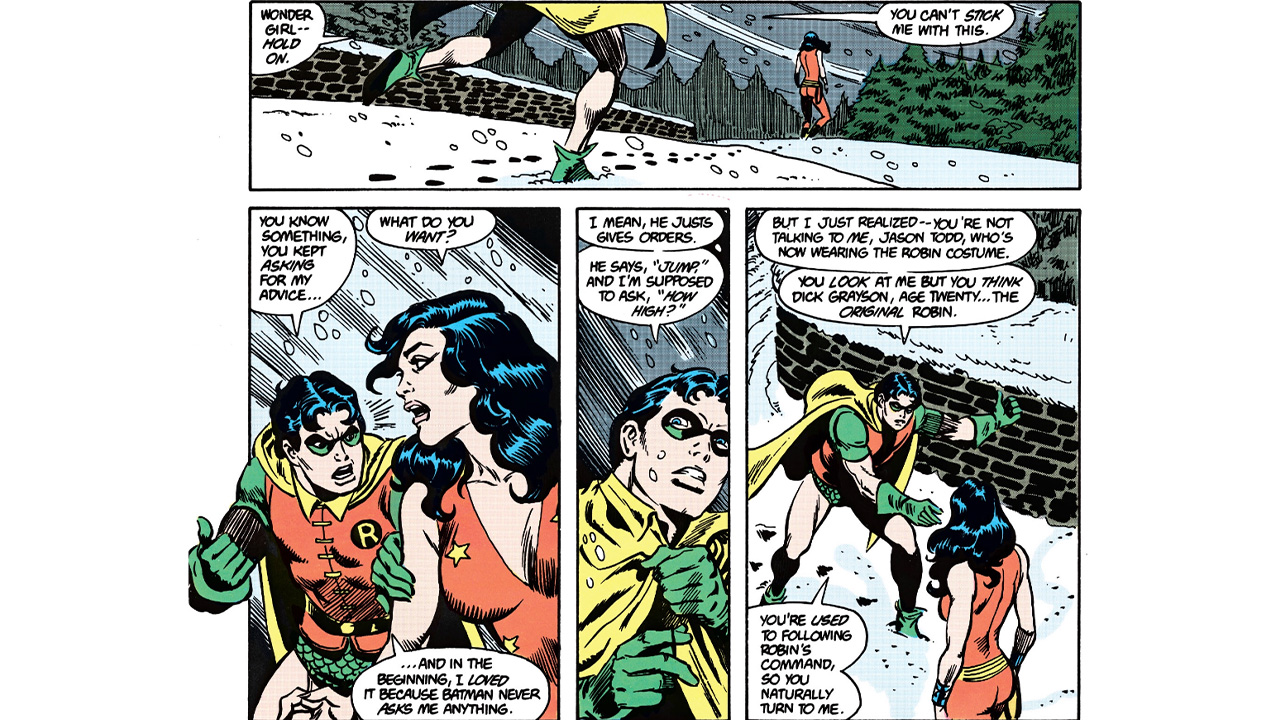 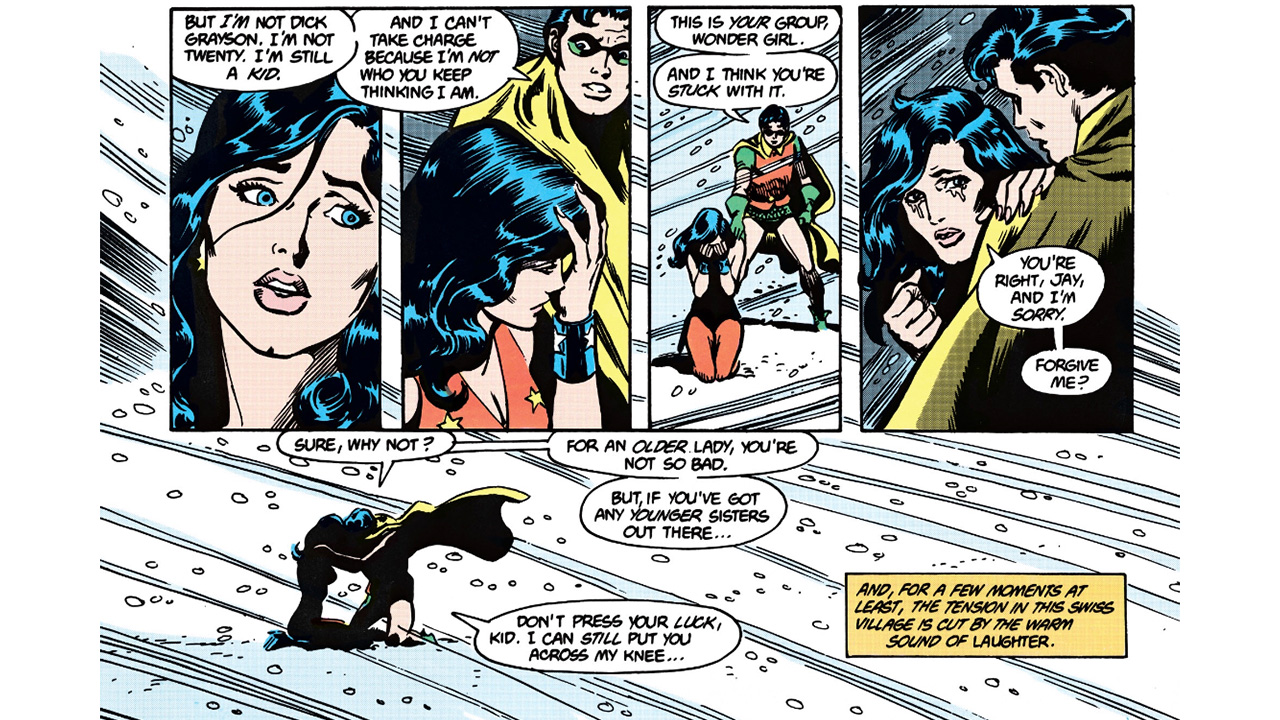 In 1986’s New Teen Titans #19, Wonder Girl recruited Jason Todd to the Titans after a mass exodus had emptied the group’s roster. Since Nightwing wasn’t around, Donna Troy began turning to Jason for leadership advice, forgetting that the youngster wasn’t Dick Grayson. When a disillusioned Wonder Girl told Jason he was the new leader of the Titans, the Boy Wonder helped bring the Amazon back down to Earth. He reminded her that he wasn’t Dick, and helped her come to terms with her responsibilities as team leader. 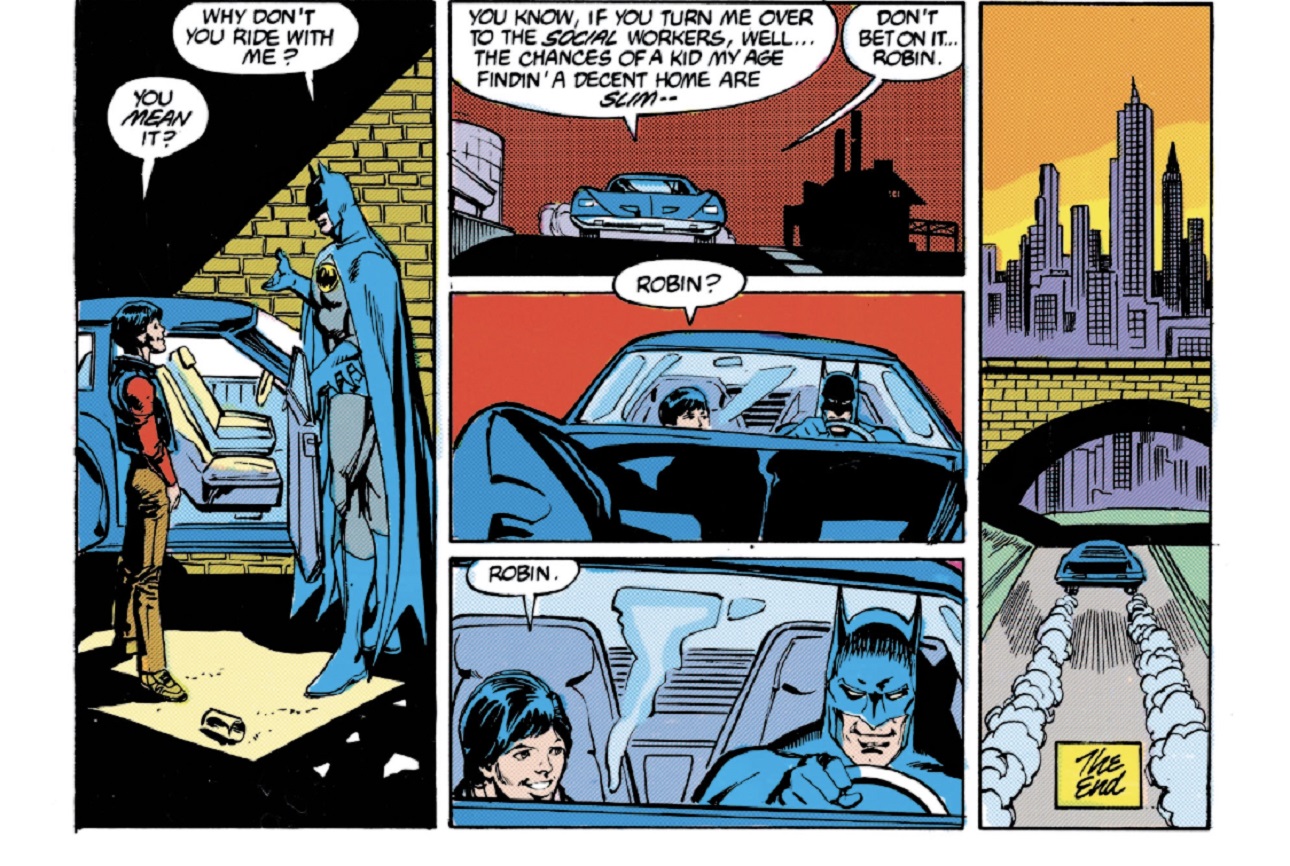 After the reality altering events of Crisis on Infinite Earths, DC’s superhero line was given a chance to clean up their continuity. While some heroes like Superman went for complete reboots, Batman kept most of his history intact, with one notable exception – Jason Todd’s origin. Some readers felt that Jason Todd’s circus roots made him nothing more than a carbon copy of Dick Grayson, so DC decided to rewrite the Boy Wonder’s history in Batman #408.

Batman met the Post-Crisis version of Jason Todd when the street urchin stole the tires from his parked Batmobile. Batman was amused and curious by the resourceful orphan, and initially placed him in Ma Gunn’s School for boys. Batman was unaware that Ma Gunn’s school was a front for her criminal operation, which Jason helped the Dark Knight take down. With nowhere else for the boy to go, Batman decided to make Jason his new Robin in Batman #409. Jason’s adoption and training occurred off-panel during a timeskip, since fans had recently seen those storylines go on for years with Jason’s Pre-Crisis counterpart. The Post-Crisis Jason Todd was ready to get down to business, and there was no time to waste.

Robin passed his first major trial when he showed restraint during a fight with Two-Face, despite learning that the criminal had murdered Jason’s father in Batman #411. Unfortunately, Jason wouldn’t always show the same self-control. While some writers portrayed Robin as an innocent and eager youth, other stories played up Jason’s attitude, stemming from the years he spent alone on the streets. 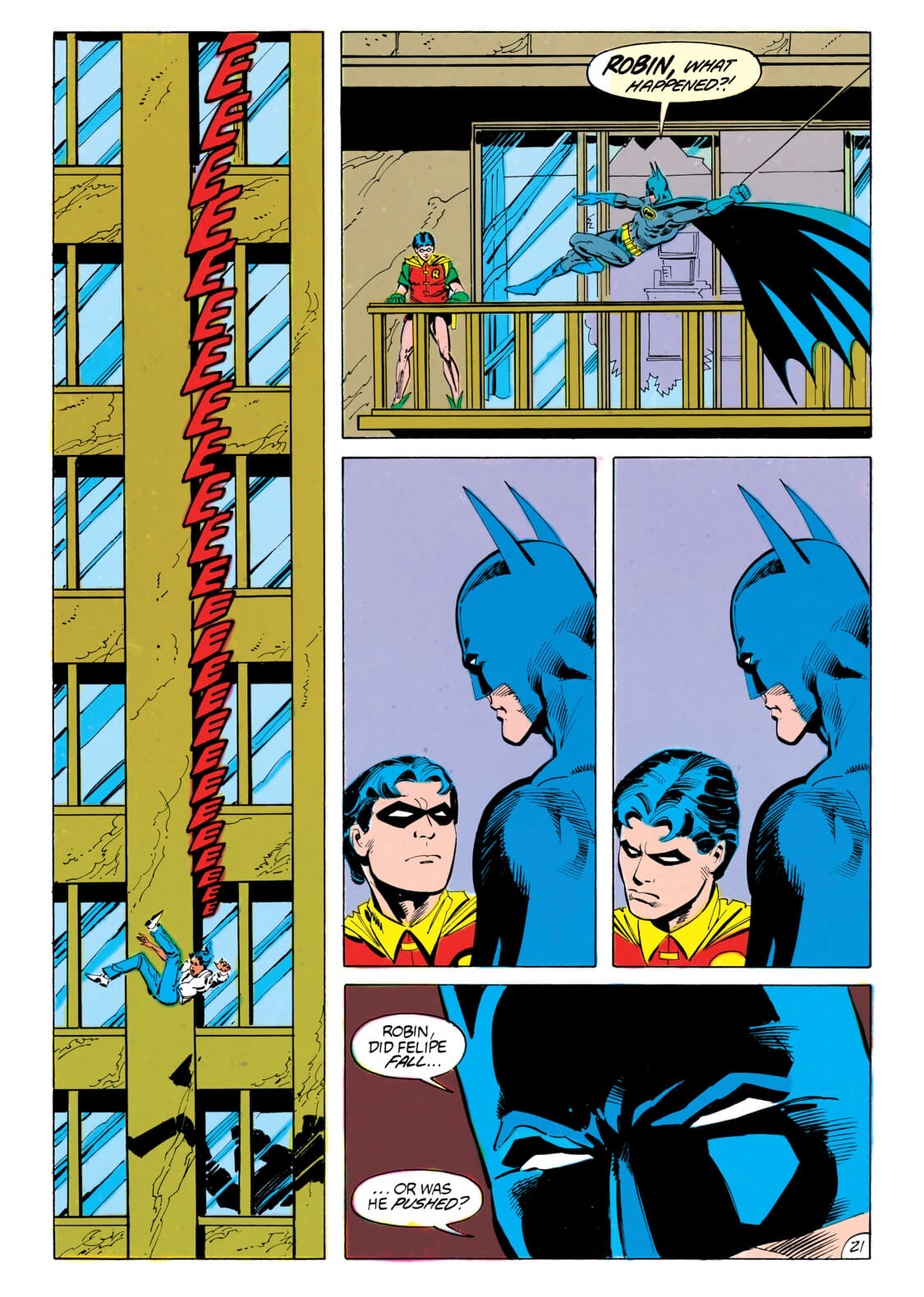 One of the most notable examples occurred in Batman #424, when Robin confronted an abuser and drug dealer named Felipe Garzonas. Robin is enraged when he learns that Felipe will escape justice, because he’s an ambassador’s son with diplomatic immunity. Jason goes to confront Felipe after one of his victims commits suicide. When Batman arrives at the balcony of Felipe’s suite, he’s too late to stop the criminal from falling to his death. Robin tells Batman that Felipe slipped after he spooked him, but the Dark Knight doesn’t buy it. The Felipe incident deeply disturbs Batman, who wonders in Batman #425 if it was a mistake to make Jason his partner. 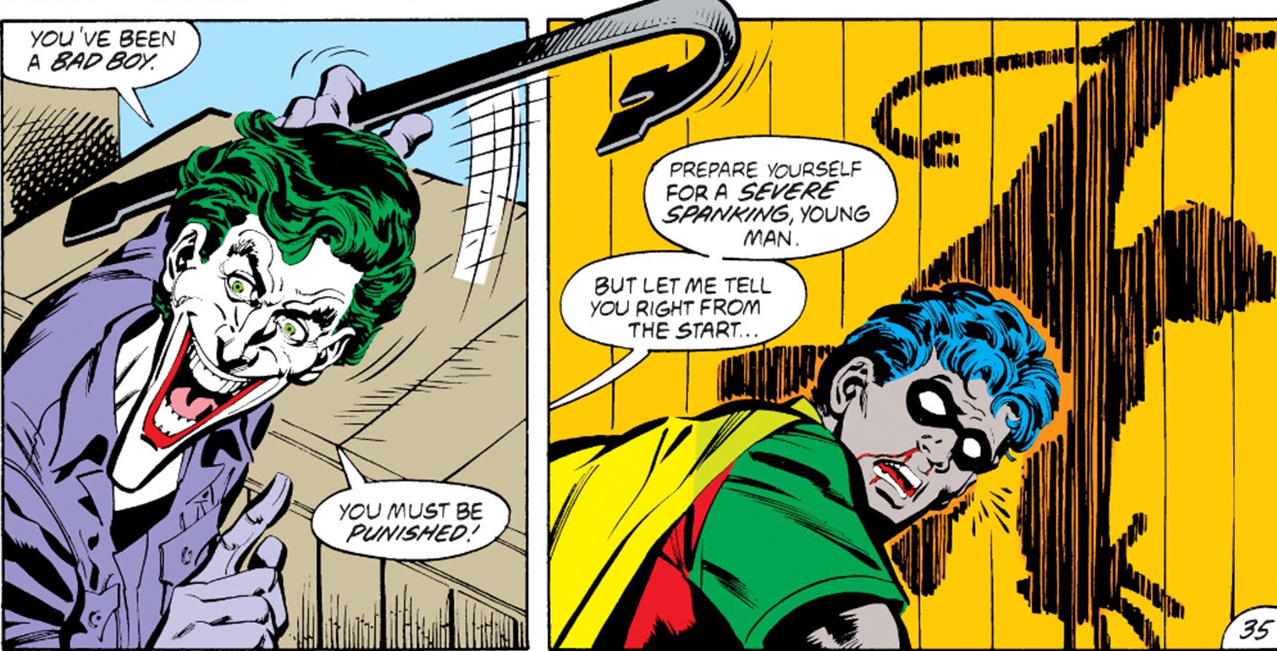 While Jason Todd’s reinvention helped distinguish him from Dick Grayson, some readers thought things went too far in the wrong direction.  Some fans found his attitude obnoxious, and rejected the new rebellious take on Robin. Maybe Jason Todd was ahead of his time? In 1988 DC decided to leave Robin’s fate up to the readers.

A storyline called “Death in the Family” began in Batman #426, where Jason Todd learned that his birth mother was still alive. Batman helped Robin track his mother to Ethiopia, where the Boy Wonder learned that his mother Sheila Haywood was being blackmailed by the Joker. Robin disobeyed Batman’s orders, and confronted his mother on his own in Batman #427. Sheila turned her son over to the Joker, who beat him viciously with a crowbar. The Joker betrayed Sheila, and left her tied up in a warehouse with a bomb, alongside her bruised son.

Jason awoke and attempted to save his mother, but the bomb went off before they could escape. The issue ended on a cliffhanger, with readers instructed to call one 1-900 number if they wanted Robin to survive, and another 1-900 number if they wanted Jason to perish. With 5,343 voting for death, and 5,271 voting for survival, Jason’s fate was sealed with a 72-vote margin. In Batman #428, the Dark Knight found his partner’s body in the rubble of the explosion, and was dejected to learn that he hadn’t survived. The heartbreaking splash page from Jim Aparo has gone on to become one of the most iconic images in Batman history.  For more information on “Death in the Family” and the vote that led to Jason’s death, check out this article. 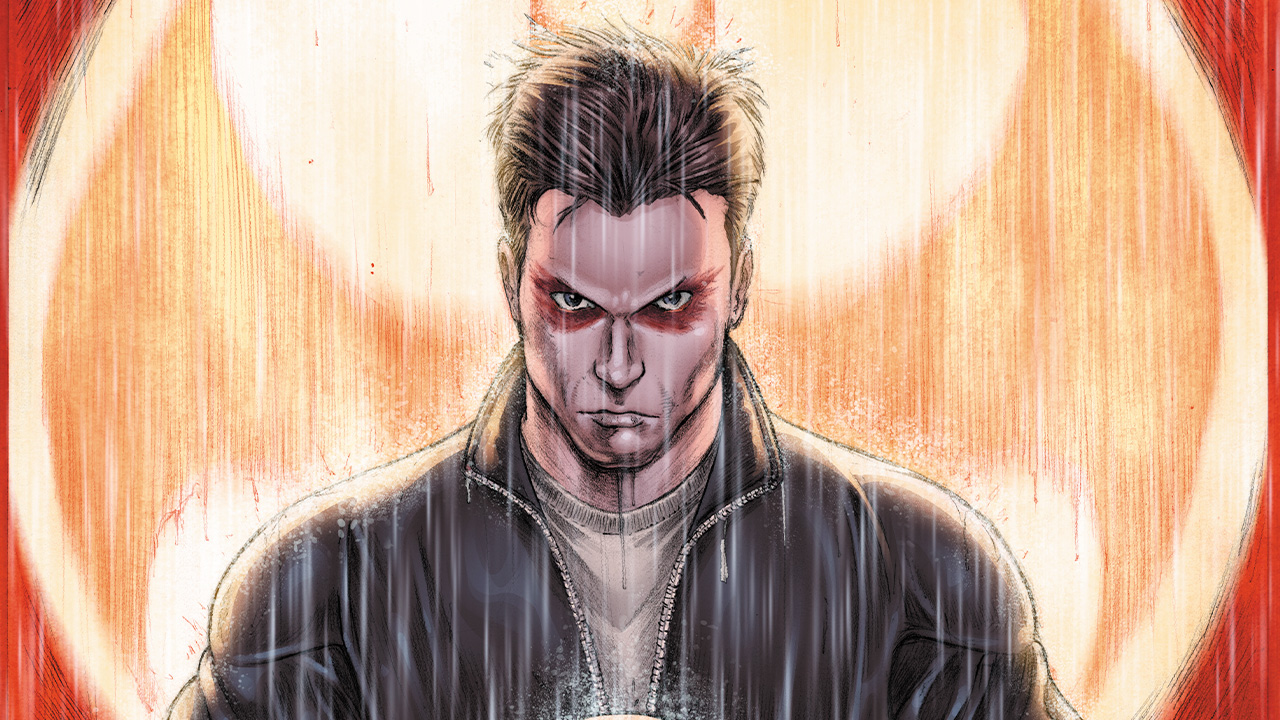 Although Jason Todd was dead, his presence continued to be felt in the Batman titles for years. The loss of Jason forced Bruce and Dick to confront their own fractured relationship (The New Titans #55). A memorial case was erected in the Batcave, and it was a constant reminder for Tim Drake of the dangers that came with being Robin (Batman #456). Jason’s murder altered Batman’s rivalry with the Joker, and the Dark Knight struggled to keep his anger in check during their subsequent battles (Batman #496).

Cosmic interventions and a dip in the Lazarus Pit brought Jason back to life (Batman Annual #25 and Red Hood: The Lost Days), but there was no going back to his days as Robin. Angered by Batman’s inability to save him, and reluctance to kill his murderer, Jason Todd reinvented himself as an anti-hero called the Red Hood. He initially struck out at Batman, angry at him for how his former life ended, but later refocused his efforts towards crimefighting. His methods might not be Batman sanctioned, but he argues they get the job done.

Readers may have voted to kill off Jason years ago, but today he’s more popular than ever. Curran Walters portrayal of the renegade Robin has been an audience favorite on DC Universe’s Titans, with some fans demanding a Red Hood spin-off. A few weeks ago Jason Todd finally came out on the right side of a reader poll and was voted the Sexiest Man in the DC Universe, beating out a bevy of other beefcakes.

Although Jason’s current MO might cause people to believe he’s rejecting everything about his former life, 2011’s Red Hood and the Outlaws #3 revealed that his time as Robin is his most treasured memory. He’s no longer a Boy Wonder, but Robin is a big part of who he is today.

TOMORROW: Jason Todd may have died, but the Robin identity continued to live on. Join us as we spotlight detective extraordinaire Tim Drake!

* Detective Comics #526 – Jason’s parents are killed while helping Dick investigate Killer Croc. Jason discovers the true identities of Batman and Robin, dons a costume for the first time, and Bruce Wayne offers to adopt him.

* Detective Comics #531 – After much reluctance, Batman finally agrees to let Jason train to be his partner.

* Batman #366 – Jason Todd dyes his hair black, and dons the Robin costume for the first time.

* Batman #368 – Jason Todd’s debut as Robin, as Dick Grayson returns to the Batcave to officially pass the torch.

* Batman #381 – Natalia returns Jason to Wayne Manor, stating that Bruce is better suited to be his guardian.

* Detective Comics #554 – Robin teams up with Harvey Bullock for the first time, beginning a fun partnership that goes through the remainder of this era.

* Detective Comics #556 – After a brief investigation, Bullock tells Commissioner Gordon that the original Robin has been replaced by a new boy. Gordon says that he noticed from the start, but decided not to say anything.

* Batman #399 – After months of being distracted by his relationship with Rena, Jason recommits to his role as Robin.

* Batman #408-411 – Jason Todd’s origin is revamped for Post-Crisis continuity. The new Robin is now a street orphan who the Dark Knight met after he tried to steal the Batmobile’s tires.

* Batman #416 – Jason Todd meets Dick Grayson for the first time. Nightwing gives Jason his original Robin suit, and tells him that he’s only a phone call away when things get rough.

* Batman #424 – Robin is enraged when a ambassador’s son uses diplomatic immunity to escape justice. When the criminal falls from a balcony, Batman is unsure if he slipped or Robin pushed him.

* Batman #426-429 – Robin is killed by the Joker after traveling to Ethiopia to find his biological mother.

Are you a hardcore Robin fan, or just looking to learn more about the Boy Wonder? Check out all the Robin-centric activities that our clubs are running in the Community Events Calendar!