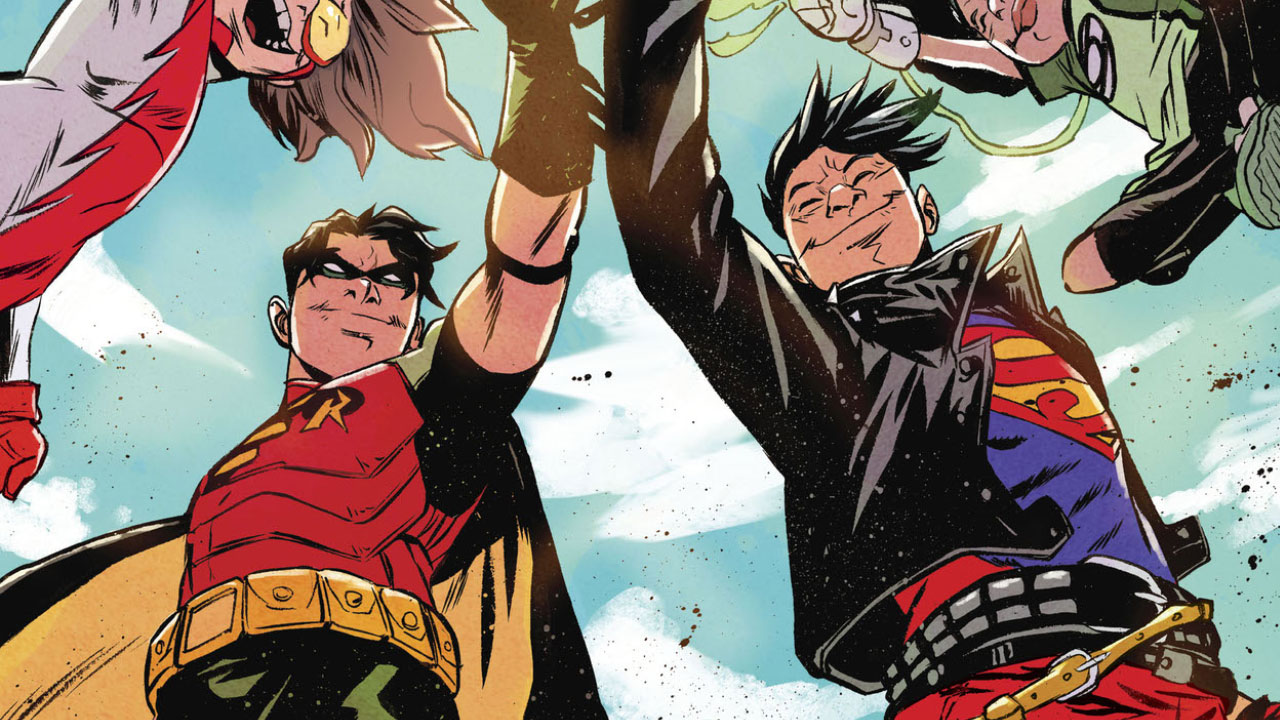 Robin & Superboy: The Greatest Teen Romance That Never Was

Superhuman or not: whenever you get a bunch of teenagers in a shared living space together, hormones are going to take over. From its very foundation, Titans Tower has always been home to messy romances and messier drama. The most beloved of ships have launched and sank upon its rocky shores, to be regarded as some of the greatest love stories in the DC Universe. Nightwing and Starfire. Beast Boy and Terra. Tim Drake and… Conner Kent. That’s right, you heard us. Though treated mainly as subtext since moving into Titans Tower from their Young Justice days together in 2003, the third Robin and the cloned Superboy were consistently depicted as the closest of friends for over a decade. And perhaps, at times, something more than friends; each harboring a buried longing for the other which went unsaid. Preposterous? We disagree. If you look for it, the clues are all there.

TRAPPED IN THE CLOSET 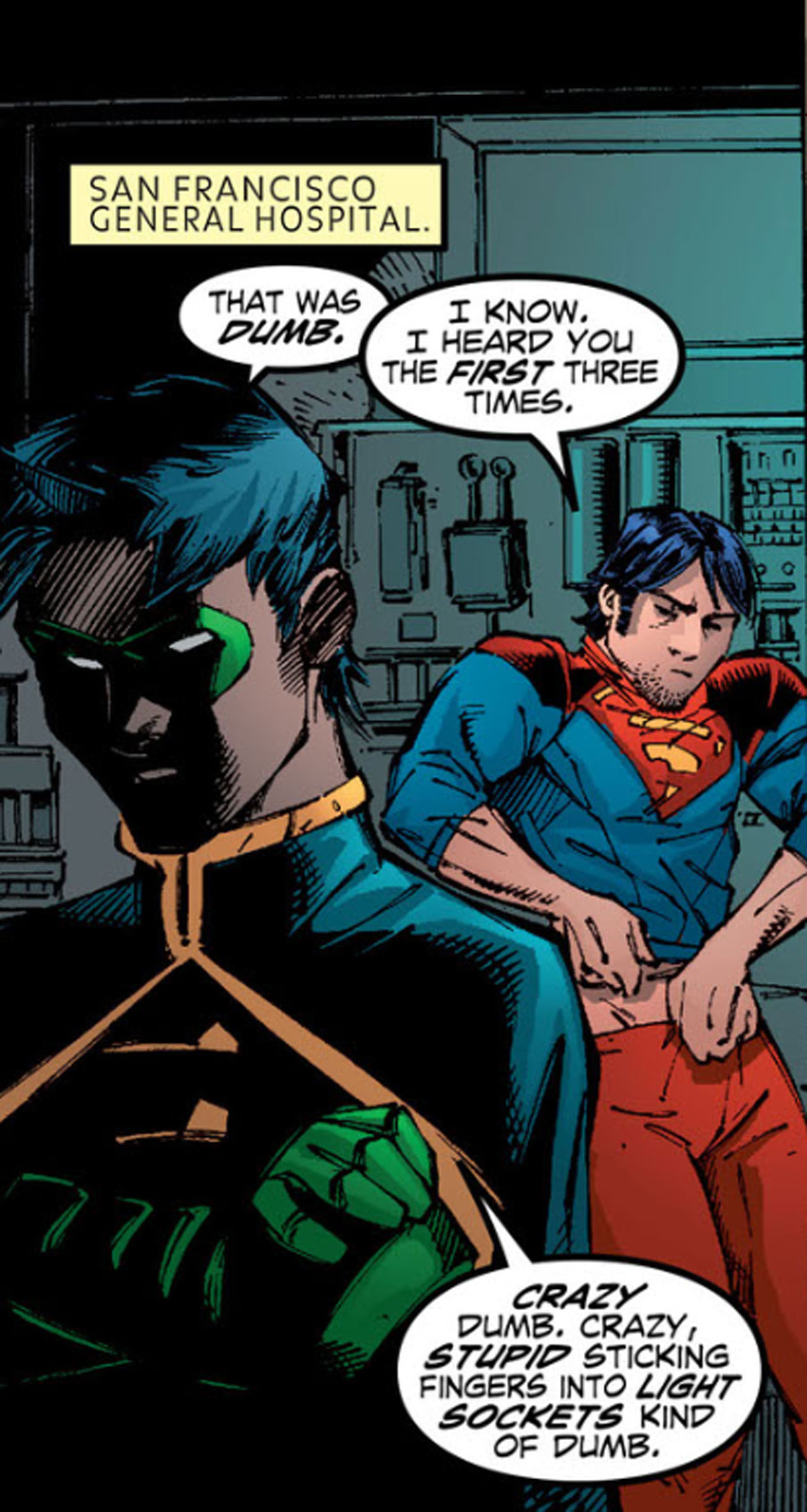 The 2003 crossover event TITANS/YOUNG JUSTICE: GRADUATION DAY was more than a mere limited series: it was a launching point for the status quo of what would become the next generations of the Teen Titans and the Outsiders. And how are we introduced to the new status of Tim and Kon-El’s dynamic for the years to come, as they reach a new stage in their pubescence? By bickering like a married couple as they change clothes in a medical supply room. Yes, that’s right: they’re literally in the closet together. Right from the turning point in this chapter of their lives, Tim and Conner exhibit a level of intimacy and familiarity that instantly invites speculation into something more. 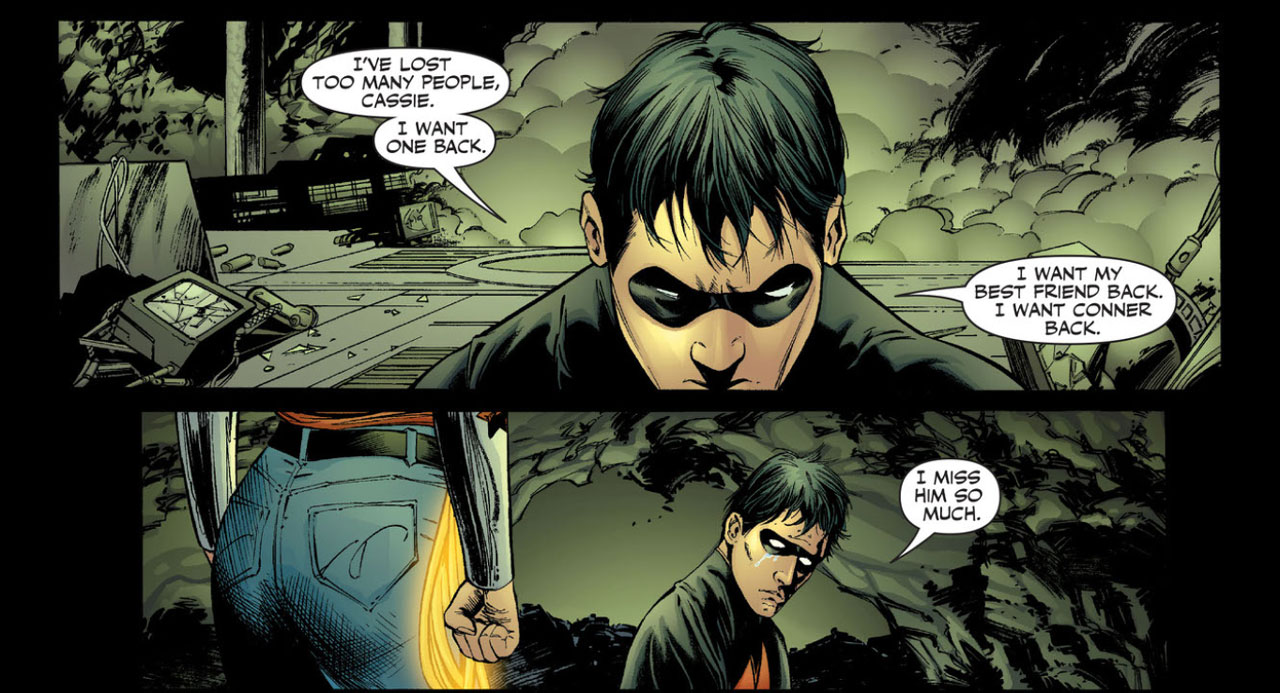 Everyone deals with grief differently. The closer you are to the departed, the harder it can be to understand. In the climactic battle of INFINITE CRISIS, Superboy gave his life in a battle against the despotic Superboy-Prime… and nobody took it harder than his girlfriend, Wonder Girl, and his boyfriend, Robin. Cassie Sandsmark took the religious route, and ended up joining a cult dedicated to his resurrection in the year-long series 52. Tim, on the other hand, turns to science. As Cassie learns in the “One Year Later” story arc of TEEN TITANS, Tim manically attempted to clone Conner 99 times in secret, just so he could see Conner’s sweet face one more time. In their shared grief, Tim and Cassie seek comfort in each other’s arms -- each one clearly picturing the same person in their ersatz lover’s stead. 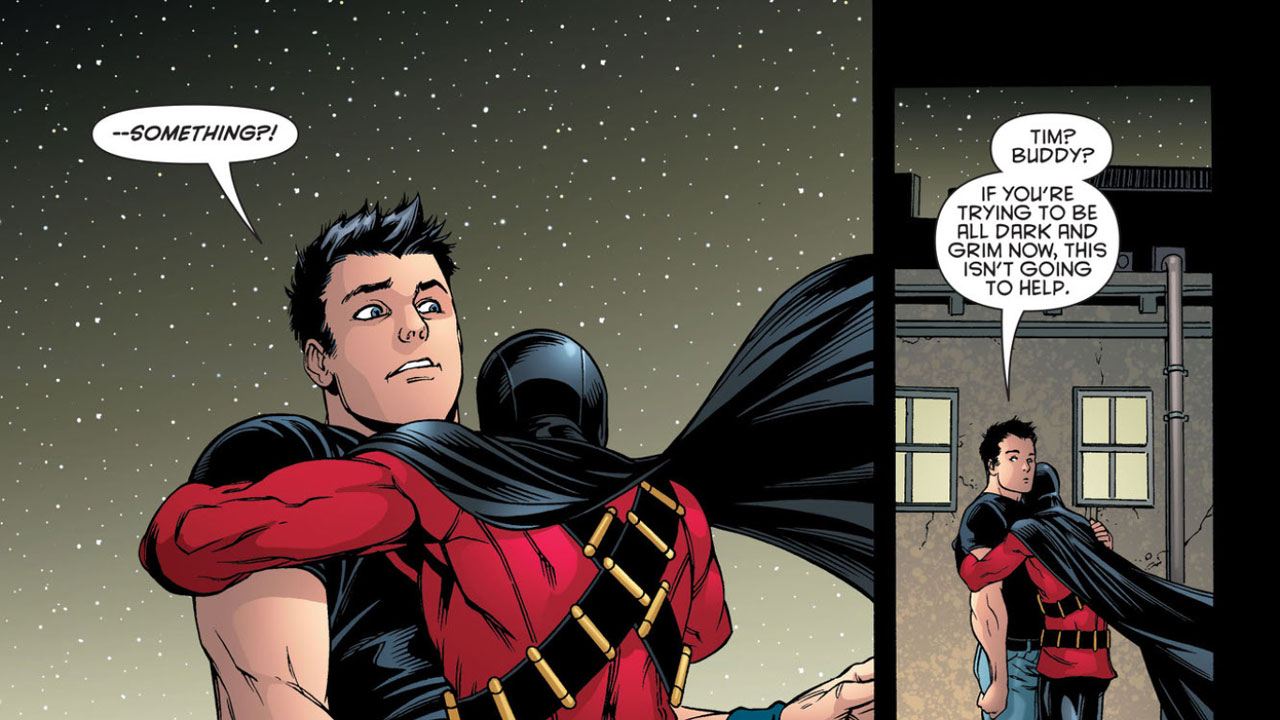 Of course, when Conner eventually does turn up alive again (it’s a whole thing with FINAL CRISIS and the Legion of Super-Heroes), Tim is so moved by his return that he breaks from his year-long sojourn in darkness to find his time-tossed mentor Batman, and allows himself a moment of vulnerability and unbridled joy. Only Conner could break through to the “Red Robin” at his most crimson.

Finally, at least in one sense, during one of their final missions together before 2011's FLASHPOINT, Conner reflects on the new Robin, assuring Tim he’ll never be replaced in his eyes. Tim returns the sentiment in kind, the only way he knows how...

In the New 52 era, a very different Red Robin and a very different Superboy appear together in two new incarnations of the Teen Titans. Superboy is a clone of the son of Superman and Lois Lane from a possible future. Tim Drake may not even be Tim Drake, having altered his own identity. At the time, it was debatable if he had ever even worked with Batman before as Robin. But one thing that not even FLASHPOINT could change was their forbidden, subtextual love and devotion for each other.

A classic blunder. Tim’s clearly uncomfortable expressing his feelings, and is waiting on Superboy to make the first move here. Leave it to the son of a Bat to be emotionally stunted. 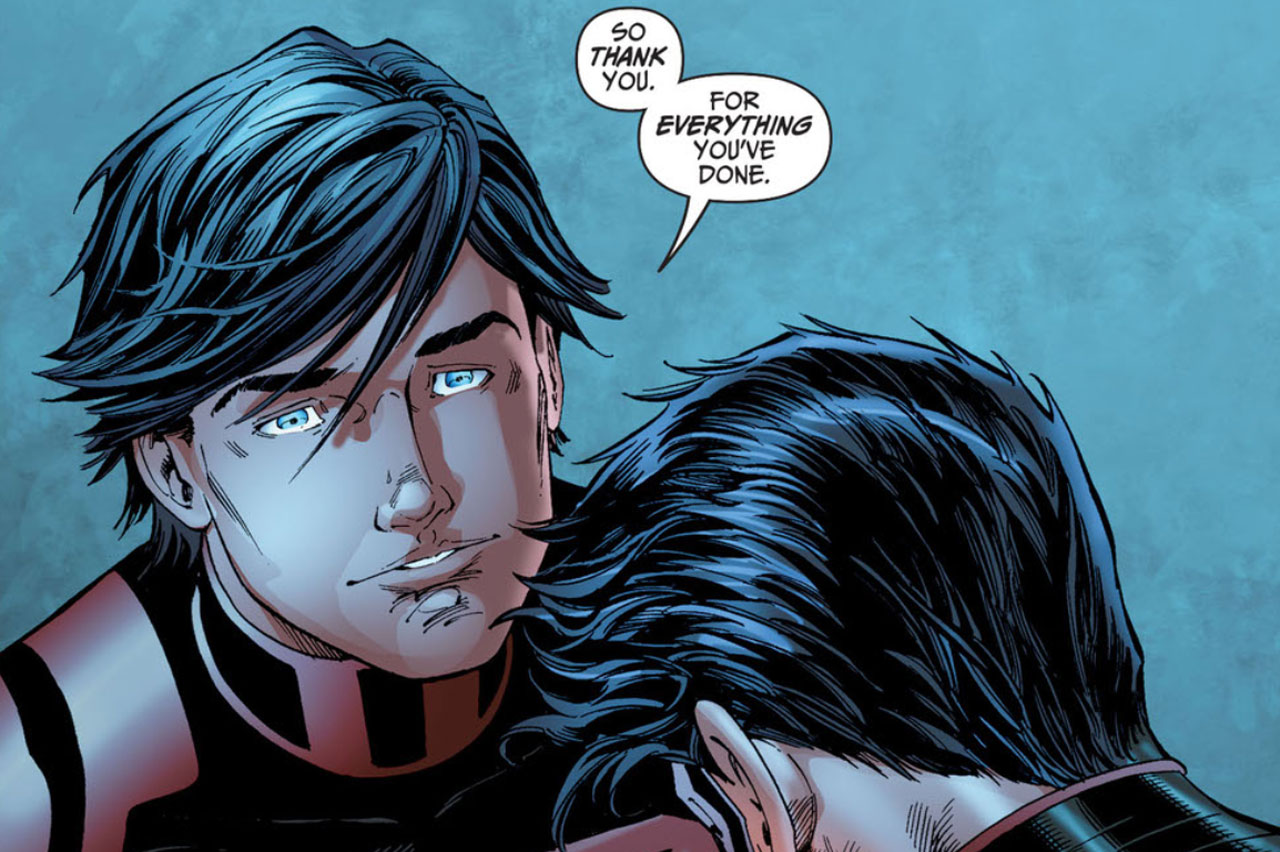 But here, years later (at least, in publication), we see that Superboy may have caught up to Tim’s intention -- and lets him know that it’s okay. He knows Tim can’t express how he truly feels, and he accepts their love for what it is. And to that, all we can say, with all due respect, is: JUST KISS ALREADY. **GEEZ.**

AND DON’T IT ALWAYS SEEM TO GO, THAT YOU DON’T KNOW WHAT YOU GOT ‘TIL IT’S GONE

In the aftermath of DC UNIVERSE: REBIRTH -- not to mention some heavy course correcting from BATMAN & ROBIN ETERNAL -- Tim Drake was restored to his old, pre-FLASHPOINT self… but Conner Kent remained missing from his life, present only as an aching absence, an abscess in his heart which could not be filled but for the presence of this young man he could recall no longer.

Eventually, because the gods are merciful, Tim and Conner would be reunited in the modern reincarnation of Young Justice -- though as that young hero now known for better or worse as Drake is in an apparently monogamous relationship with Stephanie Brown, it seems that the moment in the sun together for this World’s Finest Young Romance has passed… at least, for the time being. Don’t let Bruce’s bad habits rub off on you, Tim. You shoulda spoken up when you had the chance.

In conclusion: the word “bromance” is for cowards. The term you’re thinking of is “lovers.”

Note: This article is dedicated to Dixon Gaines, our intrepid associate editor of lo these past 14 months, and the world’s Number One Tim Drake fanboy.

Which of your favorite couples still yet lurk beneath the surface of continuity, their mutual longing left unspoken… at least for now? Let the shipping wars begin in our Community!