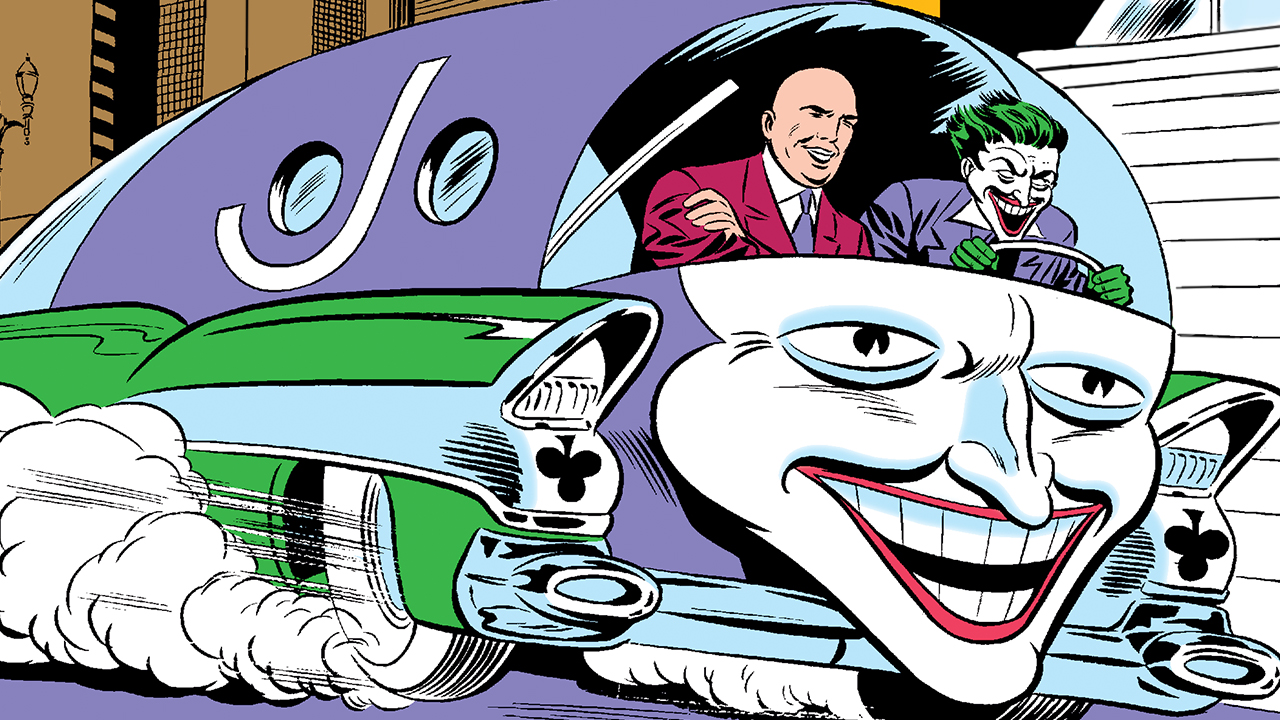 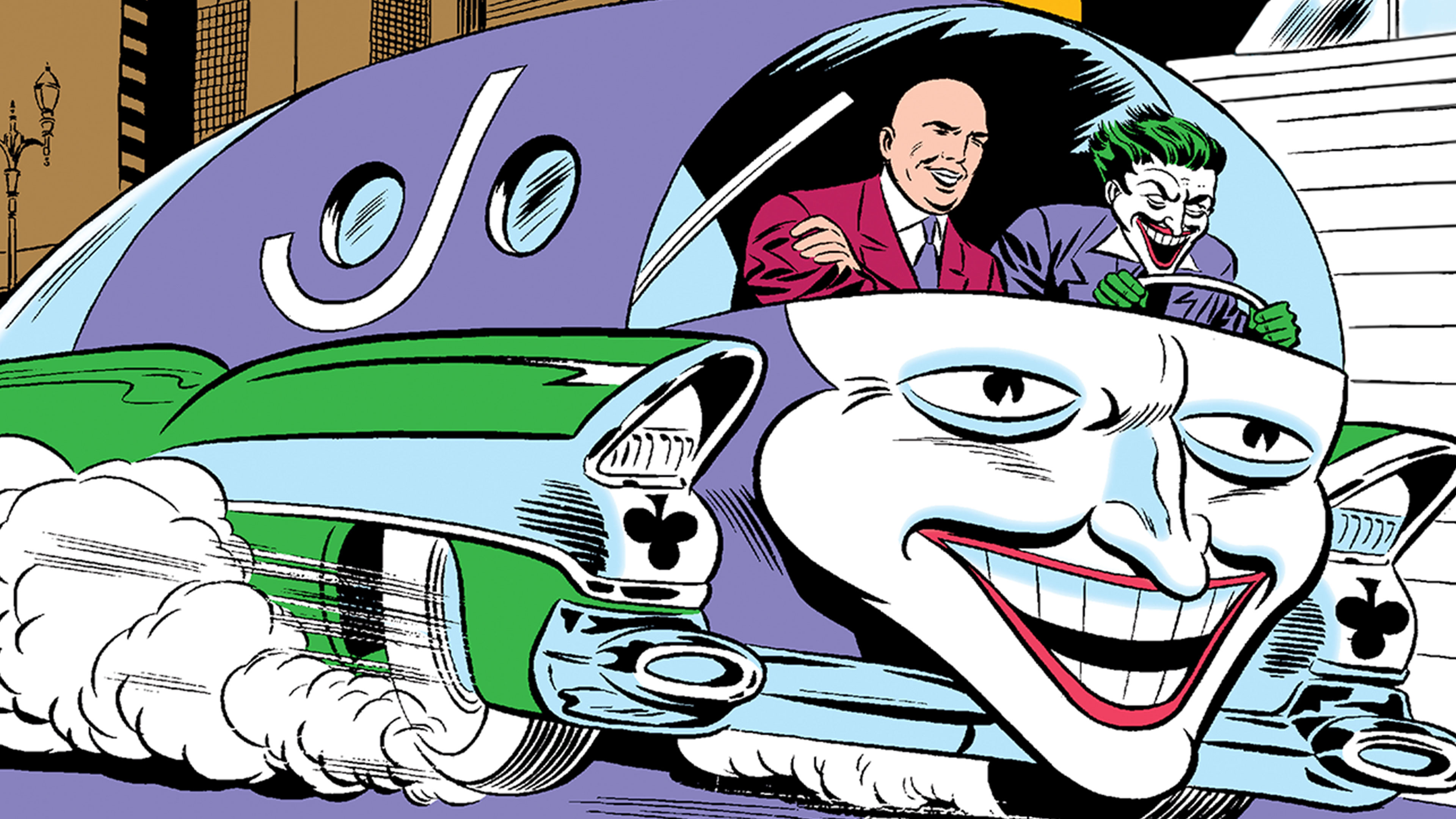 The Many Faces of the Joker: Silver Age Shenanigans

He might be a clown, but this villain is no joke! All week long we’re celebrating Batman’s greatest enemy, leading up to the release of 'Joker' starring Joaquin Phoenix. Yesterday we took a look at the Joker’s homicidal Golden Age beginnings, and today we’re covering the Clown Prince of Crime im the Silver Age of Comics, in which he took a sillier, campier character turn... 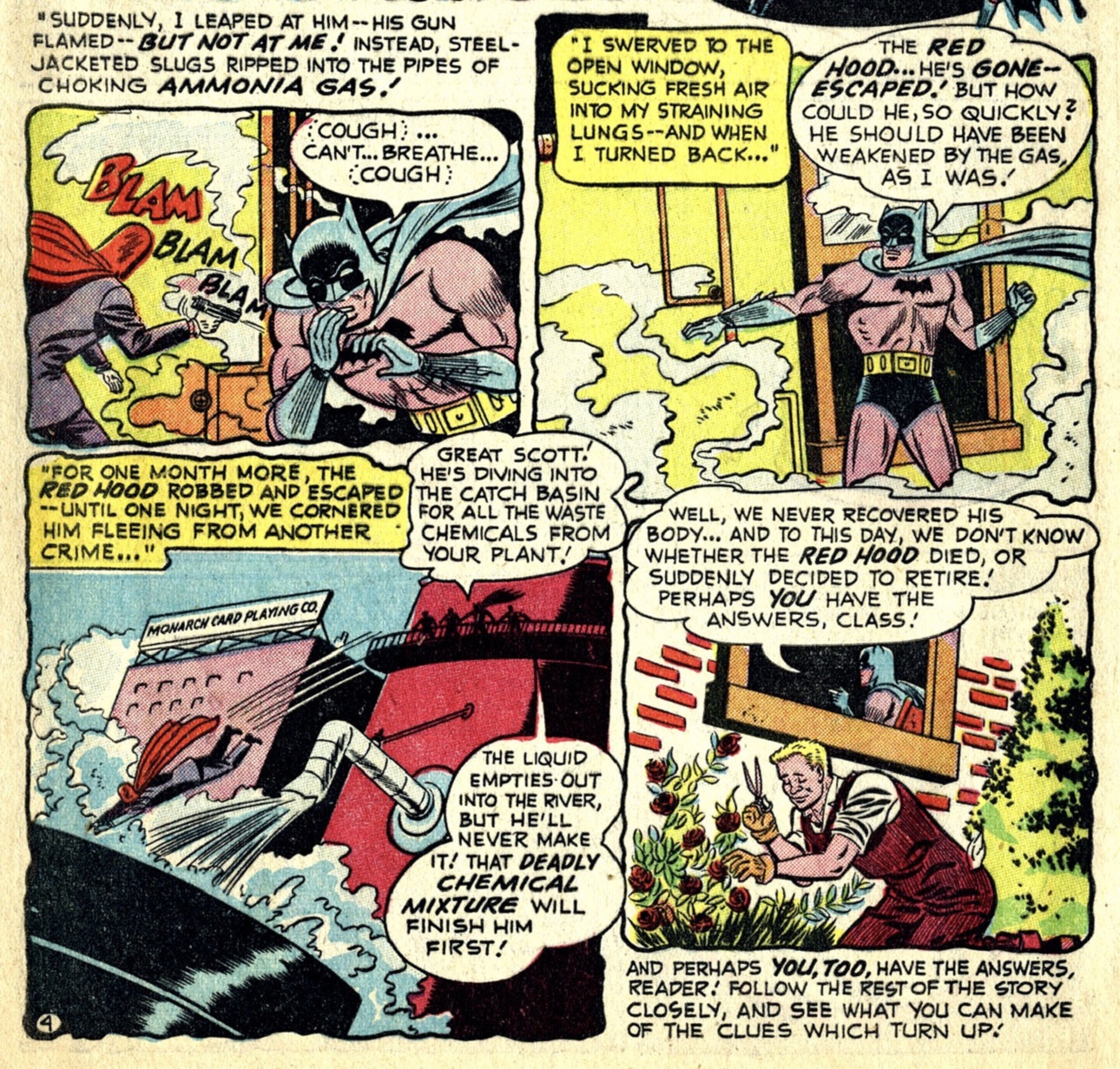 One of the Joker’s earliest Silver Age adventures wound up becoming one of his most important ones. In ‘Detective Comics’ #168 Batman and a group of college students reopen a cold case regarding the mysterious disappearance of a criminal called the Red Hood. Flashbacks reveal that the Red Hood was a criminal Batman fought during the early days of his career, until he disappeared by diving into chemical waste. 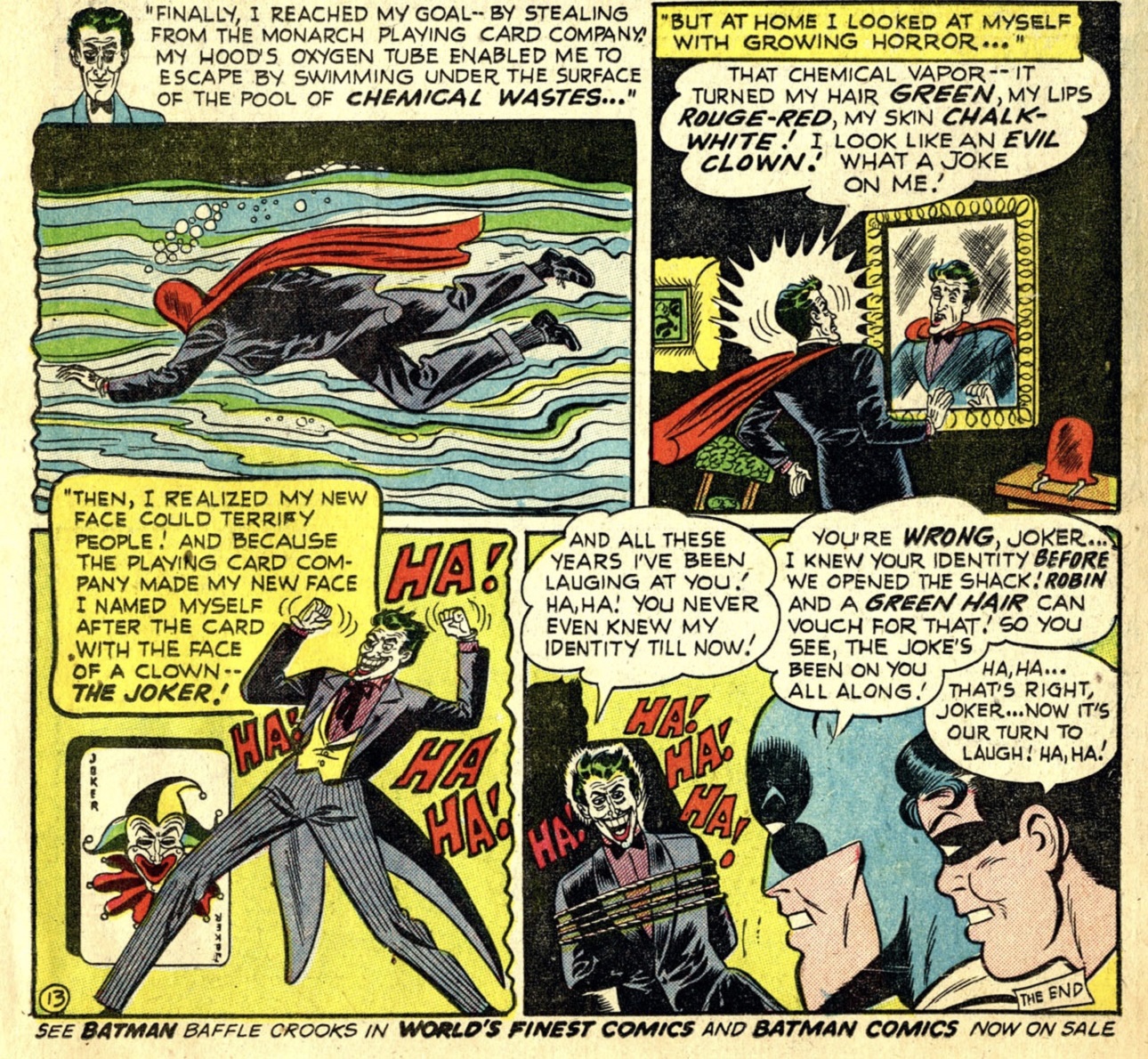 The story concludes with the revelation that the chemical swim altered the Red Hood’s appearance and turned him into the Joker. The story was published in 1951, 11 years after the Joker first debuted. We may take it for granted now, but in the early days of comic-dom most villains weren’t given origins or real names, they were simply bad guys for our heroes to fight. In fact, the assumption before this story was that the Joker’s skin and green hair was clown makeup.

Since this story was published, the Joker has had many different origins, but most versions at least take elements from this story. This was the first to establish that Joker had operated as Red Hood before he gained his clown appearance, and this comic was the first story to show Joker falling into a vat of chemicals, something that has been used in ‘The Killing Joke’ graphic novel, Tim Burton’s 1989 ‘Batman’ movie and television’s ‘Gotham.’

Speaking of historical context, you may have seen the above panel shared on the internet at some point. Yes, it’s real. The moment comes from a classic 1951 story called “The Joker’s Comedy of Errors” found in ‘Batman’ #66. Please understand, instead of saying “weird flex” or “epic fail” people called their mistakes “boners” before the word became a popular euphemism for something else. If you can get through the story without snickering, it’s actually a pretty funny comic where the Joker becomes frustrated by his constant humiliations and unsuccessfully attempts to turn the tables on the Dark Knight. But nothing could prepare readers for the Joker’s cruelest crime ever in ‘Batman’ #74… 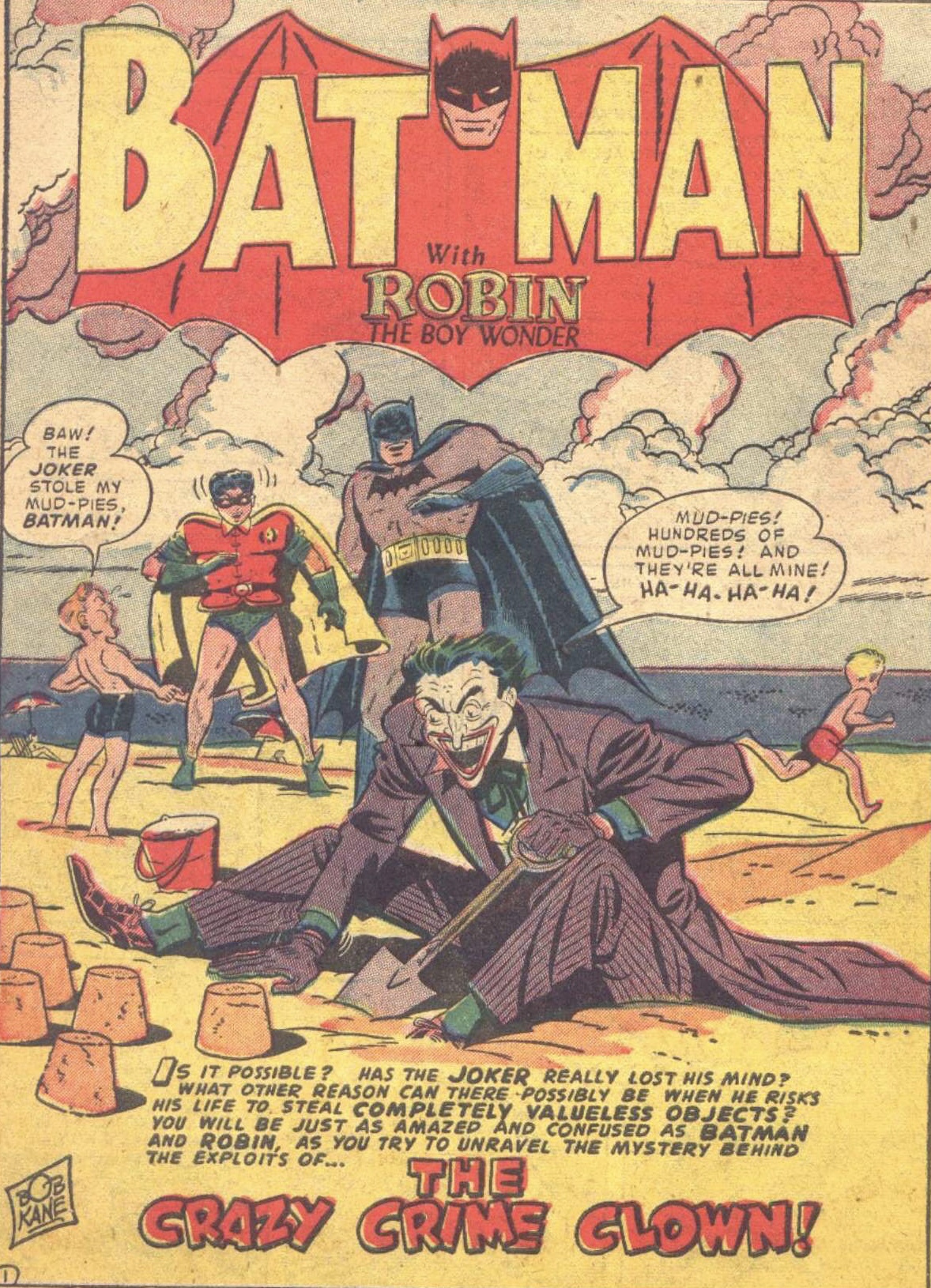 We all know about the time that Lex Luthor stole 40 cakes (and that’s terrible), but that’s nothing compared to the Joker stealing (by his account) hundreds of mud pies! The cruelty! Look at how upset that poor boy is. You can tell he worked really hard on those mud pies and the Joker just snatched them! It’s a good thing Batman and Robin were randomly at that beach in full costume during daylight hours.

The premise of the story is that Joker is faking insanity so he could be placed in an asylum and gain access to another inmate there and learn the location of his fortune. The Joker’s sanity has been questioned many times over the years, with some arguing that he only fakes insanity so he could land in Arkham instead of a regular maximum security center, and this comic certainly helps those theorists. In fact, this story is the first time Joker was seen in a padded cell, since most stories (in the days before Arkham) ended with Joker being put in a traditional prison.

This story was drawn by Dick Sprang, one of the most iconic Batman artists of the 1950’s. His version of the Joker became the gold standard during the early years of the Silver Age and later served as the inspiration for the design on the ‘Batman: The Brave and the Bold’ animated series. 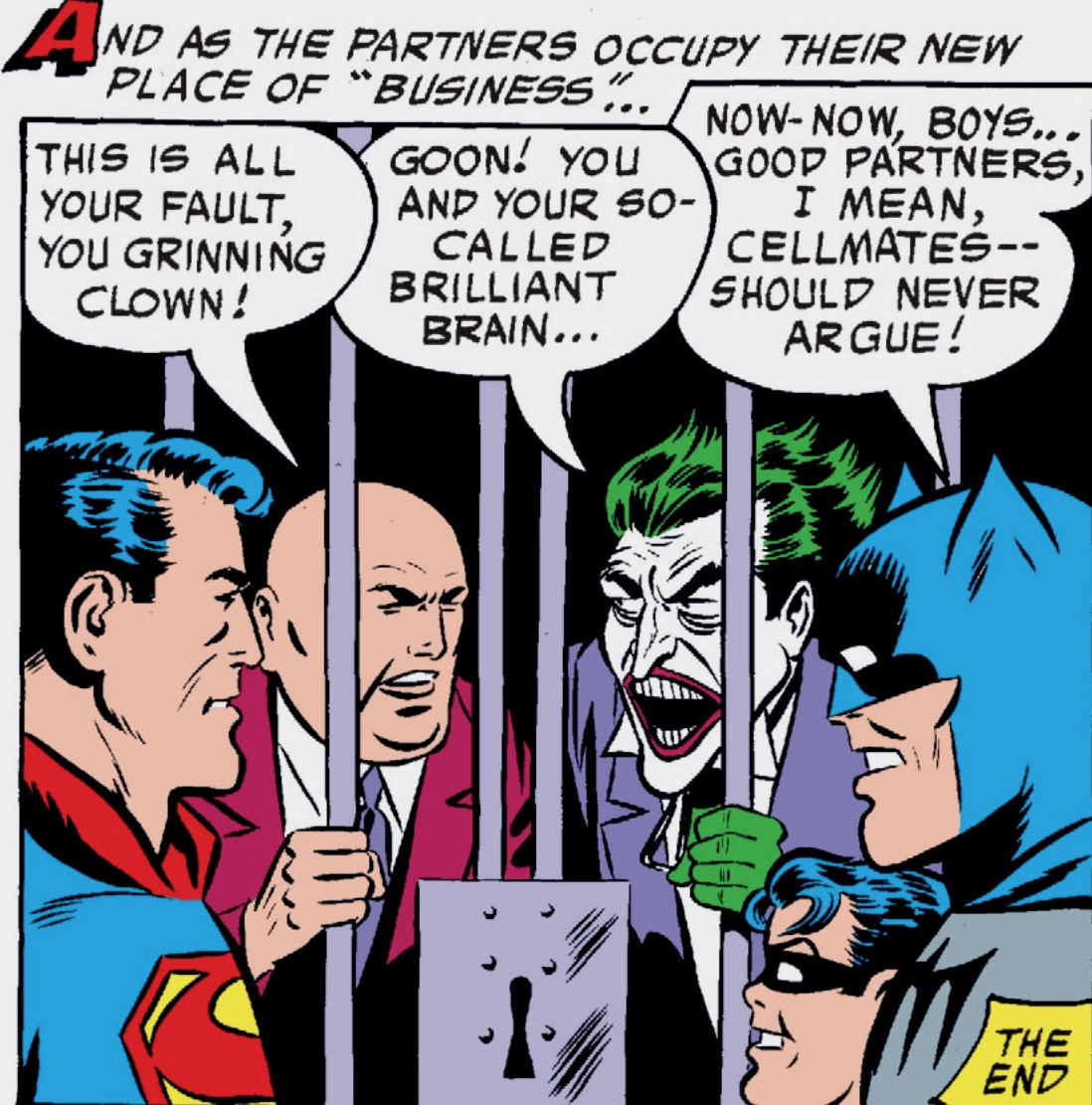 The Silver Age also contained the Joker’s first meeting with Lex Luthor and Superman. In  ‘World’s Finest’ #88, the recently paroled Lex and Joker decide to start a business together which makes Batman and Superman raise their eyebrows. The entire operation turns out to be a cover for a larger crime, and the criminal duo are jailed. Despite the catastrophe of this alliance, Joker and Lex Luthor would continue to have some iconic team-ups over the years, and occasionally the Clown Prince would serve as a Superman villain. 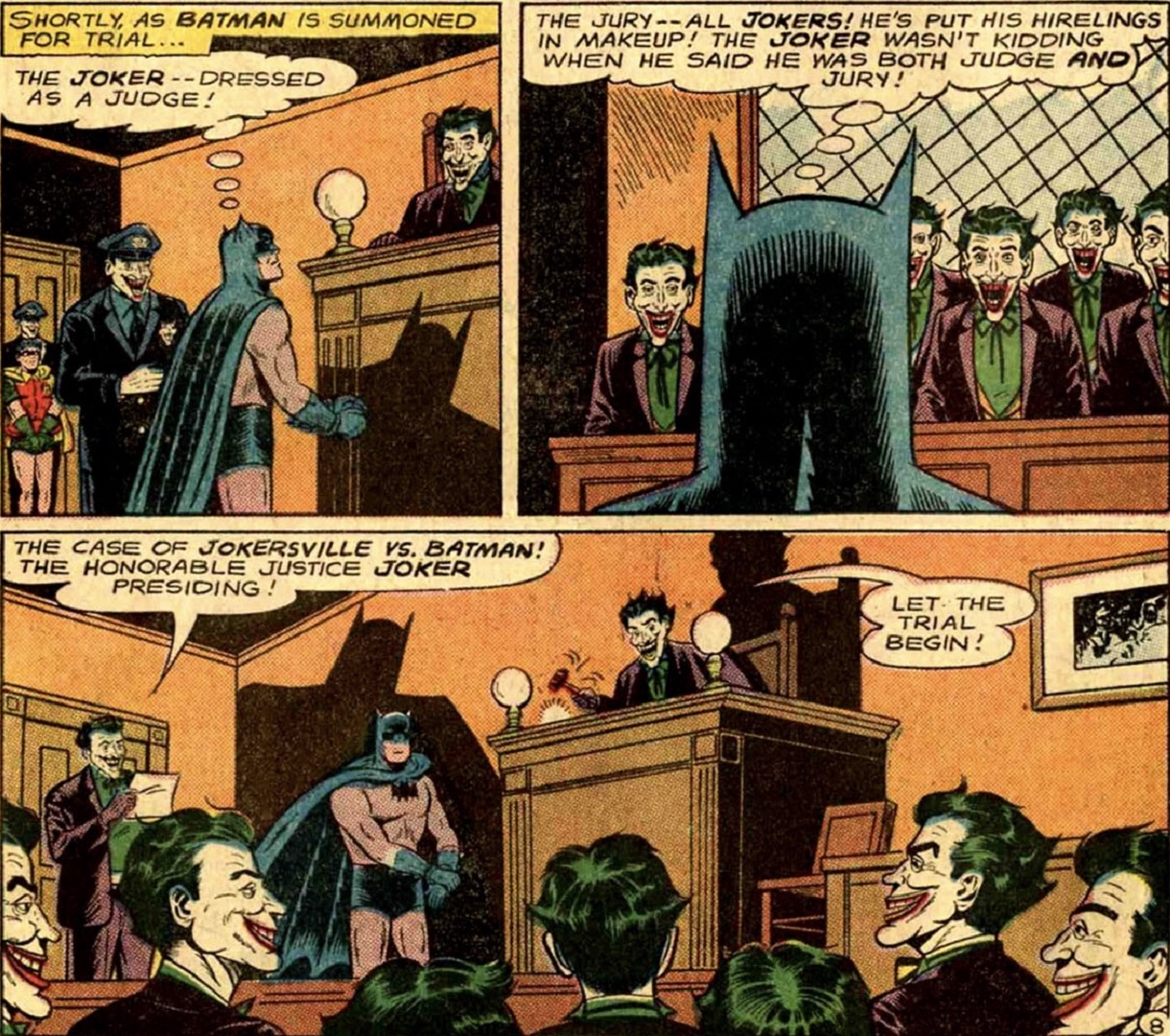 The Joker’s last appearance before Batman’s “New Look” era was a bizarre one. In ‘Batman’ #163 the Clown Prince creates a mock trial for the Dark Knight, complete with a full courtroom of Joker jurors, a Joker bailiff, a Joker Judge and – well, you get the idea. It’s a bit excessive, but this type of lunacy is one of the things that made Silver Age Joker stories fun. The over the top courtroom visual has become one of the most iconic Joker images from the era.

‘Detective Comics’ #332 is Joker’s first appearance in the “New Look” era. There is a common misconception that the Joker was absent for years before the “New Look” era and the Adam West television series brought him back, but that wasn’t the case. Although the Joker wasn’t as popular as his earlier years, he was still making regular appearances in the Batman titles. 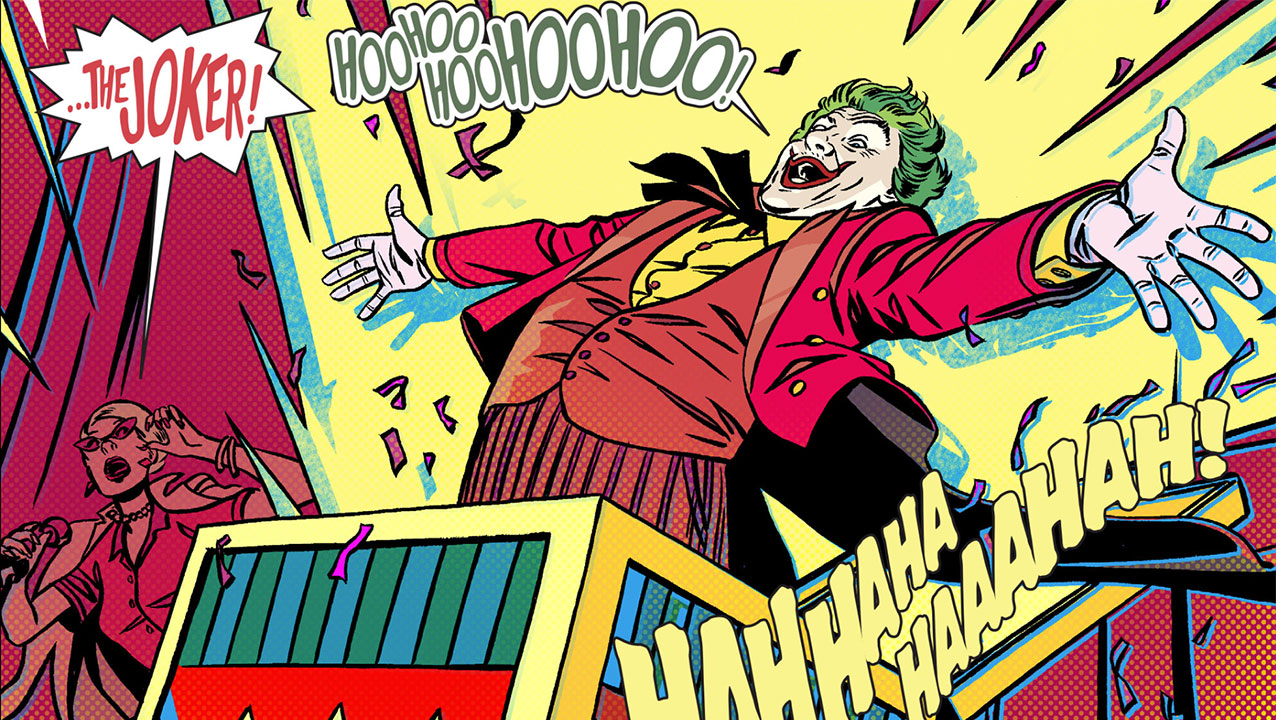 The aforementioned ‘Batman’ television series was a game-changer, and brought Joker from the comic spinner rack, to the living rooms of households around the world. The Joker was portrayed by Latin actor Cesar Romero, whose manic laugh has remained in the public consciousness for decades. His version of the Joker was obsessed with pranks and deathtraps, both of which led to some memorable episodes. Romero refused to shave his mustache, and simply hid it under the white makeup. In the days before high definition television most people didn’t notice. The late 1960’s also brought Joker to animation for the first time. In the 1968 ‘The Adventures of Batman’ cartoon, the Joker was brilliantly voiced by Ted Knight (sometimes miscredited as Larry Storch). The popularity of Romero’s Joker led to the comics taking after him, including the below image from ‘Batman’ #186. Check out that bottom panel from Sheldon Moldoff. It almost looks like a still image from the television series. 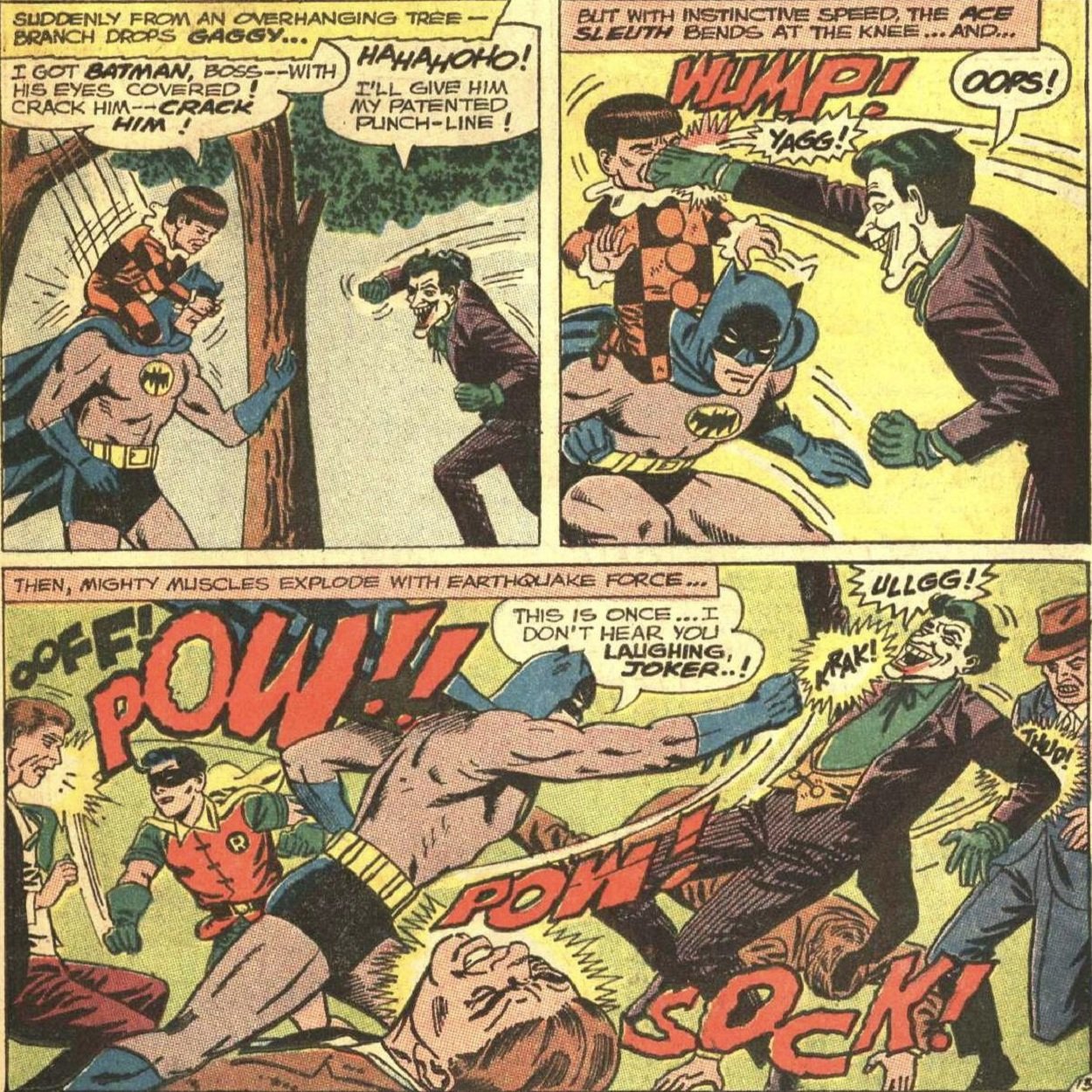 The story also introduced a sidekick for Joker, a short jester named Gaggy. Gaggy’s playful and sycophantic nature made him a valued part of Joker’s gang, despite the Clown Prince accidentally socking him during the campy battle. Despite his memorable introduction, Gaggy never caught on the same way Harley Quinn did, and this would be his last Silver Age appearance. Even if the Joker discarded him, he was remembered fondly enough by fans to be included in the ‘Batman: The Brave and the Bold’ episode “Night of the Batmen!” and he came back for an arc in ‘Gotham City Sirens’ #4-6. 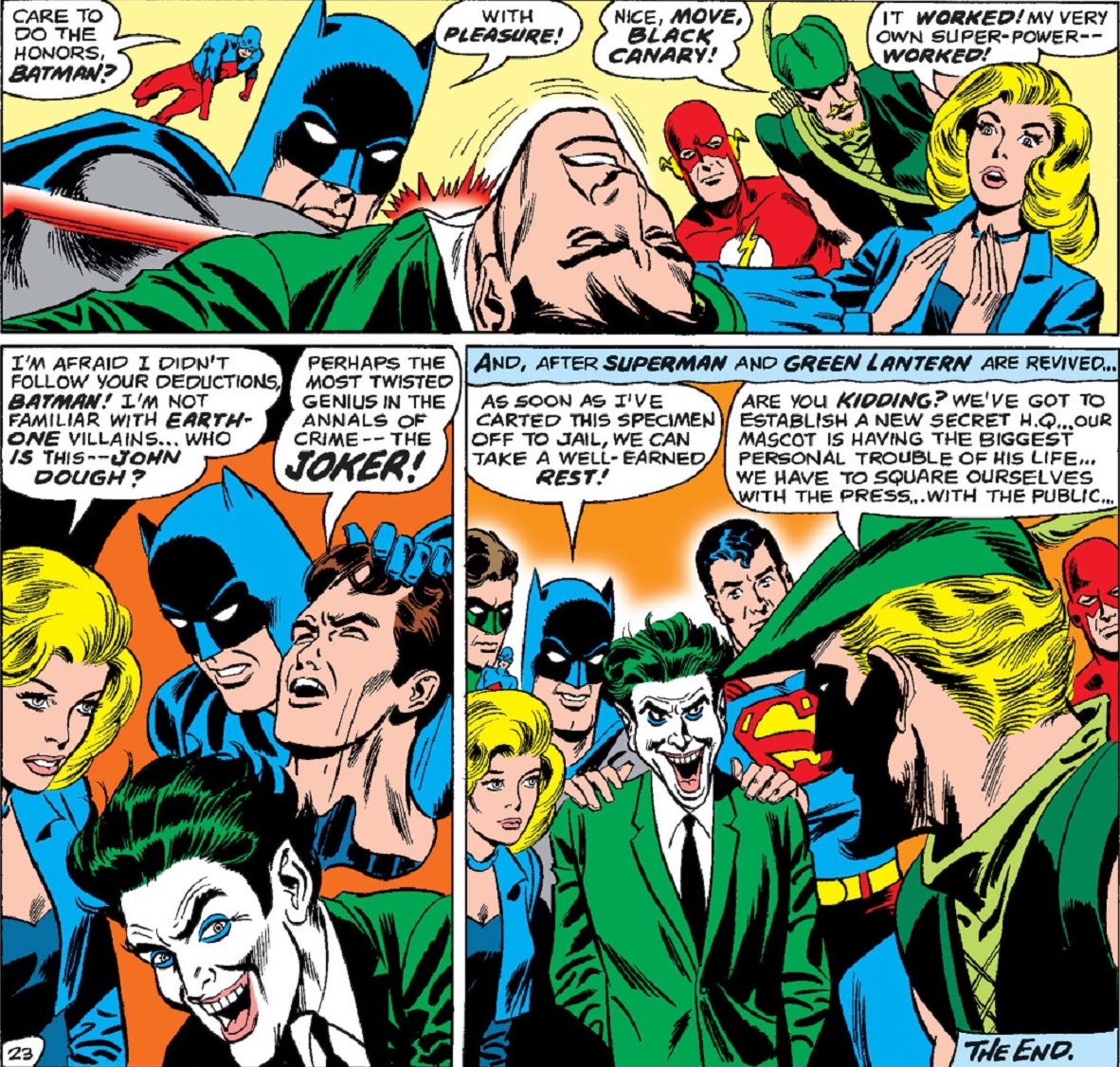 The Joker ended the sixties with a bang, by taking on the entire Justice League in 1969’s ‘Justice League of America’ #77. The Clown Prince disguised himself as Snapper Carr, the League’s teenage mascot, and nearly succeeded in taking the entire team down. This would be the Joker’s last appearance for a few years. After the ‘Batman’ televisions series ended, the comics went in a more grounded and gritty direction, and the colorful prankster version of the Joker didn’t fit in with it. At least not right away...

That’s it for the Silver Age! Join us next time as we look at the Joker’s return to his dark roots in the Bronze Age! In the meantime, check out this recommended reading:

What are your favorite Joker stories from the Silver Age? Let us know in our Community!