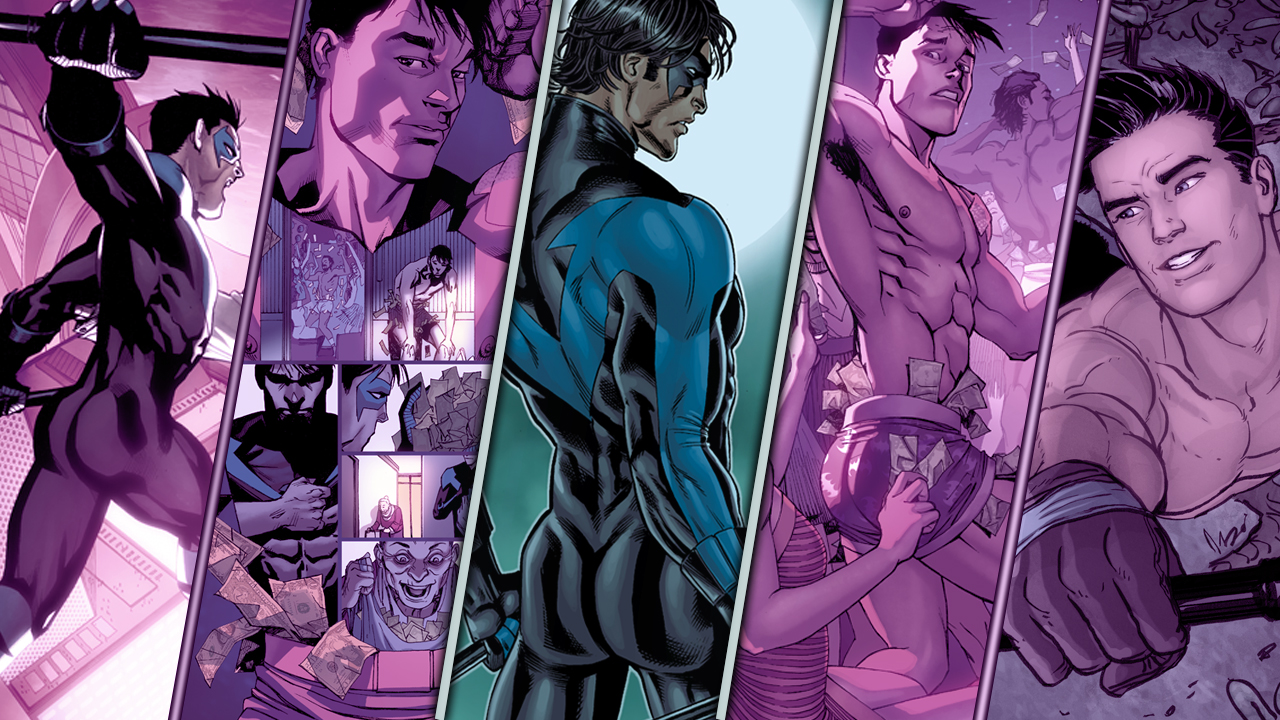 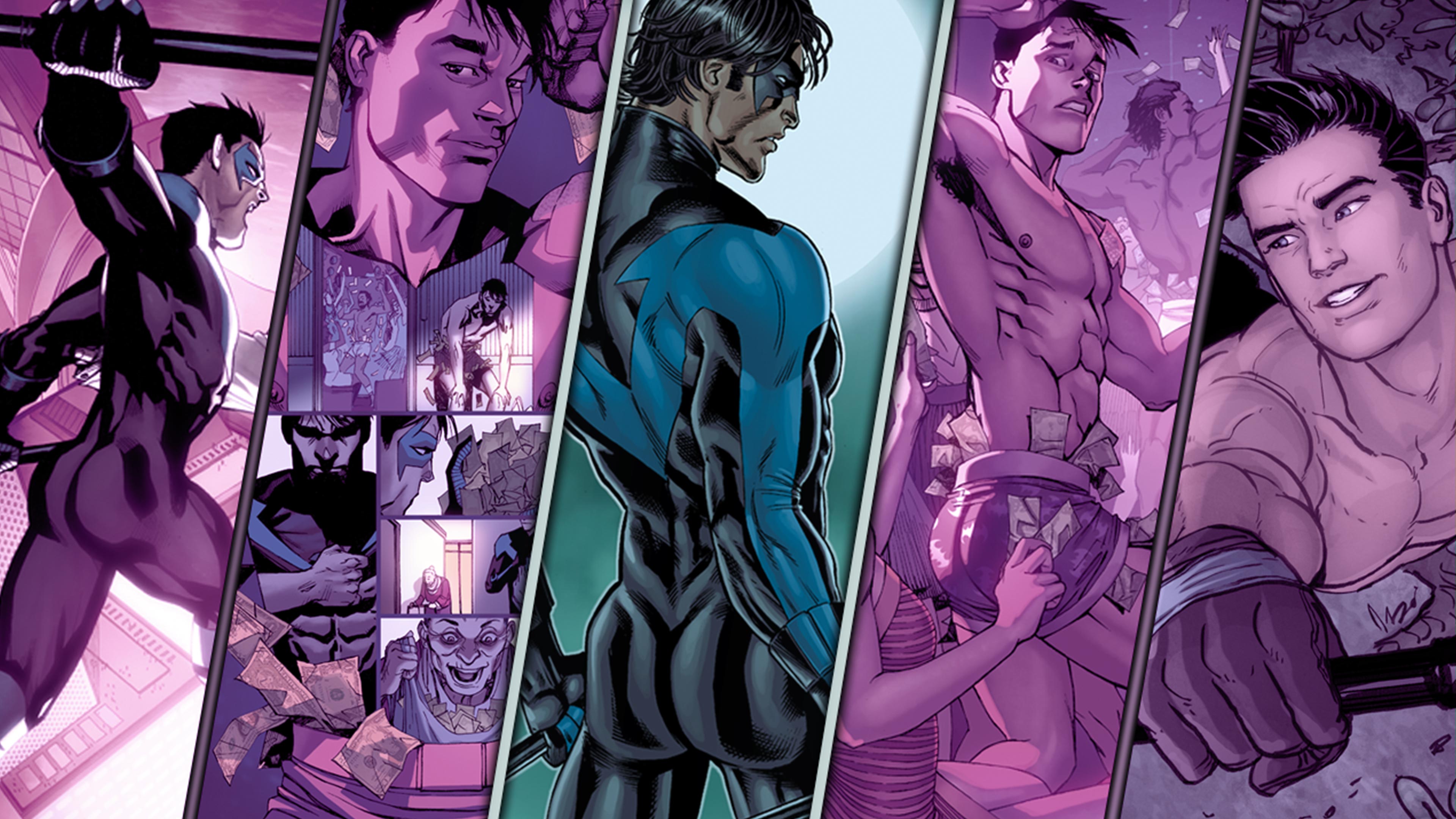 How Did Nightwing Get So Sexy? A DC Universe Investigation

We may be leading up to Batman Day, but somehow it’s the first Boy Wonder who’s taken the spotlight this week. Beyond all expectations, “Nightwing” has been trending on social media worldwide. How could this be? Has the long-suffering “Ric” Grayson come to his senses? Was there some surprise movie or casting announcement? Are he and Starfire finally together again?

Nope. This is all about Nightwing’s butt. 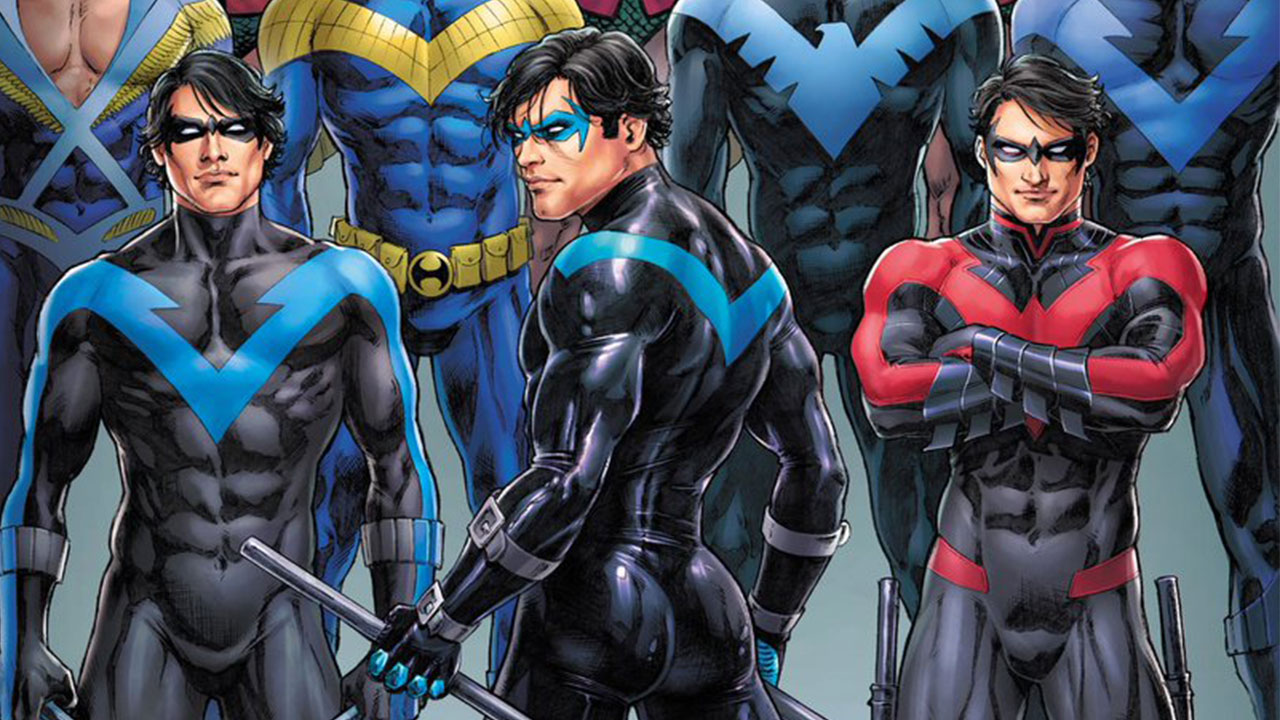 Earlier this week, ‘Wonder Woman: Year One’ artist Nicola Scott revealed a companion piece she had drawn for the convention circuit to her landmark covers for ‘Detective Comics’ #1000 and ‘Action Comics’ #1000, each featuring a lineup of their respective leads’ most notable costumes throughout the decades. This new piece features Nightwing in the same milieu, but with one notable exception: the modern Nightwing, front and center, is turned around, grinning puckishly as he showcases his most famous asset. 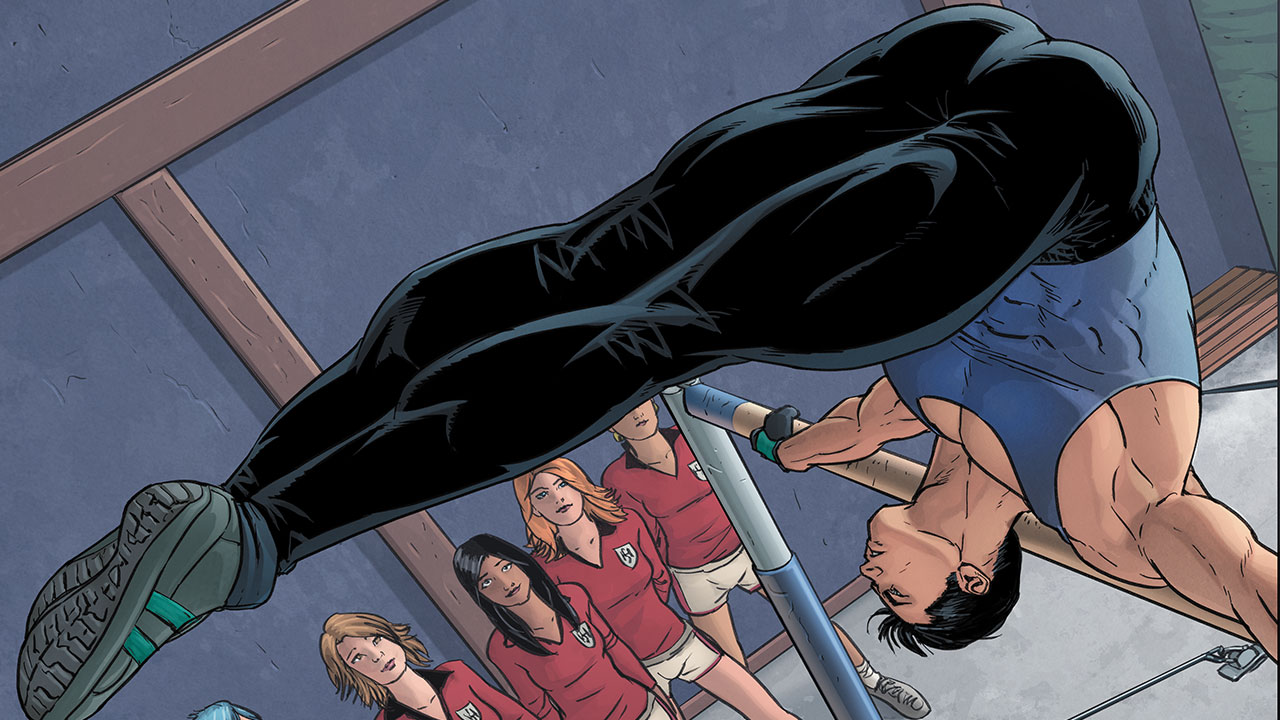 But, this is only the latest of many incidents in a memetic cultural agreement that out of everyone to bare the spandex tights, Nightwing is the sexiest man to do it. Nightwing’s attractiveness is almost central to the film ‘Batman & Harley Quinn’ and its tie-ins. In the super spy ‘Grayson’ series, the girls from St. Hadrian’s are so enamored with their gym teacher’s behind that they give each of the cheeks their own names. (Righty is “Jim,” Lefty is “Juan.”) Even Midnighter admits that Dick may do whatever he wants to hide his face, but “[he’d] know that ass anywhere.” 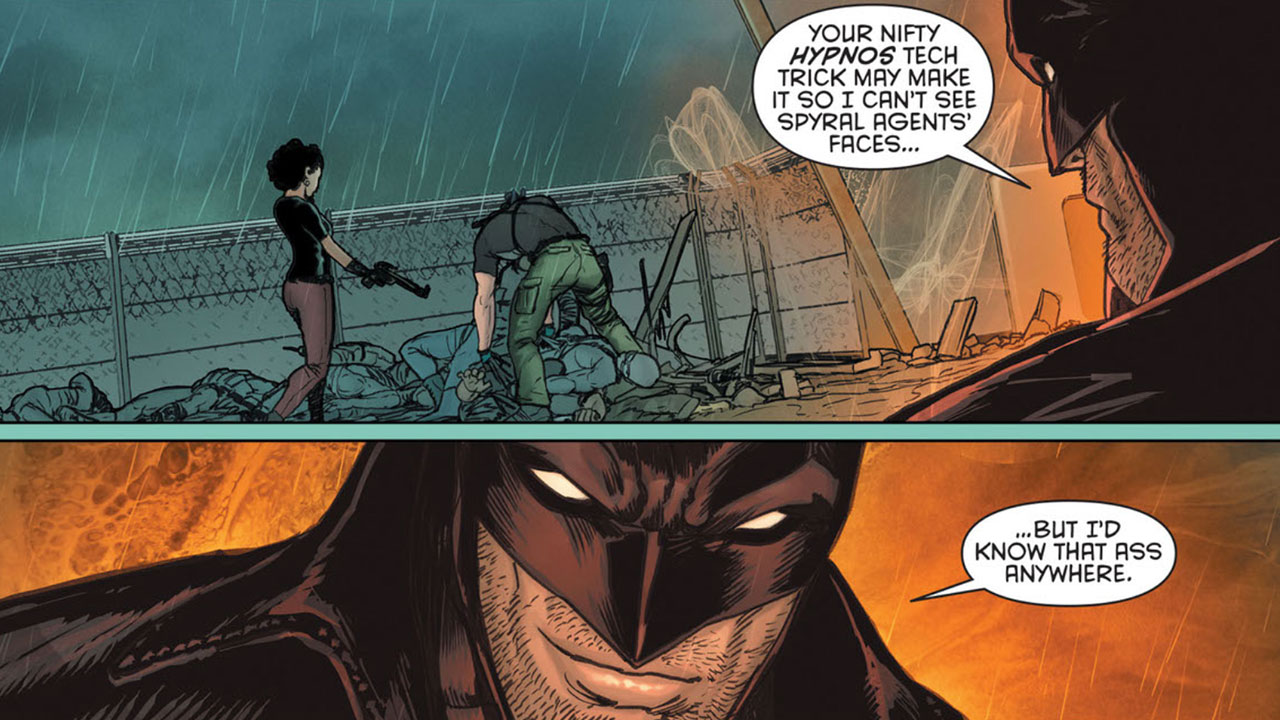 As it so happens, my editor submitted a query about this very phenomenon for my regular column last week, “Ask… The Question.” It seems like some time in the past several years, Nightwing has grown from stately leader of the Titans into his very own sex symbol. How could this have possibly happened? When exactly did Nightwing’s butt become more famous than his face? We decided to spin the answer into its own special report, and here I record my findings for posterior. Er. Posterity. 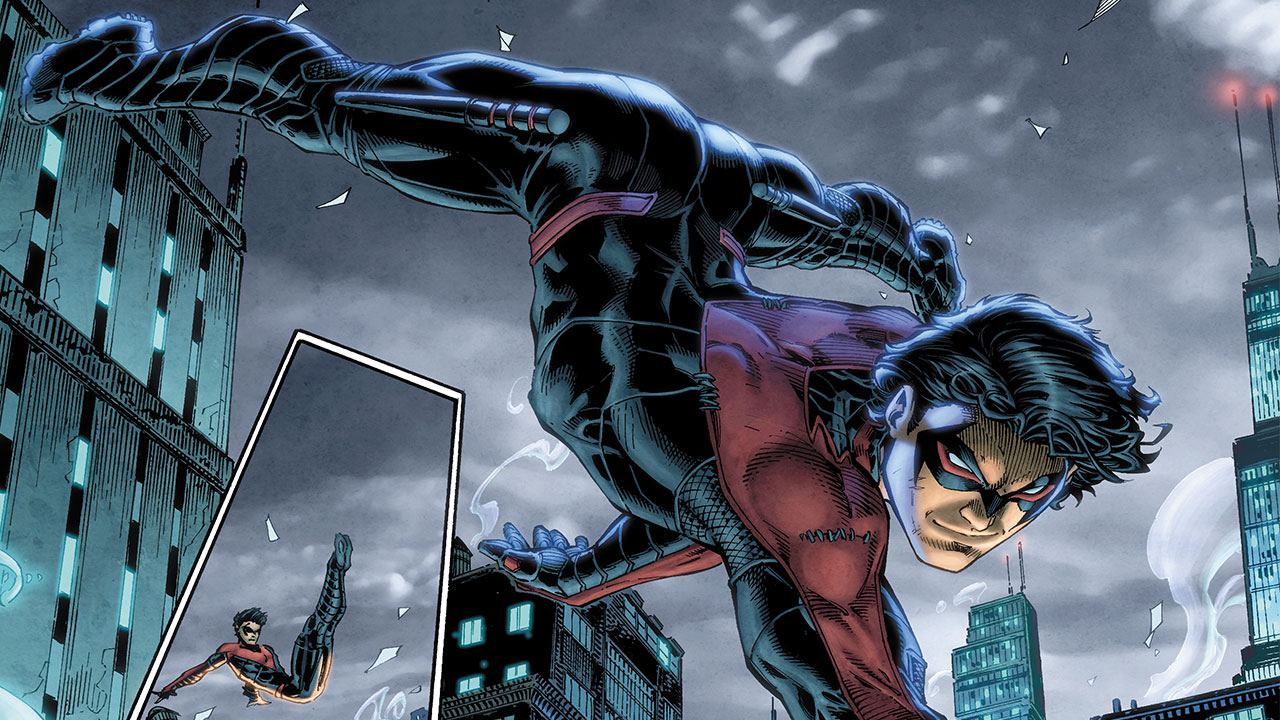 Believe it or not, the origins of this crusader’s curvaceous caboose can be traced back to Nicola Scott herself- the very artist who got Nightwing trending this week- and her co-conspirator, ‘Birds of Prey’ writer emeritus and the extremely online Gail Simone. Consider this the story of ‘Nightwing: Rear One.’ 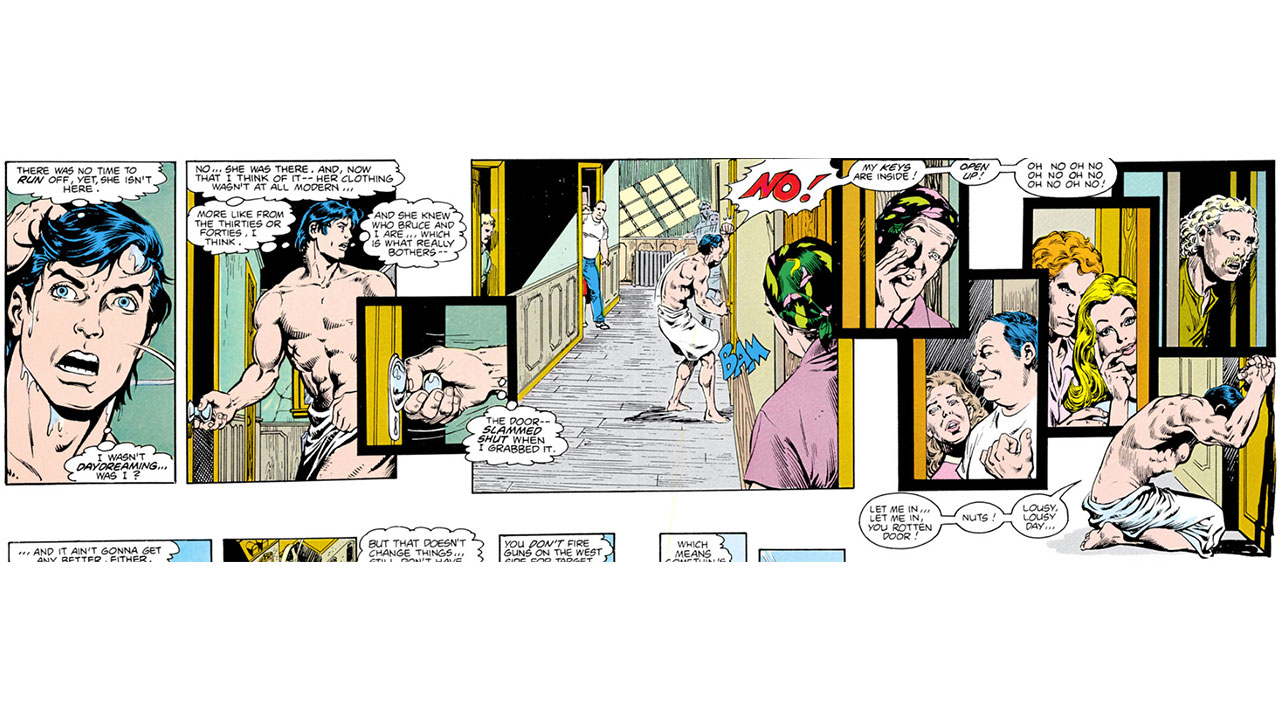 First, let’s get one thing straight: as a young, handsome, physically fit superhero in form-fitting spandex, Nightwing has always been attractive. He certainly had no problems in the ladies’ department throughout ‘The New Teen Titans’ and his own solo ‘Nightwing’ series — at least, none outside those created by his complex personal life and work balance. Indeed, writer Marv Wolfman and artist George Pérez’s ‘Teen Titans’ run provided plenty of Nightwing eye candy, often depicting him in various states of undress. Though, as equal opportunity cheesecake chefs, Wolfman and Pérez served up plenty of scenes depicting other members of the team that way as well. 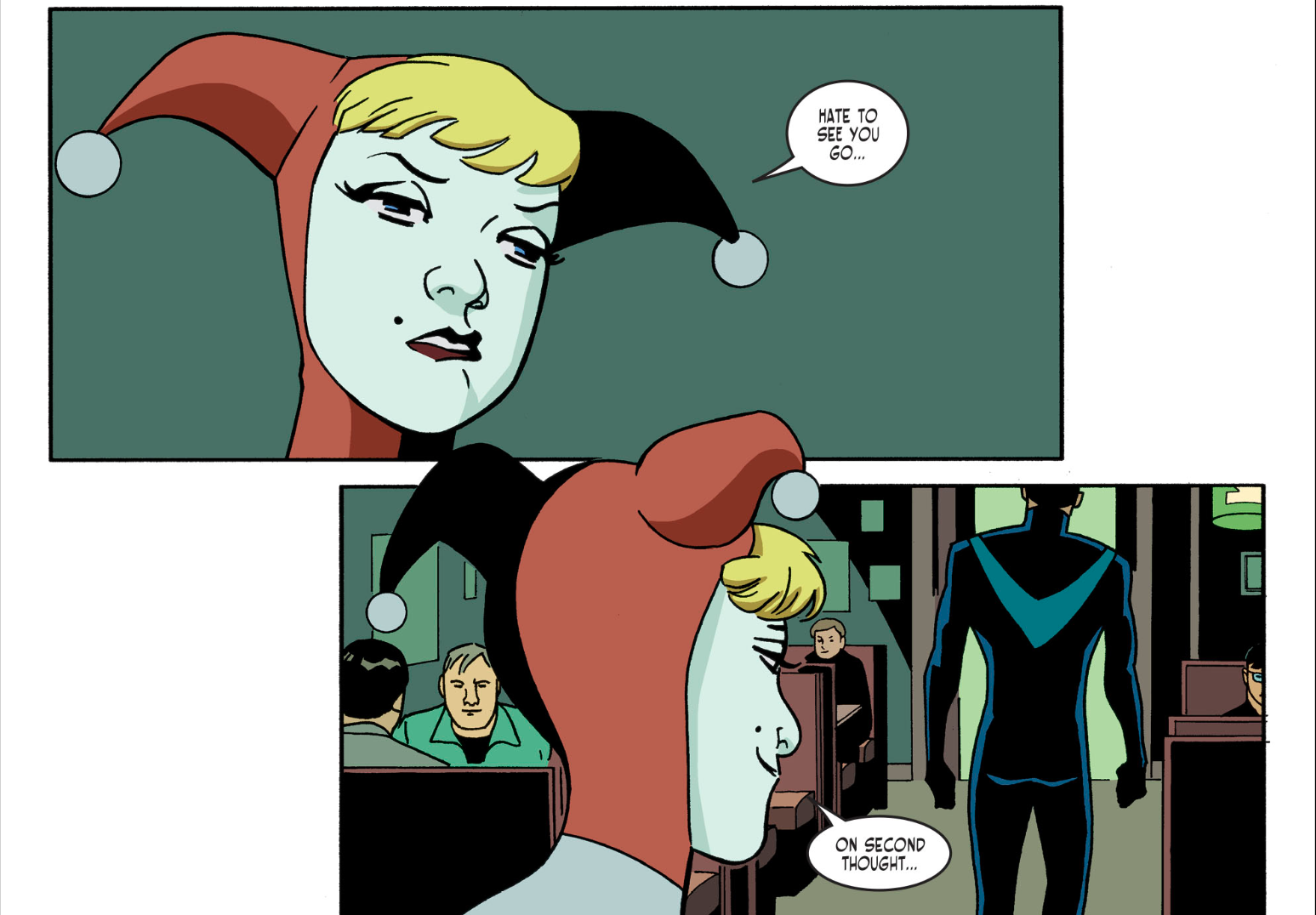 All the same, that base level of attractiveness can be applied to basically any hero. So what makes the way Nightwing fills out his costume sexier than Wally West, or Kyle Rayner, or even Superman? (Well, for one, the cape blocks the view, but that’s backsides the point. BESIDES. Sorry.)

For the true answer, we must look back to what many consider to be writer Gail Simone’s magnum opus, the miscreant Super Villains-for-hire title ‘Secret Six.’ It was a book of intrigue, mystery, action, comedy, and as much raunchiness as the waning days of the Comics Code Authority would allow. Famously, Gail Simone once asked Nicola Scott to draw the greatest butt of all time on Secret Six member and bisexual banshee Jeannette -- and to hear them tell it, she did so, only for the panel to be tragically censored by word balloon placement. 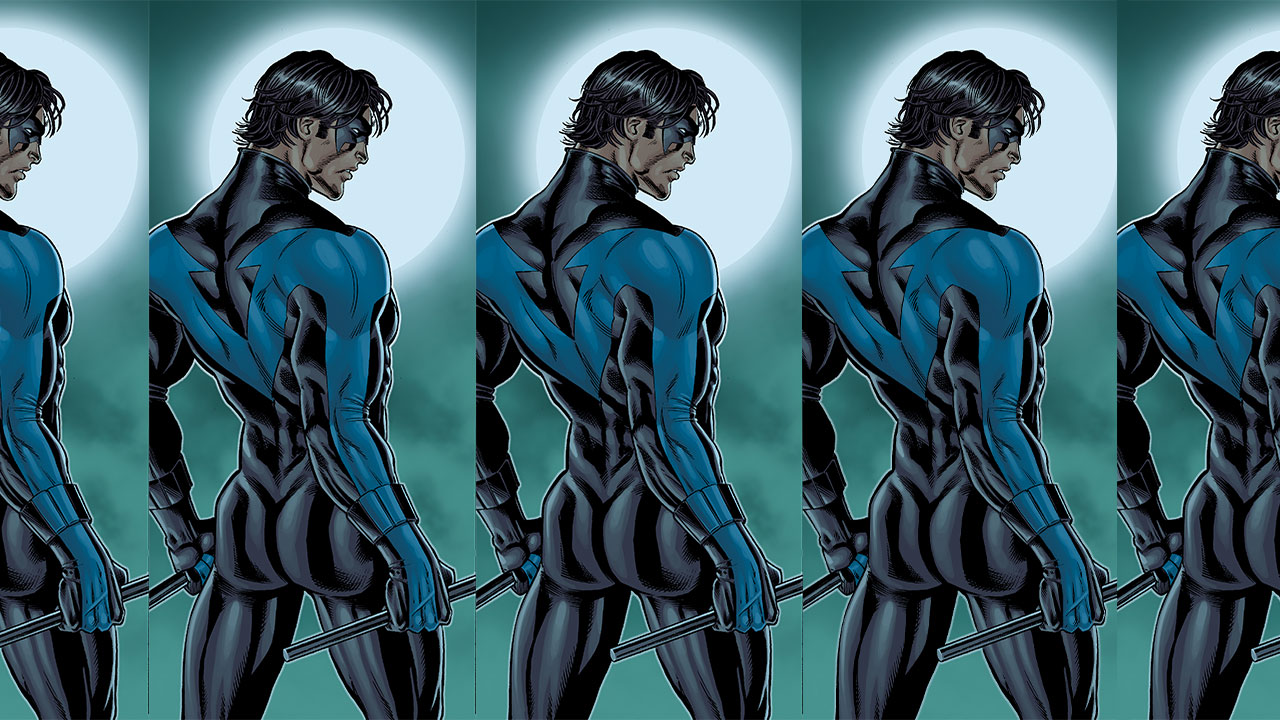 In 2009’s ‘Secret Six’ #9, we find Nightwing at odds with our male leads during what many consider to be the best tie-in to the ‘Battle for the Cowl’ event, as Secret Sixers Bane, Catman, and Ragdoll try on heroism for a change. As a sign of contempt, Nightwing turns his back to the erstwhile anti-heroes. And just as a treat for her writer, in a move that the script didn’t even call for, Nicola Scott in a wild flash of inspiration consciously decided to draw the meatiest haunches on Nightwing that you’ve ever laid eyes on. 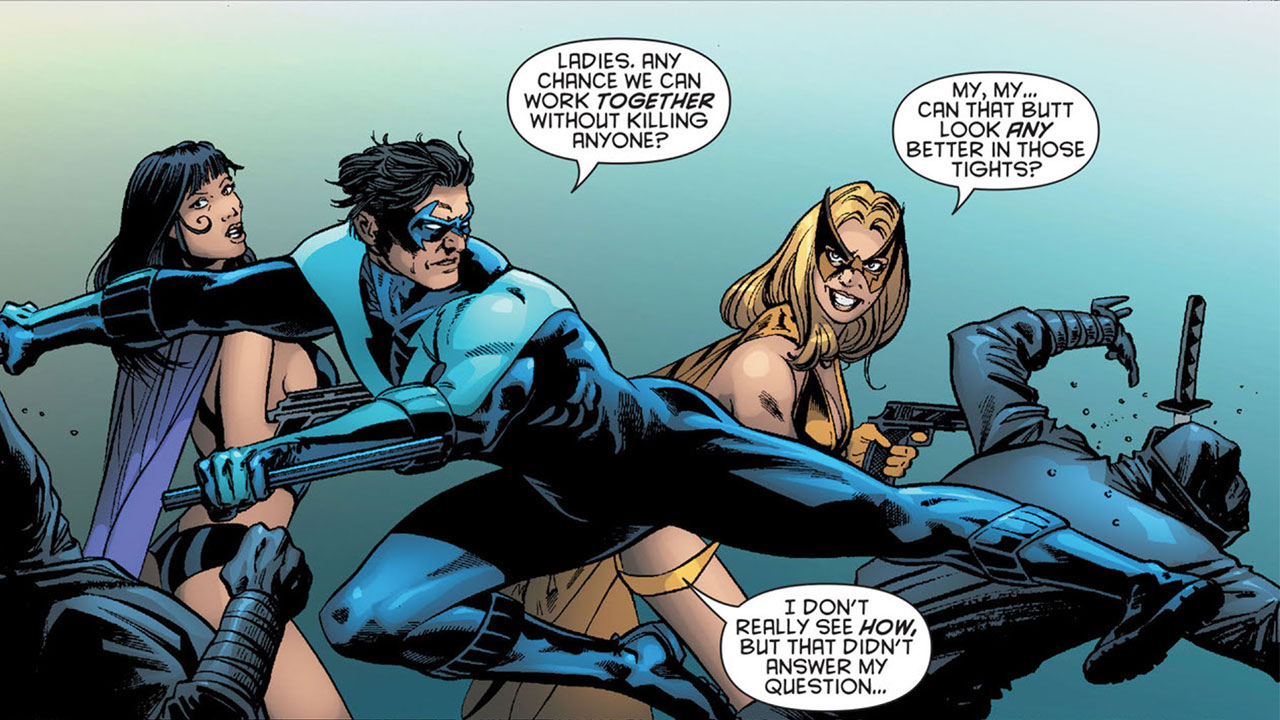 Gail Simone, to her credit, took that ball and ran with it. For her remaining tenure in the Batman universe, she would continue to pepper references to Nightwing’s butt throughout her prolific work. She sang its praises on social media. And, in time, other writers and artists -- and the fan community itself -- caught on. Today, search for any list of the “Hottest Male Super Heroes” and you’ll almost inevitably find Nightwing at the very top… on account of his very bottom. To hear it from the source, holler at Gail Simone about it on social media. Or you can check out this very informative Twitter thread. 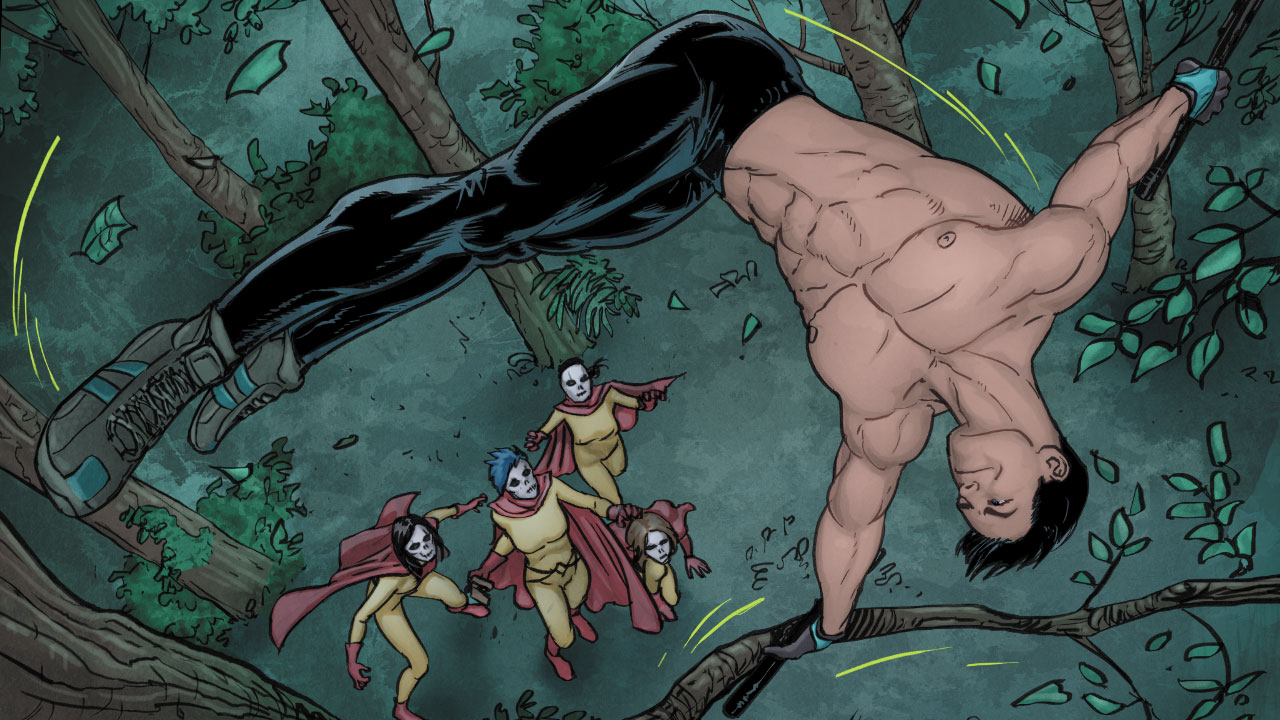 Will there ever be a sexier male superhero than Nightwing? Perhaps you, dear reader, have a preference of your own. But for now, the one-time Boy Wonder sits rather comfortably upon his padded throne, where no pretender would dare have the cheek to unseat him.

Do you think Nightwing is the sexiest male superhero? Let us know in our Community?