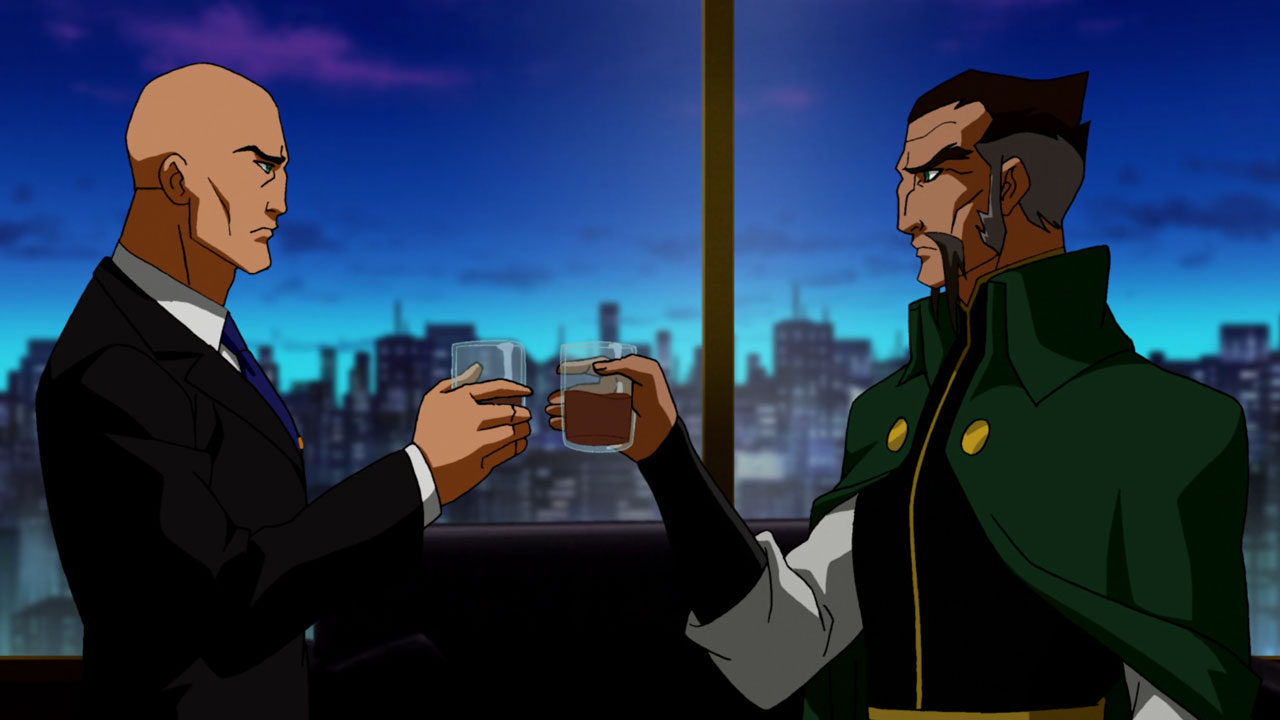 Hello. I’m Alex Jaffe, better known in our Community as HubCityQuestion. My personal mission: to take on any question you have about the DC Universe -- no matter how strange, granular, or obscure -- and present you with an answer. As a faithful steward of the truth, I offer my time in this weekly column to address these inquiries. If you’d like to submit one of your own, you can stop by my office at any time in our Community to state your case, each of which I will in time address to the best of my ability. Onward, to discovery!

“On multiple DC media platforms over the years, two pronunciations of Ra’s al Ghul have been used, either “Raysh” or “Rahs”. Which pronunciation is correct? Also, is it Luth-“ore” or Luth-“er”?” -whthompson78.52124

The “Ra’s al Ghul” issue is a tricky one, because it depends on who you want to believe: the creator of the character himself, or common-sense Arabic? To his credit, in most of the earliest appearances of Ra’s al Ghul as written by his co-creator with artist Neal Adams, Denny O’Neil, Denny himself attempted to spell out the proper pronunciation in text, by adding macrons over the "a" and "u" (as in the above image) to indicate a “long” vowel sound. So, in this case, the “a” in “Ra’s” would be pronounced as in the word “snake.”

However, this conflicts with other information we’re given in Ra’s al Ghul’s background. Time and again, we’re told that “Ra’s al Ghul” literally translates in Arabic to “Head of the Demon.” But ask any Arabic speaker, and they’ll tell you that the word for head is pronounced “Ras,” with an “a” as in “armor.” And yet, Denny often insisted into his final years that he had consulted with an Arabic linguistic professor who told him that the long-a pronunciation was correct.

Here’s what I personally believe happened: the word “Rayis,” with a long “a,” does have another meaning, as in “leader” or “chief,” and that was the word Denny got from his Arabic professor contact. But Ra’s al Ghul is not called the “Leader of the Demon;” he’s the “Head of the Demon.” His insignia as drawn by Neal Adams in those early issues is literally a demon’s head. A very important sequence in BIRTH OF THE DEMON, Denny O’Neil’s own Ra’s al Ghul origin story with Norm Breyfogle, includes an important sequence where he earns his name by removing the head of a demon statue. It’s clear that the “head” in his name is supposed to be literal, not a synonym for “chief.”

The question of how to pronounce “Luthor” is a little more abstract, because it isn’t an actual word, or even a real surname. The first thing I tried to do to secure an answer was go right to the source. I watched every readily available clip I could find of interviews with Luthor creators Jerry Siegel and Joe Shuster to see how they pronounced it, but that content rarely gets further than how Superman came to be in ACTION COMICS #1. So instead, we have to turn to adaptations where the name is spoken aloud. The turning point here, like so much of Superman’s world as we see it today, is Superman: The Movie. Prior to Gene Hackman’s slurring of “Lu-Thor” as “Luther,” every media appearance by Superman’s arch-enemy, from the 1950 film serial to the earliest cartoons, had his name as “Lu-Thor.” Even in Superman: The Movie, you can hear the characters themselves divided on the issue. Pronunciation changes from person to person. Years later, on TV’s Smallville, it was often the case that series regulars would go with Hackman’s “Luther,” while guest actors or smaller roles would pronounce it “Lu-Thor.” Because the interchangeability of those pronunciations is as old as the alternate pronunciation itself, I’d say that prior to 1978, the Lex Luthor of the Golden and Silver Ages is strictly “Lu-Thor,” while the Lex of the Bronze Age and onward can be safely regarded as either. 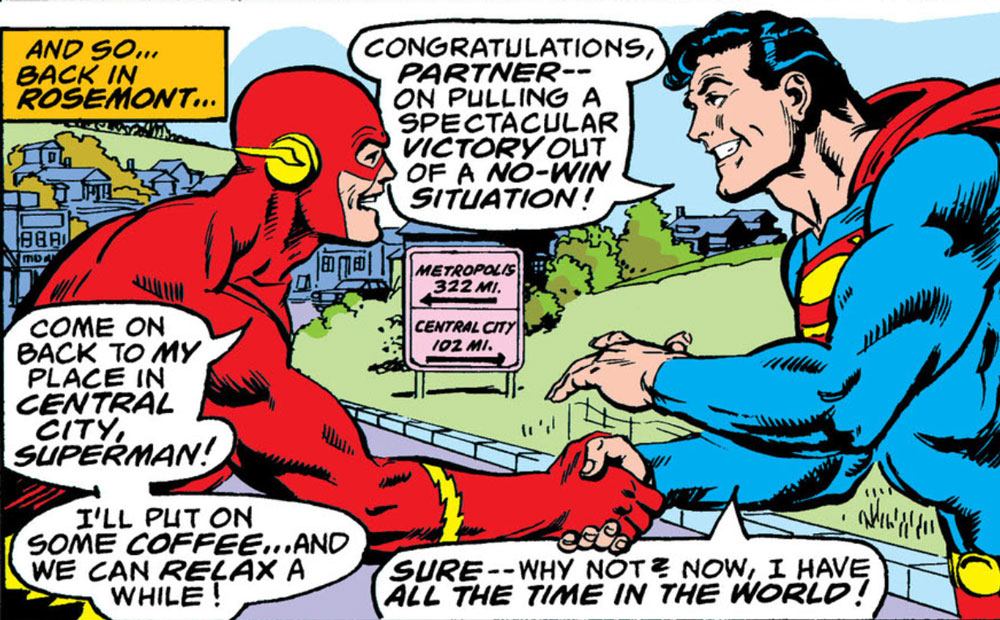 “In most instances that I’ve heard when talking about Superman and The Flash being together on a mission (not Justice League related) the focus seems to be on their fabled race to the finish line.

What stories are there out there where their mission (apart from the League again) is not a contest of speed, but rather serving out justice together or solving some criminal mystery?” -ajm08g

Quite a handful, actually! While Superman and The Flash’s most memorable team-ups tend to involve some kind of race, these two staple heroes have often found occasion to fight crime side by side. Here’s a timeline I made just for you of Flash and Superman adventures, no Justice League context required. Links provided where issues have been digitized as of this publication.

ALL (STAR SQUADRON) HANDS ON DECK 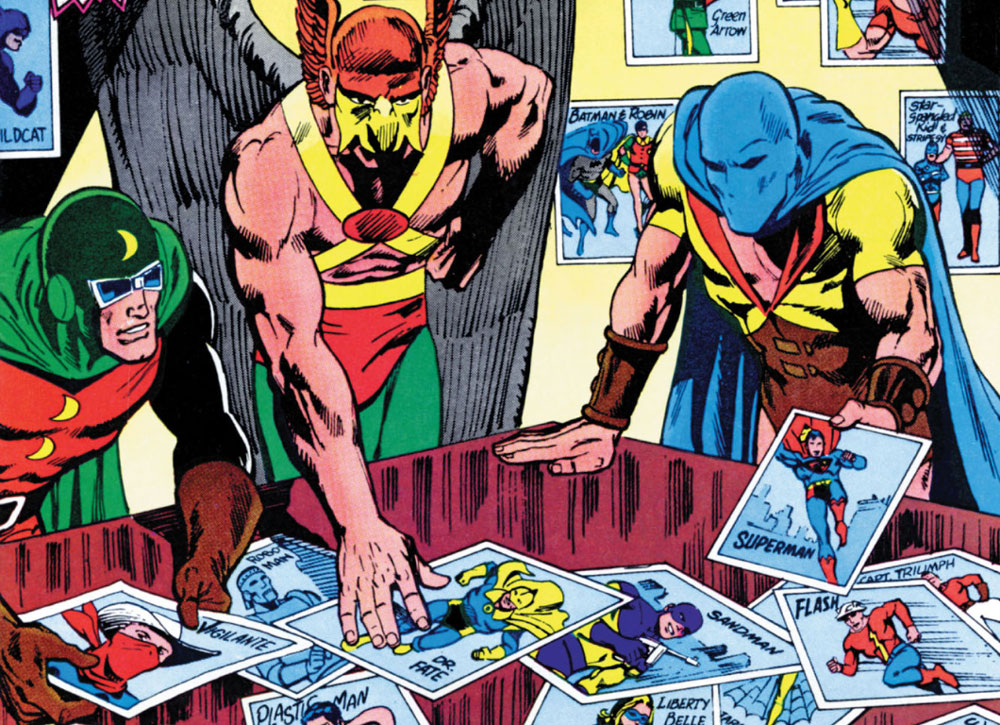 “You may have guessed by now I’m a bit of a continuity nut. One of my favorite series was the original All-Star Squadron but there was some confusion over the official membership. Recently Wikipedia and several other sites agree on the official post crisis membership. It comes out to exactly 90. This list includes Little Miss Redhead who I know originally came out post war. It does not include Merry, the Gimmick Girl and I know James Robinson retconned her in Starman in a Times Past story that was one of the few post war adventures of the Squad.

Also, Speed Saunders is listed but Hop Harrigan is not and I know he appeared in Young All-Stars #8. Is Wikipedia supposed to be the ‘official roster’ of the Squadron now?” -a2.ton.50172

As my editor always says, don’t rely on Wikipedia for anything. This entirely unofficial list you’ve discovered shouldn’t be considered any authoritative text, but merely an inventory of heroes who appeared in the same-titled book. I’ll tell you right now, though, that any accounting of an “official” roster of the All-Star Squadron is an exercise in futility. It’s simply not that kind of team. The Squadron, ultimately, was not some limited organization with roll-call, but a nationwide initiative to militarize ALL of the nation’s superheroes to lend a hand when America needed them most in World War II. So if there was an active superhero at all in Roy Thomas’s wartime Earth-2, they were de facto considered to be a member of the All-Star Squadron. (So, for instance, every member of the Justice Society of America could be considered a member of both the JSA and  the Squadron. Same goes for the Seven Soldiers of Victory, Uncle Sam’s Freedom Fighters, and so on.) This is mirrored today in the functionality of Scott Snyder’s modern Justice League, as inspired by Dwayne McDuffie’s take on the team in Justice League Unlimited--that while there is, perhaps, a core group who defines it, EVERY active superhero can be considered a part of the roster.

Well, it seems as if my work here is done… at least for this week. Join me next time for a fresh round of mysteries uncovered, all courtesy of those who dare to ASK... THE QUESTION.