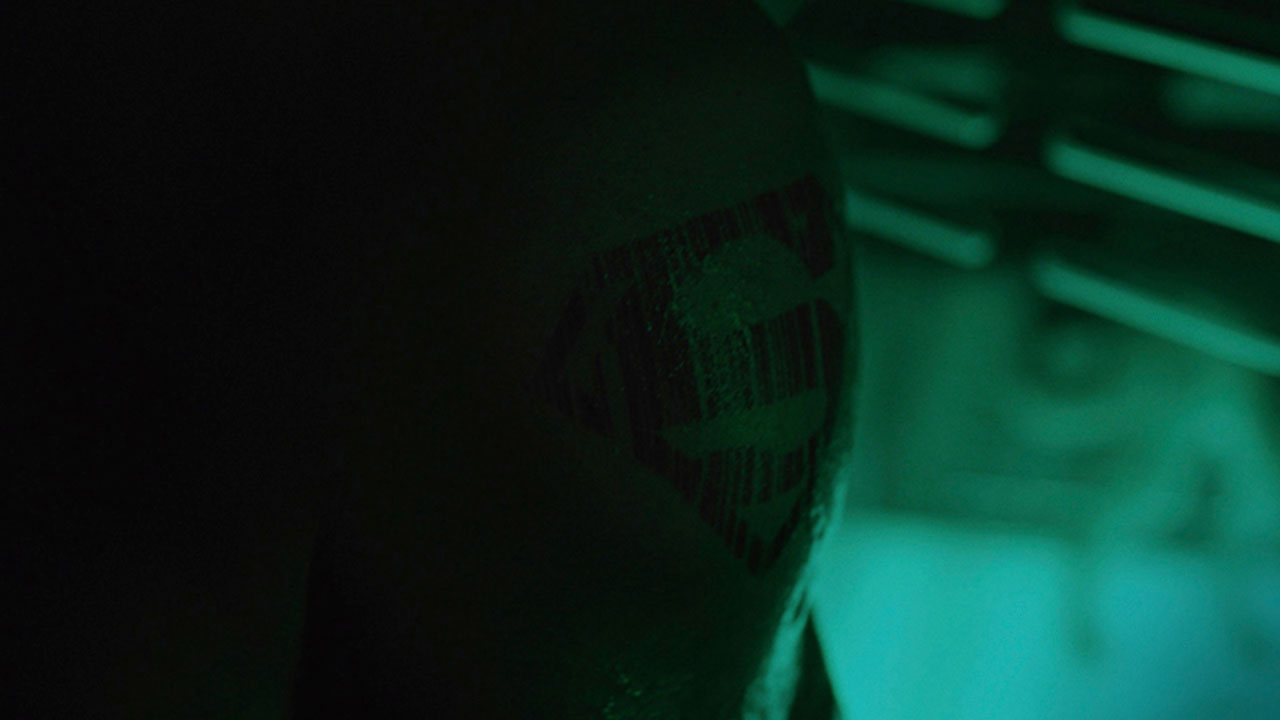 All The Easter Eggs in TITANS Episode 11 “Dick Grayson”, Including THAT Post-Credits Scene!

Holy cliffhanger! Did you all catch the season finale of Titans? (Watch “Dick Grayson” here.) The show's season concluded with an epic Robin vs. Batman battle, a ton of comic-related Easter eggs, and a stinger that has everyone begging for season 2 to get here faster! So let’s get started… 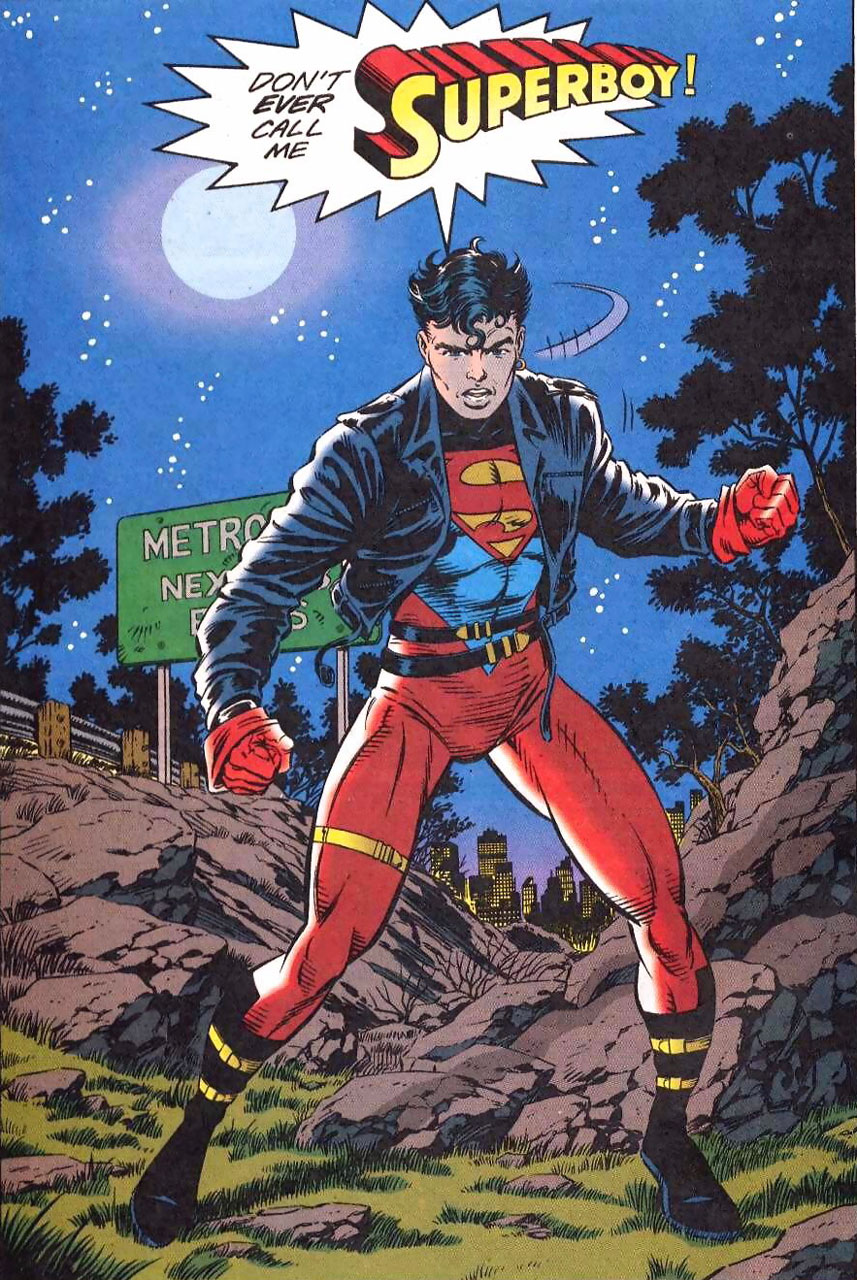 Last things first... We’re sure many of you are beyond excited about the mysterious Superman-tattooed stranger in the episode's post-credits scene, while others may be wondering who he is. This shadowy figure is Superboy, a teenage Kryptonian clone who became an important member of the Teen Titans. He first appeared in Adventures of Superman #500 (written by Karl Kesel and penciled by Tom Grummett), during the classic “Death and Return of Superman” storyline (watch The Death of Superman here). After Superman fell during his battle with Doomsday, Cadmus Labs (more on them shortly) attempted to create their own clone of the Man of Steel, and Superboy was the result. He had most of Superman’s powers, but none of his maturity, making it hard to keep the Teen of Steel in line. Initially, he had no name aside from “Superboy”, but Superman rectified that by giving him the name Kon-El in Superboy #59 (written by Karl Kesel and penciled by Dusty Abell). In 2003's Teen Titans #1 (written by Geoff Johns and penciled by Mike McKone, read Teen Titans #1 here) we saw him use the secret identity “Conner Kent” for the first time. In that same story, he officially joined the Teen Titans for the first time and learned that he was partially cloned from Lex Luthor. With Superboy coming to Titans in season 2, you can bet things are about to get real interesting! 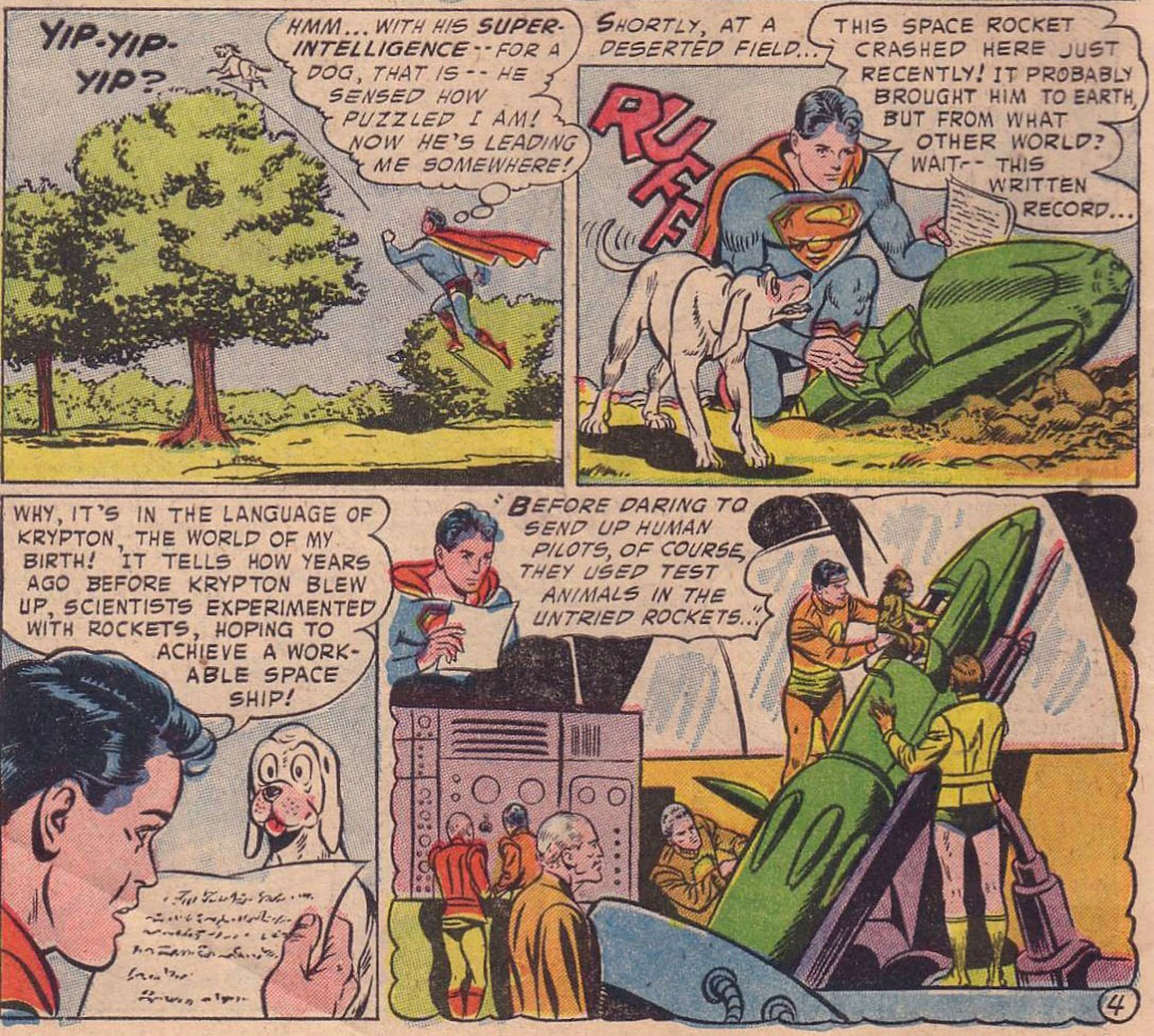 The final shot of Titans' season 1 stinger features Superboy freeing some sort of Kryptonian canine. It looks like this is the Titans version of Krypto, the super-powered dog first seen in Adventure Comics #210 (written by Otto Binder and penciled by Curt Swan). The original version of Krypto was a dog who survived Krypton’s explosion by escaping in a test rocket sent just like Kal-El did. He was a frequent partner to the teenaged Clark Kent when he fought crime as Superboy. There have been other incarnations of Krypto over the years; one was a normal dog, while another came from an alternate dimension. In any case, he’s always been any Superman's -- or Superboy's -- best friend.

Sharp-eyed viewers may have noticed the word "Cadmus" written on the wall of the laboratory Superboy tore up. The history of Project Cadmus began when Jimmy Olsen first met the Newsboy Legion, which was working for Project DNA in Superman’s Pal Jimmy Olsen #133 (story and art by Jack Kirby, read Superman’s Pal Jimmy Olsen #133 here). After the reality-altering events of 1985-1986's Crisis on Infinite Earths, Project DNA was renamed Cadmus in Superman Annual #2 (written by Roger Stern and penciled by Ron Frenz). While the scientists of Cadmus occasionally served as support for the citizens of Metropolis, some of their directors have been shadier characters with nefarious purposes. Will this version of Cadmus be friend or foe?

Another classic DC Universe city joined the Titansverse this week. Superman’s base of operations was first referred to as Metropolis in Action Comics #16 (written by Jerry Siegel and penciled by Joe Schuster). In addition to the Man of Steel, Metropolis is home to Lois Lane, Jimmy Olsen, and the Daily Planet, and is the setting for many classic DC stories.

In Dick’s seemingly perfect life with Dawn, their son is named Johnny, a tribute to Dick’s late father John Grayson.

This week, Jason Todd had the unfortunate task of informing Dick that the Joker had killed Jim Gordon. Commissioner Gordon is one of Batman’s oldest allies, first appearing in the Dark Knight’s inaugural story in Detective Comics #27 (written by Bill Finger and penciled by Bob Kane, read Detective Comics #27 here). We learned his first name was Jim in World’s Finest #53 (written by David Vern Reed and penciled by Dick Sprang). Joker’s torture of Gordon, as described by Jason, is reminiscent of the classic 1988 graphic novel The Killing Joke (written by Alan Moore and penciled by Brian Bolland), in which the Clown Prince of Crime tortures Gordon with the purpose of driving him mad. In the comic, Batman was able to save his friend. Alas, he wasn't as fortunate in this episode's story. 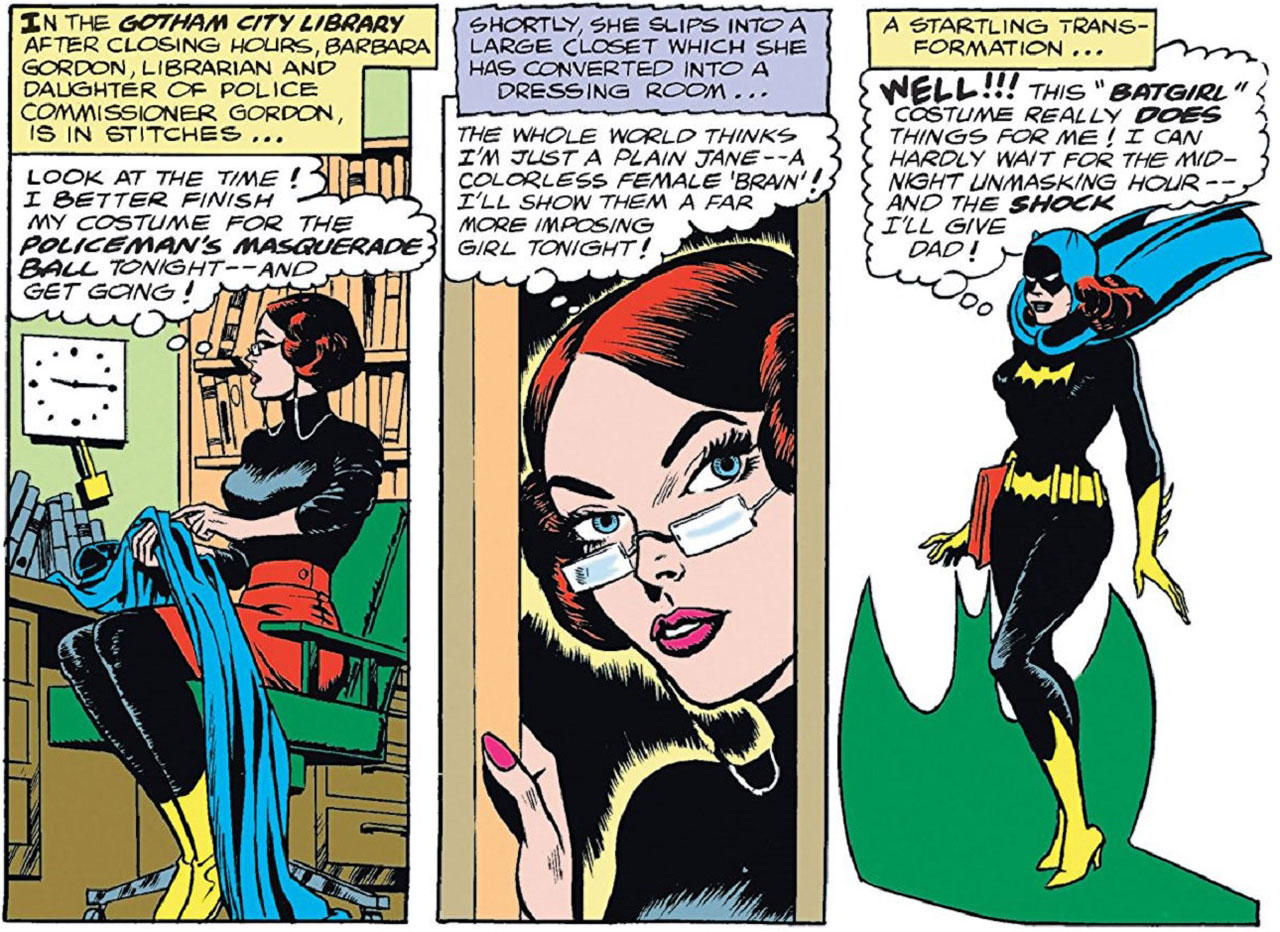 In a rundown of Batman’s allies, the name Barbara was thrown around a few times. Barbara Gordon, first seen in Detective Comics #359 (written by Gardner Fox and penciled by Carmine Infantino), is Commissioner Gordon’s daughter who also operates as the vigilante Batgirl. She first became Batgirl to play a prank on her father at a costume party. But after saving Bruce Wayne’s life, she decided she wanted to continue down the path of crimefighting. After a run in with the Joker (in the aforementioned The Killing Joke story), Barbara Gordon was paralyzed from the waist down. Using her computer skills, Barbara became an information broker for the superhero community in Suicide Squad #23 (written by John Ostrander and Kim Yale, penciled by Luke McDonnell, read Suicide Squad #23 here). Calling herself Oracle, her intel hub helped the Justice League, Teen Titans, and many other heroes save the world countless times. Eventually, a new surgical procedure allowed Barbara Gordon to regain her mobility, and she donned the Batgirl identity again in 2011's Batgirl #1 (written by Gail Simone and penciled by Ardian Syaf).

Barbara and Dick Grayson have a long romantic history, and the two were almost married once. To this day, fandom still debates if Dick’s true love is Barbara Gordon or Kory Anders. 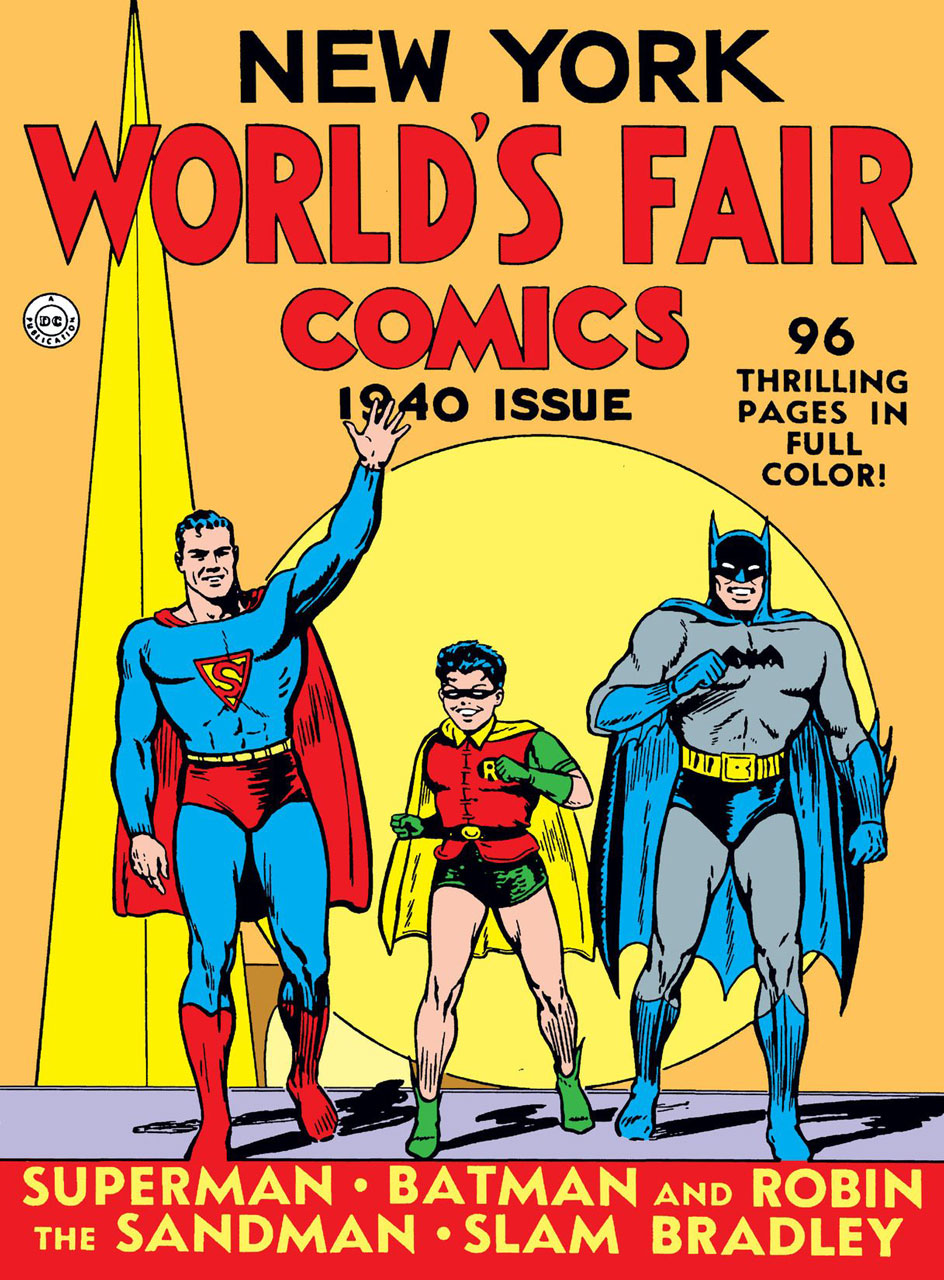 After weeks of hints (mostly in the form of t-shirts), this episode was our first confirmation that Superman exists in this universe! Many of you know Superman as DC Comics premier superhero, who debuted in Action Comics #1 (written by Jerry Siegel and penciled by Joe Schuster read Action Comics #1 here), but his relationship with Batman has an offbeat history. Although the duo first appeared on a cover together with 1940’s New York World’s Fair Comics #2, they still did not officially meet until a 1945 broadcast of the Superman radio show. And they didn’t officially meet in comic books until 1952’s Superman #76 (written by Edmond Hamilton and penciled by Curt Swan) -- 12 years after they first shared a cover! From what Dick learns in this episode, it sounds like their relationship has fallen on hard times. 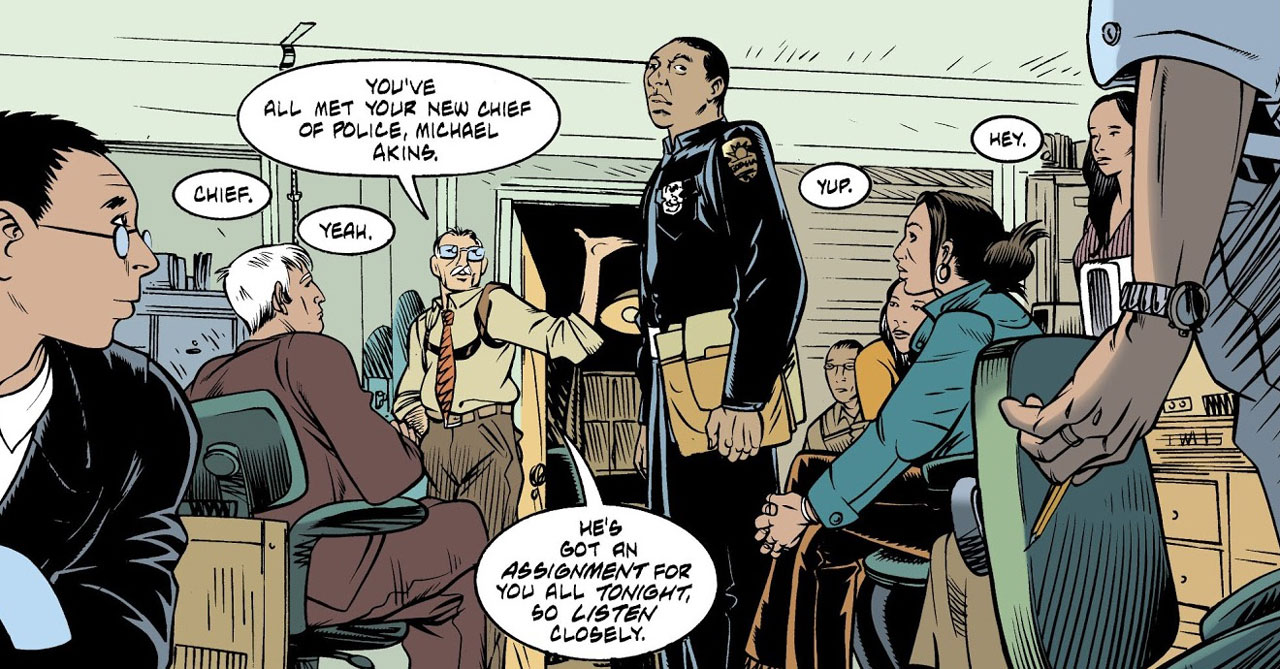 After the murder of Commissioner Gordon, his post is filled by a man the show identifies as Stable. Unfortunately for Batman, Stable is not as friendly with Gotham’s vigilantes as Gordon was. While they have different names, Stable is similar in appearance and attitude to Michael Akins, who first appeared in Batman: Turning Points #5 (written by Greg Rucka and penciled by Paul Pope). When Jim Gordon chose to retire after the events of the 2001 Batman storyline “Officer Down”, Michael Akins was picked as his replacement. Like Stable, Akins did not wish to continue Gordon’s cozy relationship with Gotham’s vigilantes. Akins took down the Bat-Signal and ordered the arrest of Batman and his allies. He was eventually removed for corruption, and Jim Gordon was reinstated as Commissioner. Akins currently serves as Gotham’s mayor. 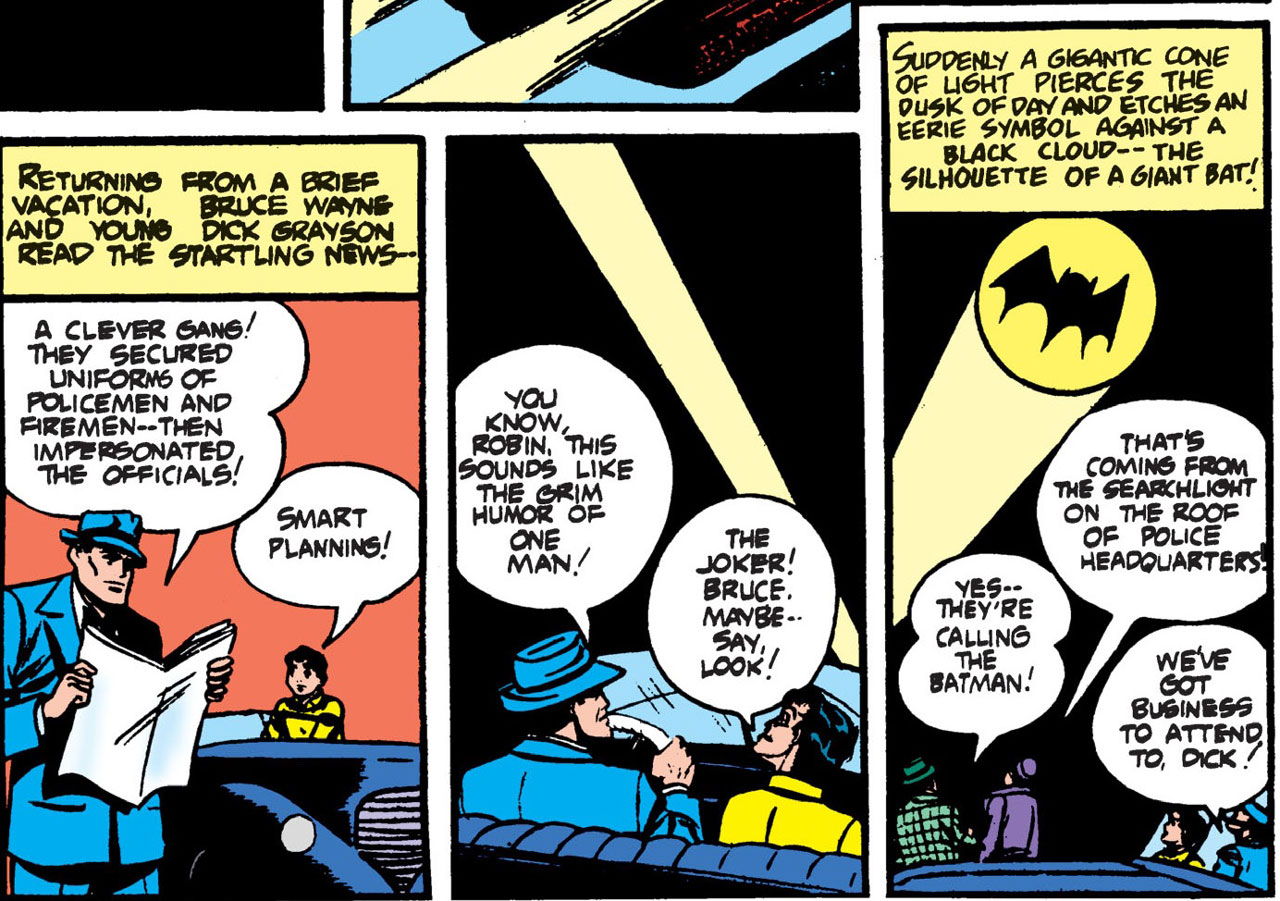 One of Commissioner Stable’s first acts was to dismantle the Bat-Signal. It’s a darn shame too, because it’s been standing ever since Detective Comics #60 (written by Jack Schiff and penciled by Bob Kane). Since the police department doesn’t have Batman’s cell phone number, the Bat-Signal has served as the GCPD’s means of summoning the Dark Knight ever since the Golden Age of Comics. The signal also acts as a constant reminder to Gotham’s citizens that Batman is watching, and they’d better be on their best behavior. 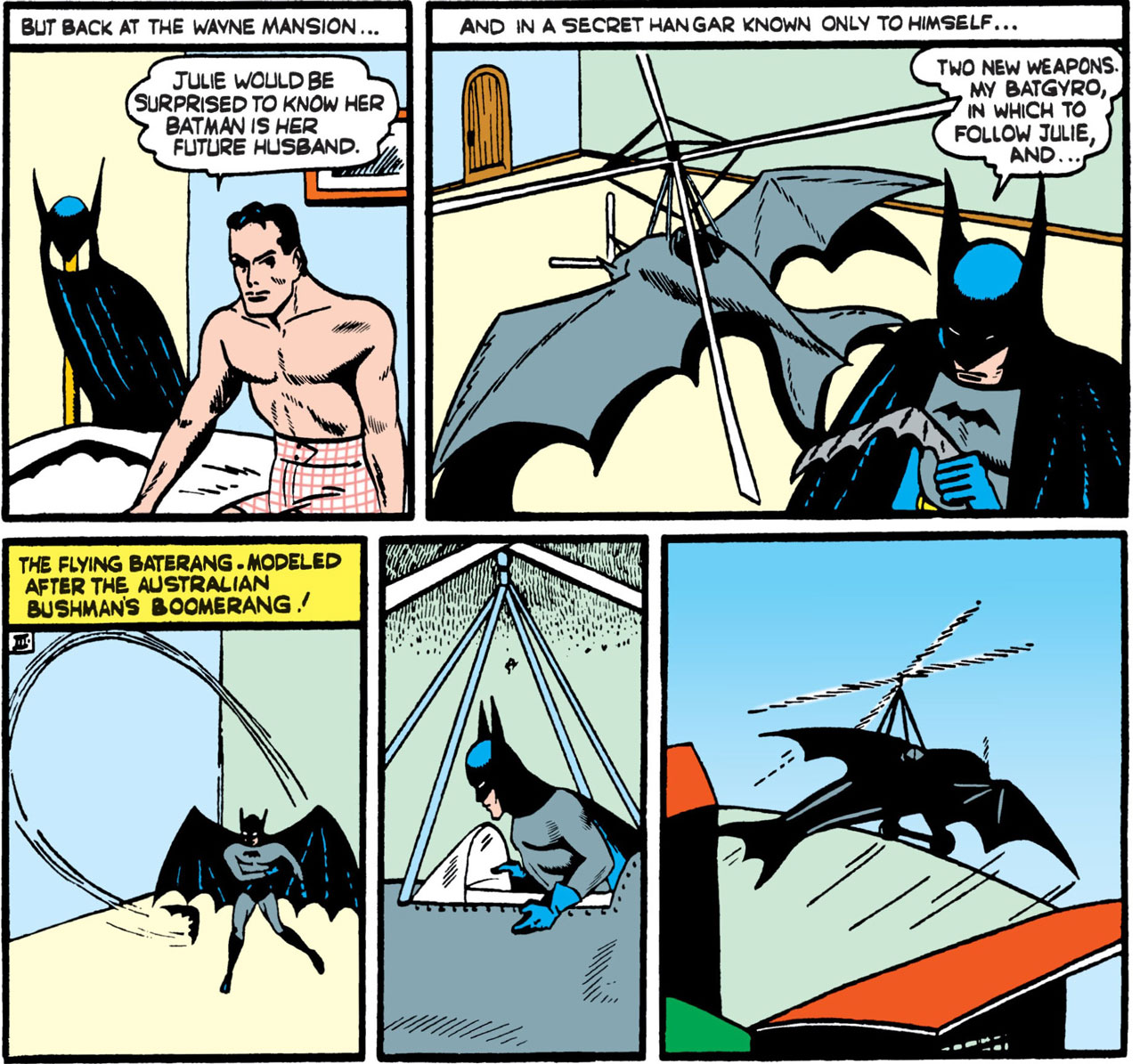 During his battle with the GCPD, we see Batman throw one of his famed Batarangs. We'd previously seen Dick Grayson’s Birdarang variant in “Donna Troy”. Batman’s signature weapon was first seen in Detective Comics #31 (written by Gardner Fox, penciled by Bob Kane and Sheldon Moldoff, read Detective Comics #31 here). It was originally described as “modeled after the Australian bushman’s boomerang”. It has remained a constant presence in Batman lore, and a frequent source of ire to his rogues.

While trying to talk some sense into his former partner, Dick faces a grandfather clock in Wayne Manor. That grandfather clock is one of the most notable entrances to the Batcave. This secret passageway was first used in the 1943 Batman movie serial, before the comics adopted it 11 years later in Detective Comics #205 (written by Bill Finger, penciled by Sheldon Moldoff). When the hands of the clock are moved to 10:47 PM (the exact time the Waynes were murdered), the front wall of the clock opens, revealing a staircase that leads down to the Batcave.

Did anybody catch the GCPD’s code for vigilante disturbance? The number 391 is a reference to 1939, the year Batman was first published (read 1939's Detective Comics #27 here). 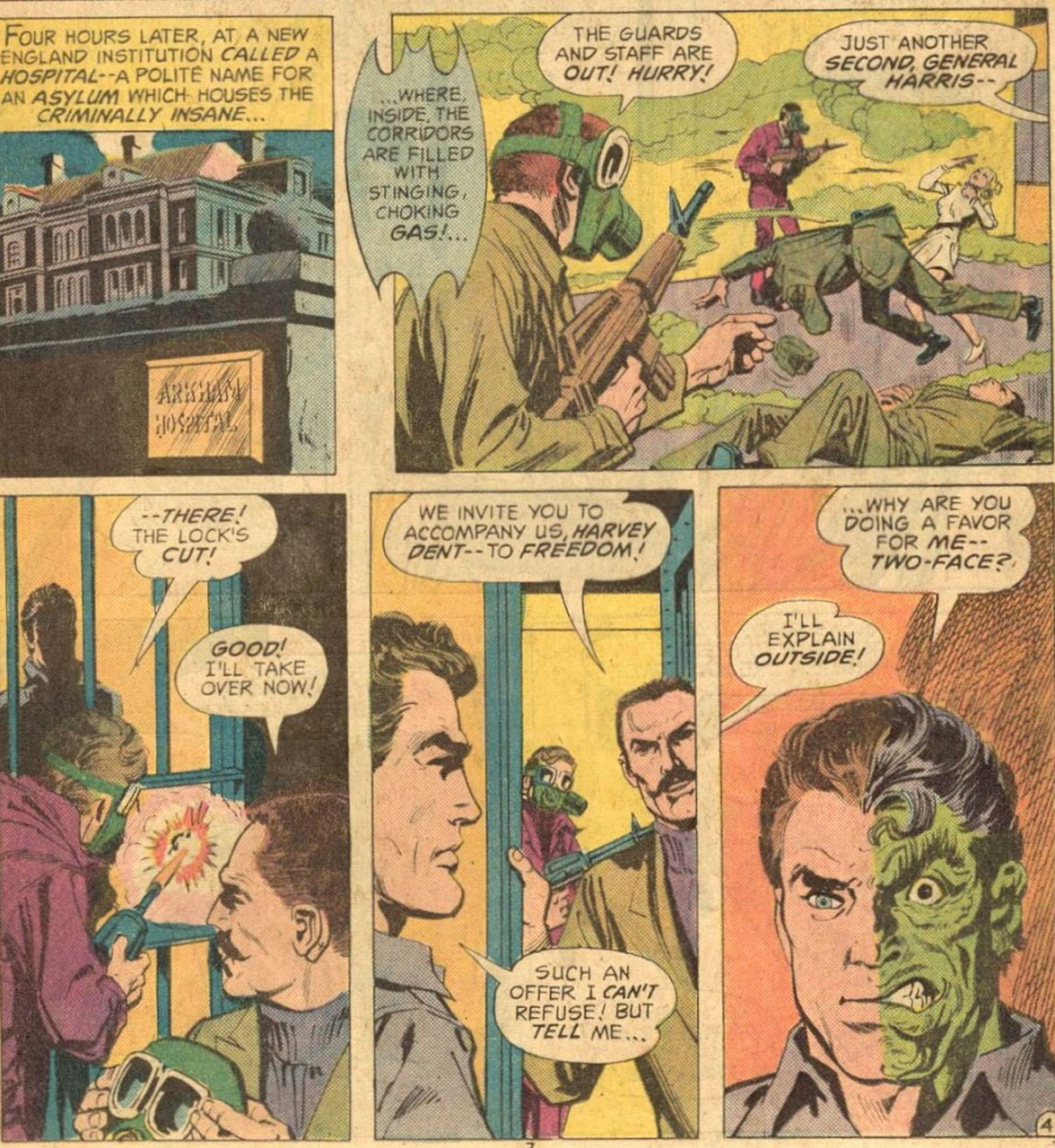 During Dick’s nightmarish visit to Gotham, he sees the aftermath of a bloodbath from his former mentor at Arkham Asylum. The facility, which attempts to rehabilitate Gotham’s rogues, was first seen as “Arkham Hospital” in Batman #258 (written by Denny O’Neil and penciled by Irv Novick). The issue informed readers that "hospital" was a "polite" way of saying "asylum," a pretense which was dropped in Batman #326 (written by Len Wein and penciled by Irv Novick), when it became known as “Arkham Asylum” for the first time. It’s become one of the most iconic locations in Batman lore, with its own limited series, video game franchise, and more.

Jason Todd tells Dick all about his disastrous run-in with the Riddler at the beginning of the episode. Later, we see that Riddler was one of the victims in Batman’s Arkham massacre. Readers first met the Riddler in Detective Comics #140 (written by Bill Finger and penciled by Dick Sprang). The Riddler was obsessed with proving his intellectual superiority to Batman and so would leave clues about his upcoming crimes. Those clues were usually his undoing, as Batman constantly outthought the Riddler and captured him.

The Ventriloquist and Scarface 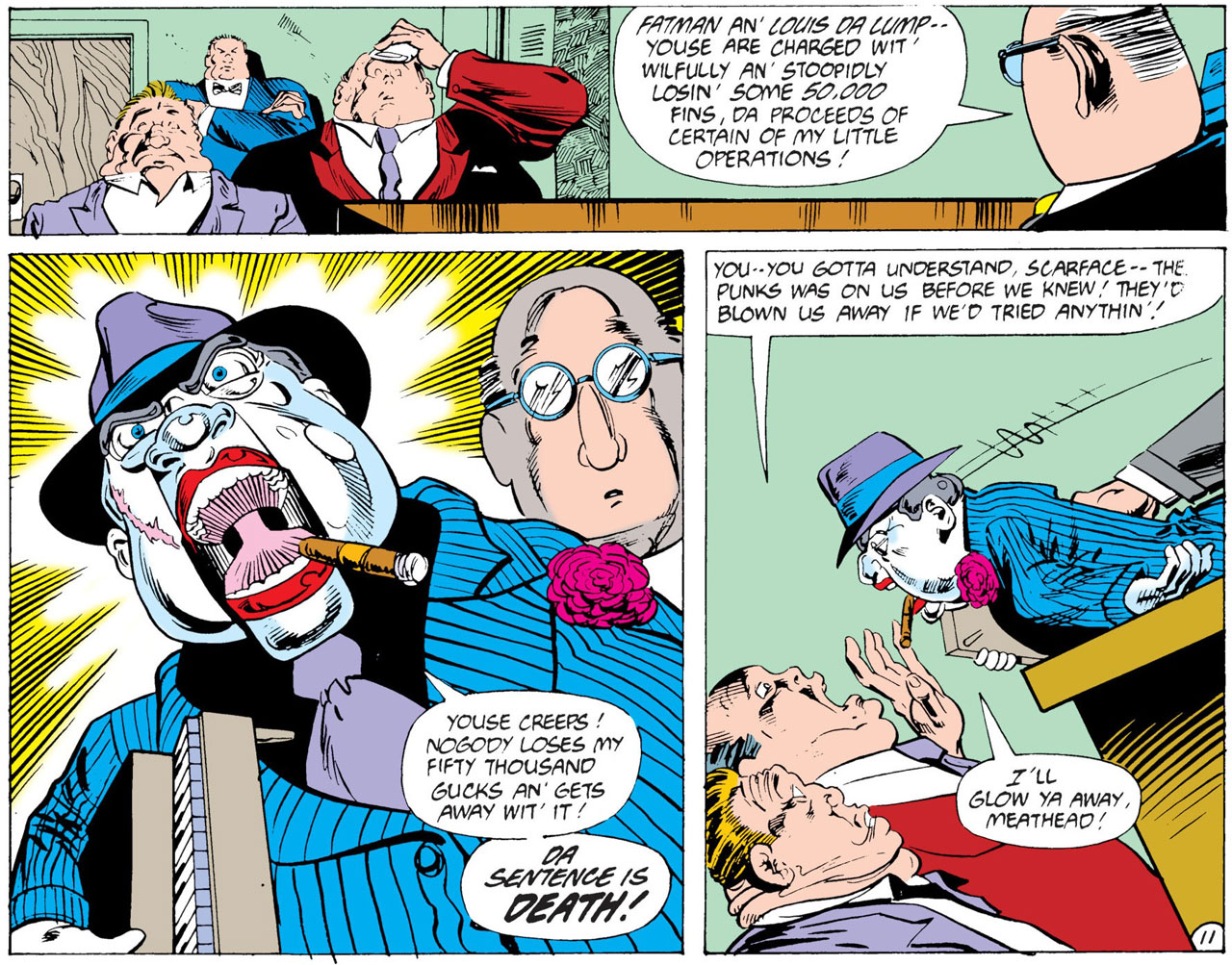 To neutralize Kory, Batman grabs a nearby cold gun, presumably from his Batcave trophy room. The cold gun most likely belonged to Mr. Freeze, whom we first met, as "Mr. Zero", in Batman #121 (written by Dave Wood and penciled by Sheldon Moldoff). Two-Face and the Joker were also seen in this episode, and we covered their origins in our rundowns of the Easter eggs in “Jason Todd” and “Donna Troy”. 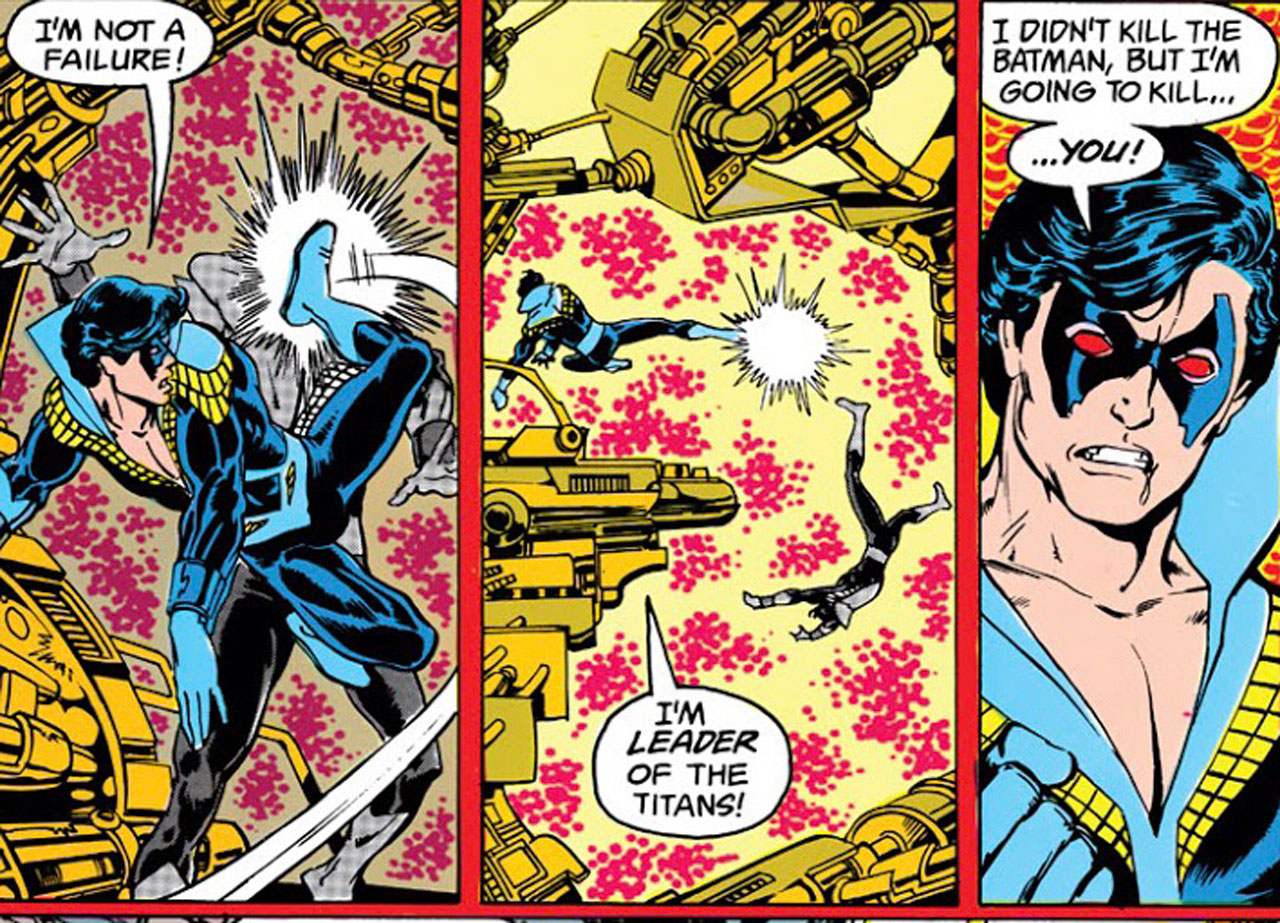 As this week's episode ends, Dick Grayson has given in to his darkness. His eyes transform as he's brought under the control of the terrible Trigon! This cliffhanger is straight out of 1984's The New Teen Titans #4 (written by Marv Wolfman and penciled by George Perez, read The New Teen Titans #4 here). Trigon made each of the Teen Titans face nightmare scenarios, in which they were tempted to surrender to their inner darkness. Although the Teen Titans fell victim to Trigon’s spell, they were eventually able to overcome it and defeat Raven’s demonic father. Will this version of Dick be as lucky? We’ll find out when Titans returns for season 2.

As season 1 comes to a close, we'd like to give a huge hat’s off to the Titans production crew for sprinkling so many comic book references throughout this season. They’ve clearly done their homework, and it’ll be interesting to see what they come up with for season 2!

Are you pumped for season 2 of Titans? Let us know in our Community!