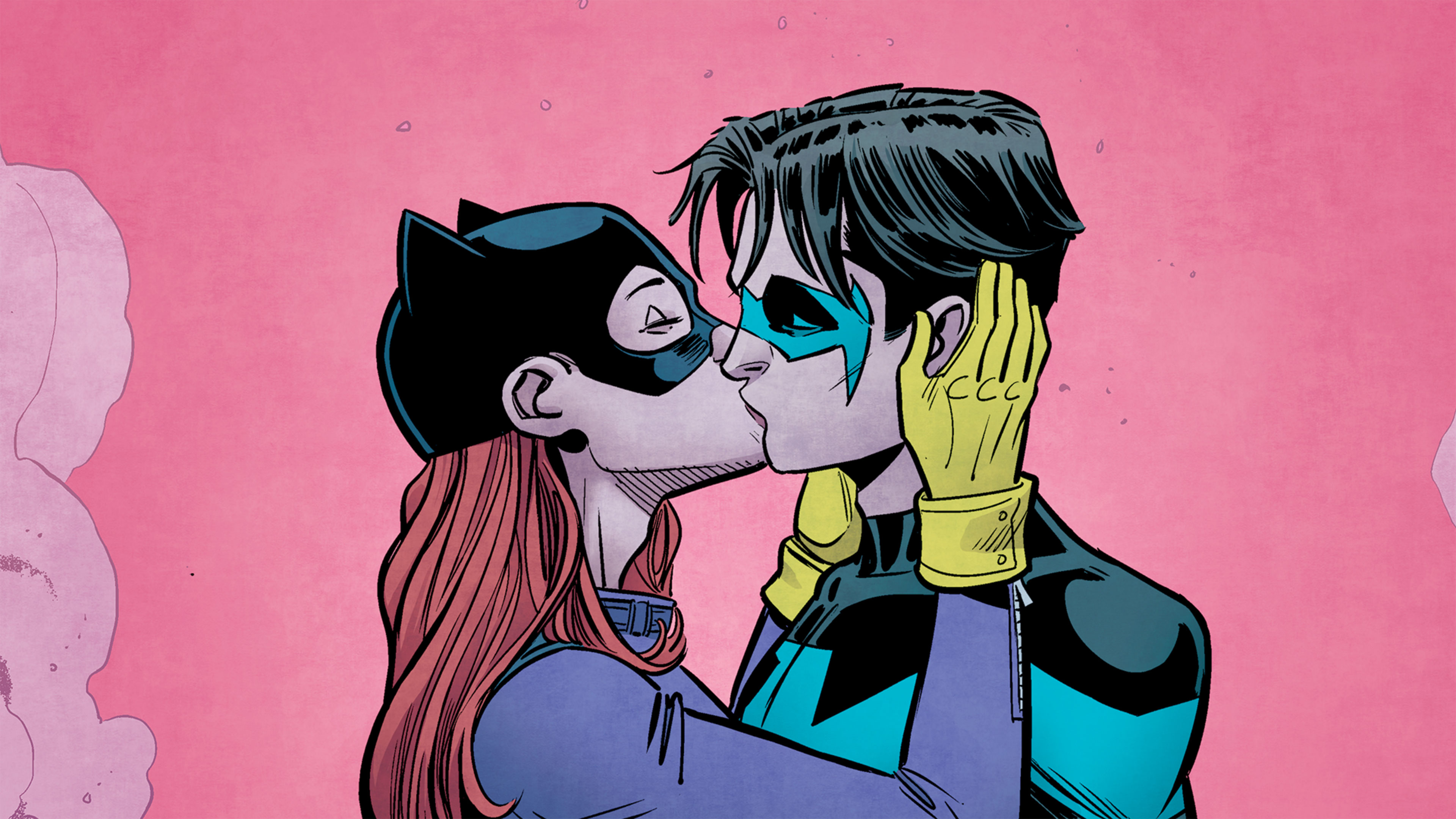 Is Barbara Gordon the love of Dick Grayson’s life? The two have been doing the “on again off again dance” decades before anyone ever heard of Jim and Pam. No matter what tears them apart, Batgirl and Nightwing seem to always find a way back to each other. We recently took a look at Dick Grayson’s black book, followed that up by revisiting his relationship with Starfire, and now it’s Barbara’s turn. If you’re a Dick and Babs shipper, here are 12 essential stories to take you through the journey of their star-crossed romance.

“Batgirl Breaks up the Dynamic Duo” 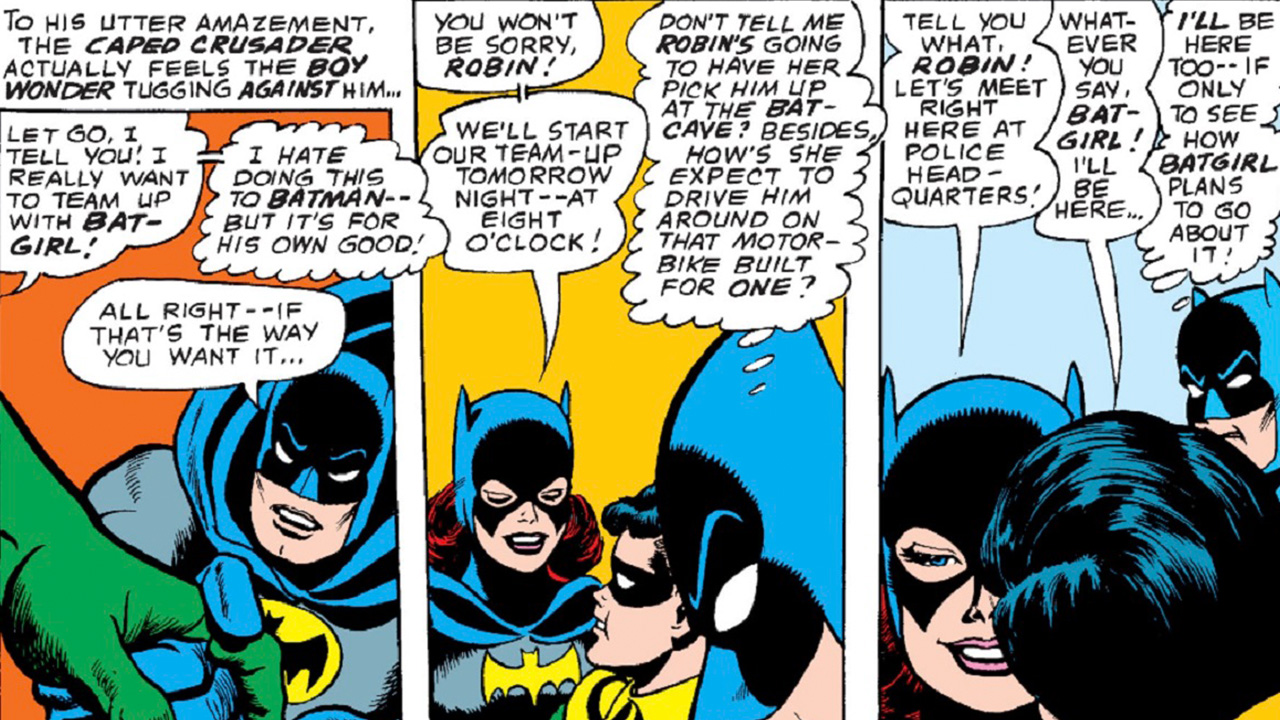 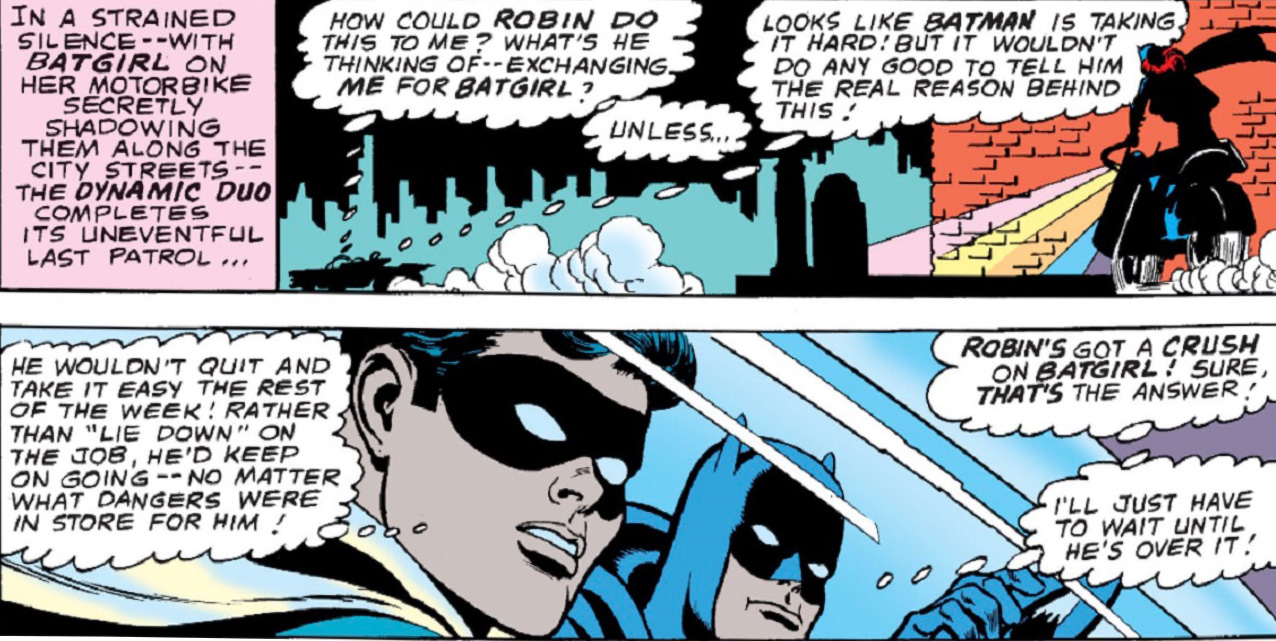 RELATIONSHIP STATUS: Robin and Batgirl team-up without Batman for the first time.

WHERE TO READ IT: Detective Comics #369

THE STORY: Batgirl learns that Batman has been infected with Swamp Fever, which will cause him to collapse from exhaustion in a matter of days. Instead of telling the Caped Crusader what’s going on, Batgirl and Robin come up with a plan to trail the Dark Knight by pretending to form their own partnership. Although the comic features some questionable decisions, including a dignity destroying tug-of-war game with Robin, this was the first time Babs and Dick teamed up making this essential shipper reading 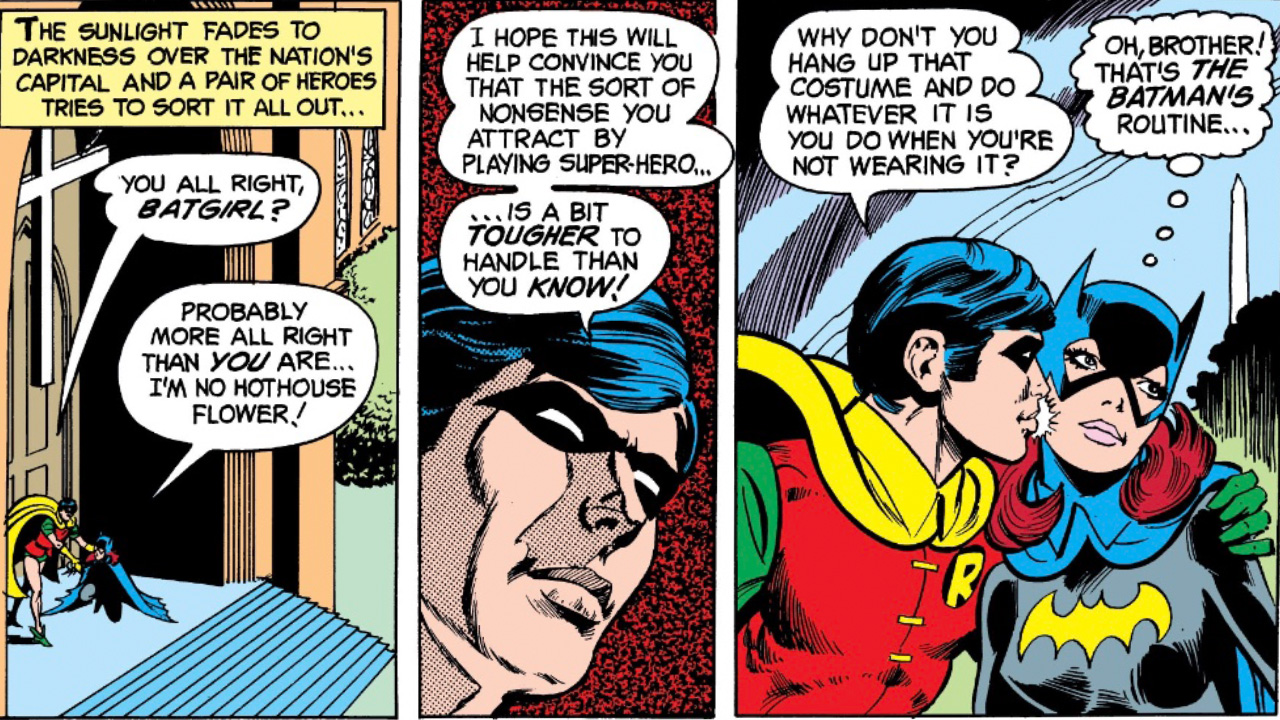 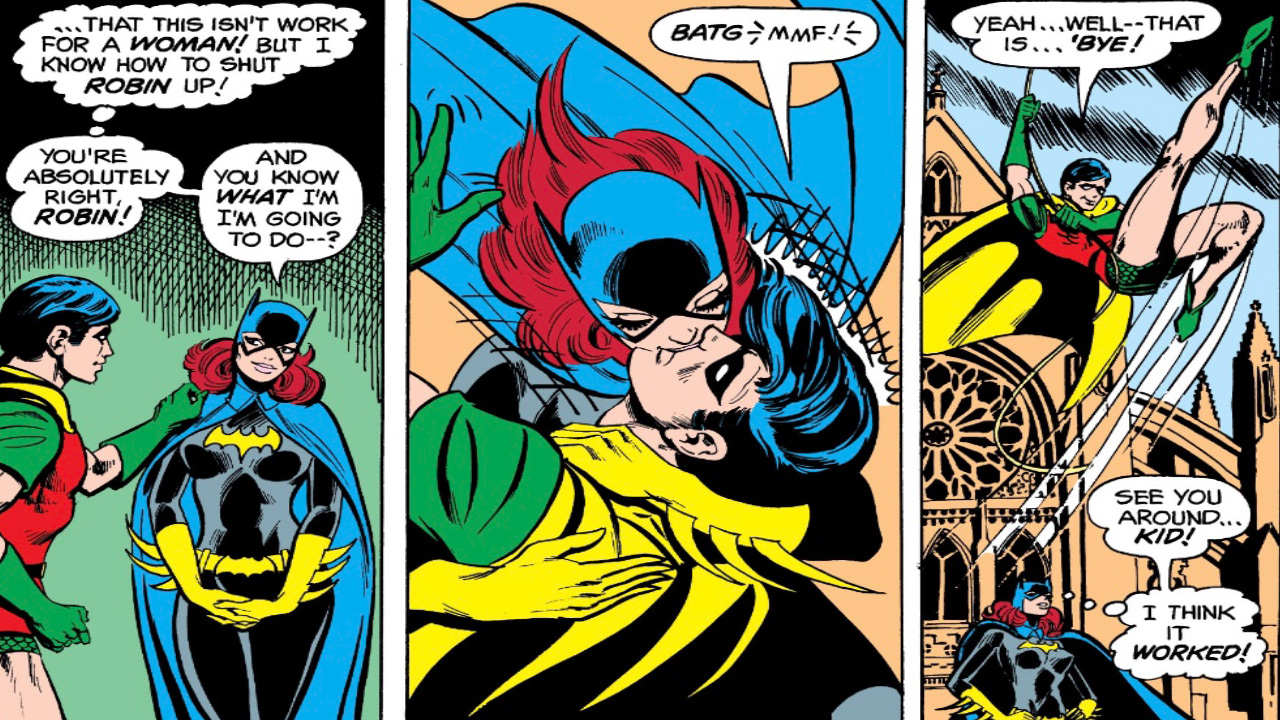 THE STORY: Batman Family was an ongoing anthology title which featured regular team-ups between Robin and Batgirl. Dick was now a college man, and no longer the tiny Boy Wonder that Batgirl had first met years ago. Their partnership developed over the course of the series, with the two learning one another’s identities and becoming closer. The genesis of the Dick/Babs romance began here, with Batgirl kissing Robin to shut him up in the first issue, the two faking a wedding in issue 11, and Dick confessing his feelings in issue 13.

“All My Enemies Against Me”

WHERE TO READ IT: Detective Comics #526

THE STORY: When all of Batman’s enemies join forces to take the Caped Crusader down, Batgirl tracks down Robin to lend a hand. Throughout the story, Dick and Babs take on Gotham’s deadliest rogues, as they remain one step behind the Dark Knight. This story was the last time Dick Grayson and Barbara Gordon teamed up as Batgirl and Robin, and would be their last scene in a comic together for 11 years! 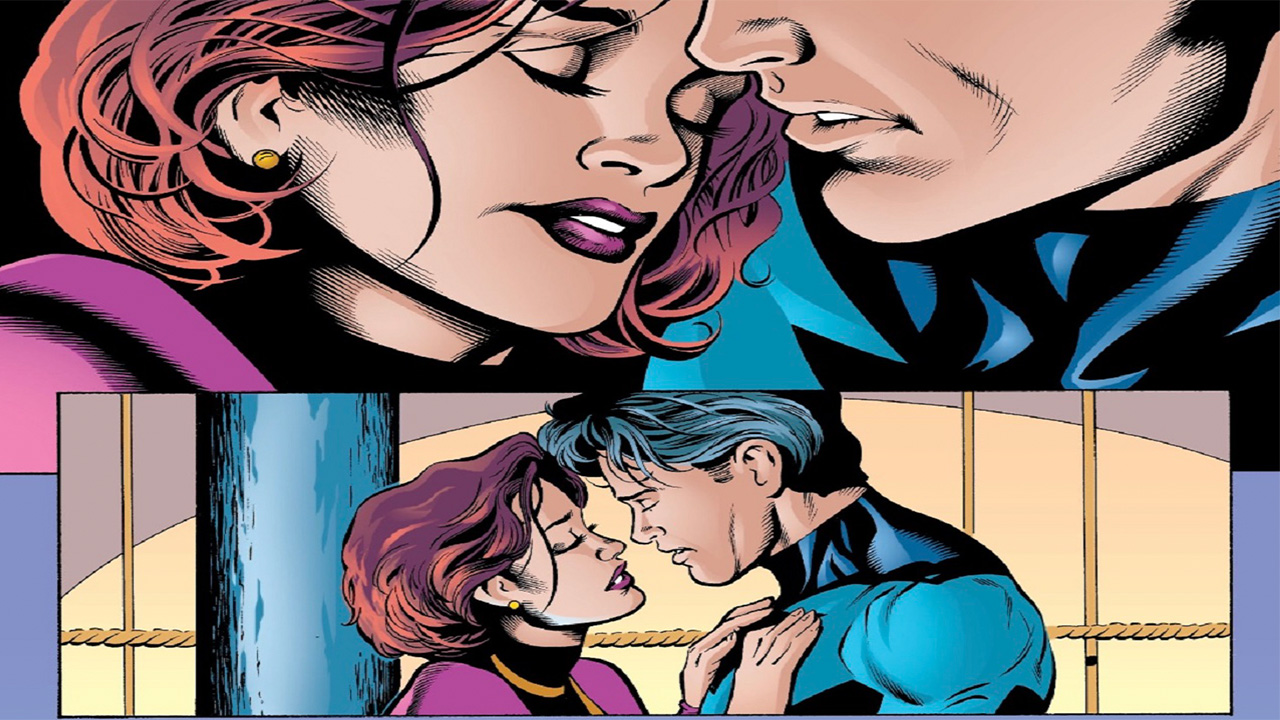 RELATIONSHIP STATUS: Dick takes Babs on a non-date and tries to spark a romance.

THE STORY: Barbara and Dick go on an outing that she insists is not a date, and talk about how they each process tragedy. At the time Barbara was confined to a wheelchair, and Dick made special arrangements for her to use a trapeze at Haly’s Circus, so she could revisit the feeling of flying through the air. The two enjoy the experience, but Barbara pulls away before their romantic spark could ignite. This issue was one of the most critically acclaimed comics of 1999, and is a must read for any Dick and Babs shipper. 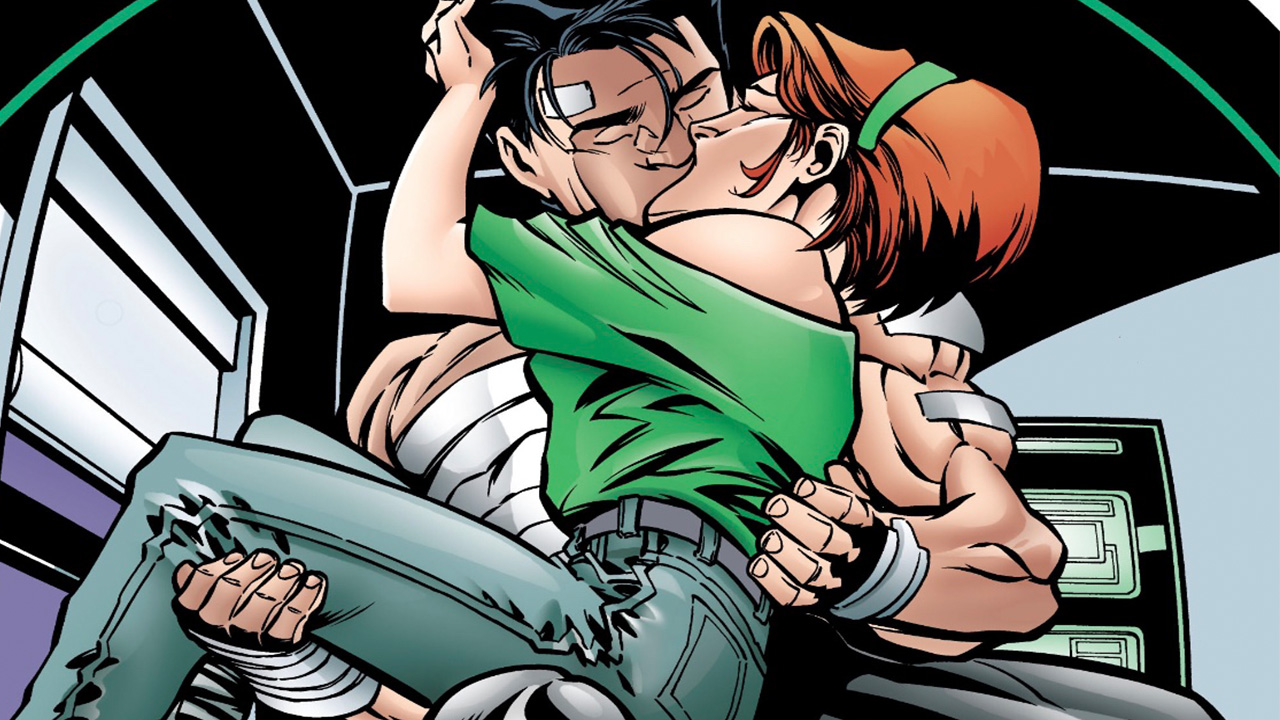 RELATIONSHIP STATUS: Will they or won’t they becomes “they did!”

THE STORY: Nightwing seeks refuge in Oracle’s clocktower after being injured during a mission in No Man’s Land. While Oracle plays nursemaid to Nightwing, their lust for one another reaches critical mass and they finally enjoy a kiss. Of course Nightwing’s ex the Huntress shows up seconds later, followed by an army of rogue GCPD officers. What’s a former Boy Wonder to do?

THE STORY: This limited series reimagines the early days of Batgirl’s crime-fighting career, and her early relationship with Dick Grayson. Batgirl didn’t regard Robin as more than an annoyance at the time, but that didn’t stop the Boy Wonder from stealing a kiss while the duo were chasing Blockbuster on their motorcycles. The story also contains an amusing moment where Dick is forced to swallow his dignity and wear Barbara’s costume to help protect her secret identity. 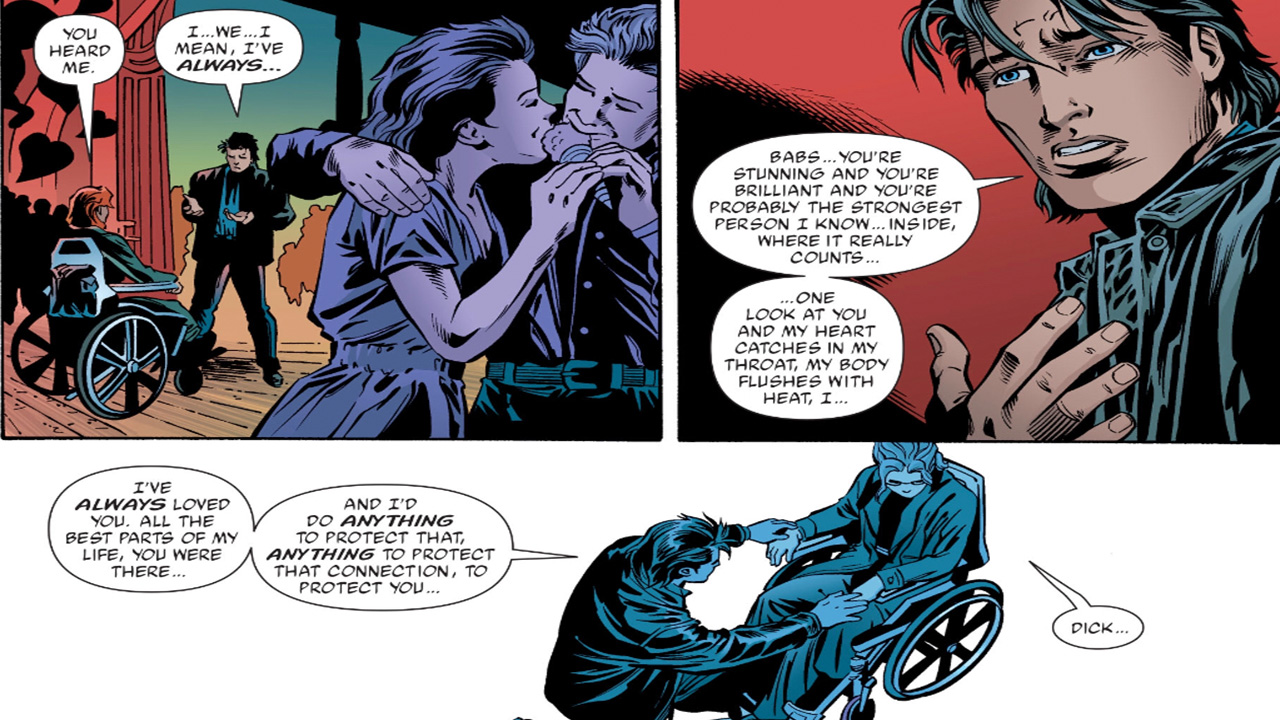 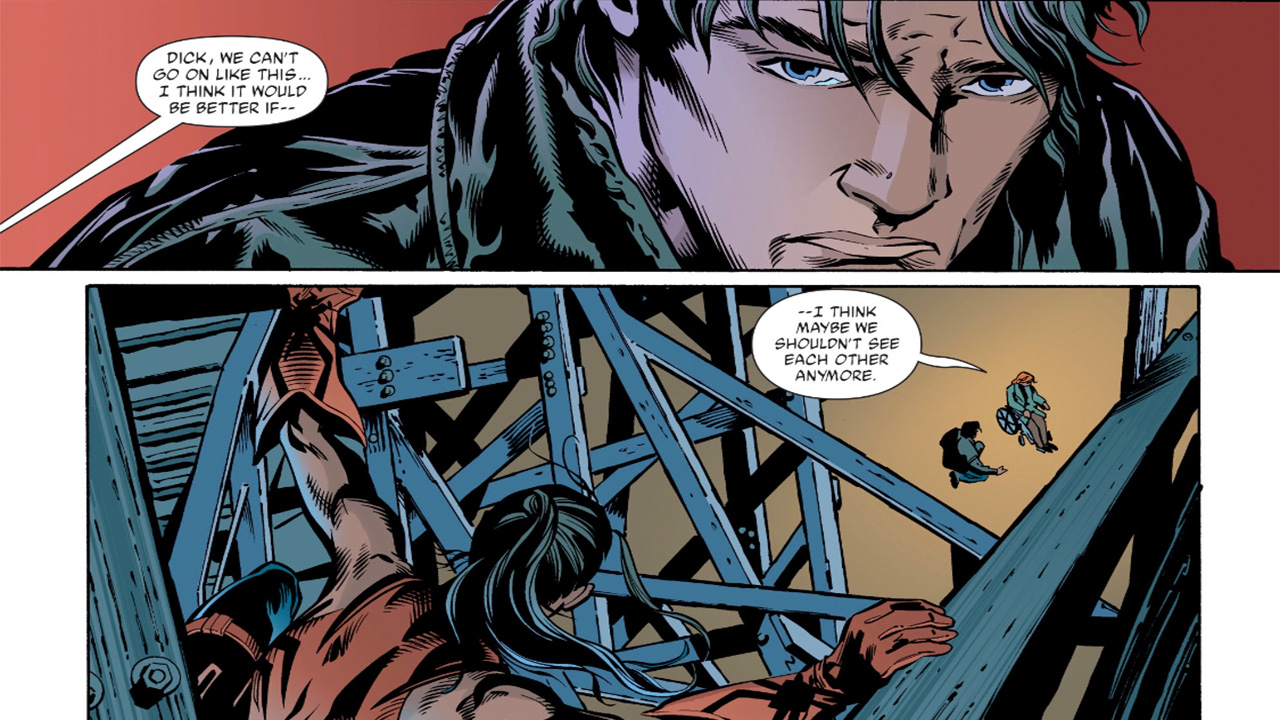 WHERE TO READ IT: Nightwing #87

THE STORY: Tarantula has been hired to strike at Dick Grayson by killing Barbara Gordon, but the anti-hero improvises on the job. During her attack on the couple, she manipulates the situation, causing the cracks in their relationship to grow. When the dust settles, Barbara and Dick have a long talk resulting in her dumping him. 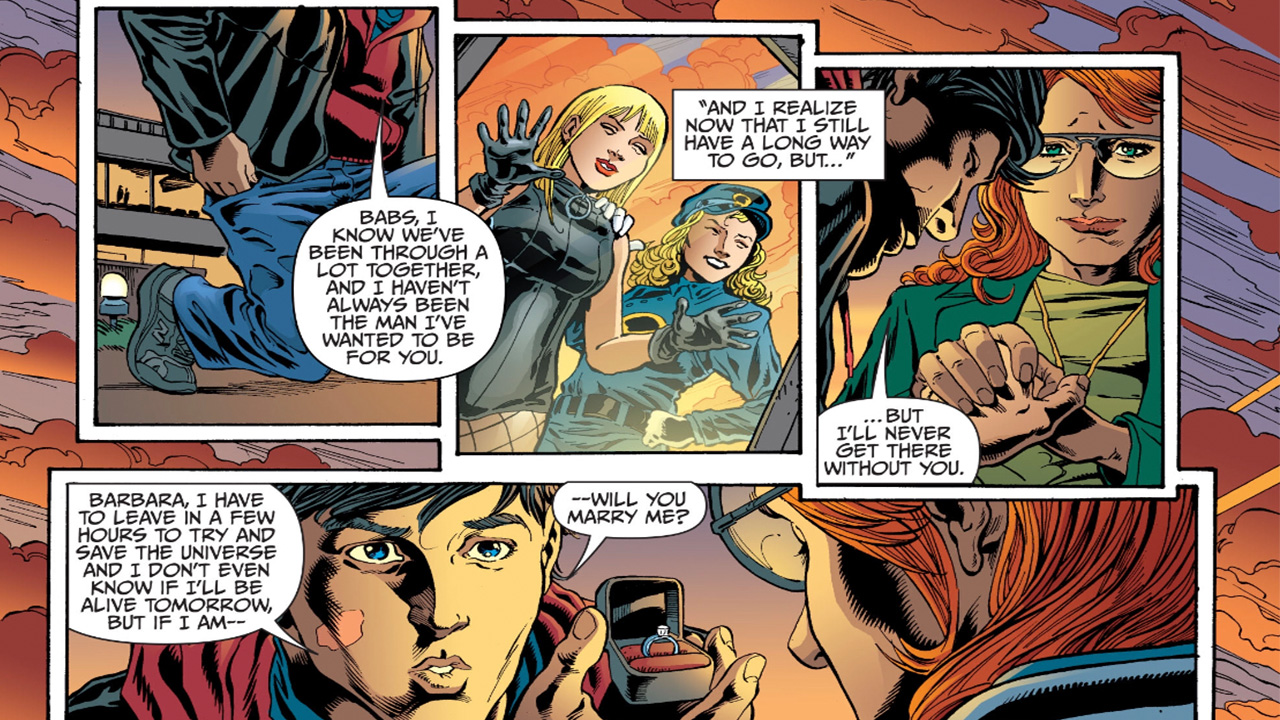 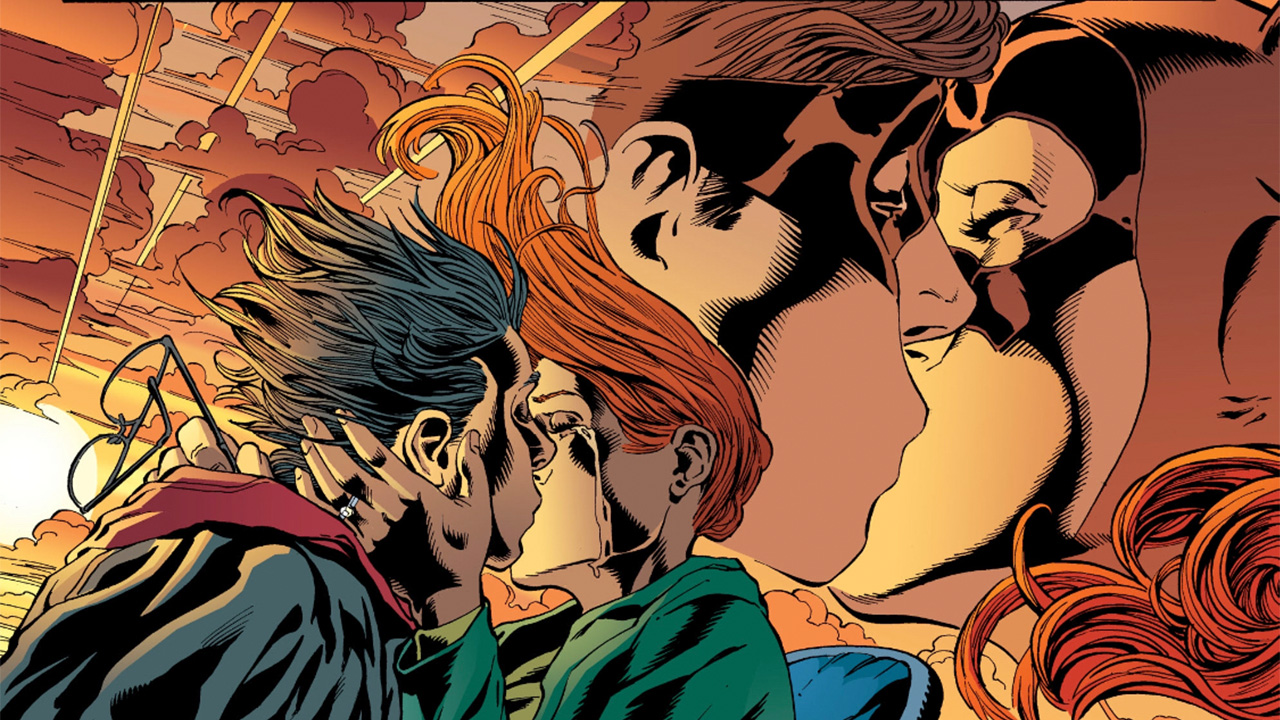 THE STORY: After the destruction of Bludhaven, Nightwing gets his affairs in order as he prepares for the climactic battle of Infinite Crisis. Dick tracks Barbara down, and lets him know how much he’s grown in the past few months, and how she makes him a better man. Dick presents Barbara a ring and proposes to her. The issue ends with Barbara wearing the ring as she tearfully kisses Dick.

THE STORY: After nearly dying during Infinite Crisis, Dick is nursed back to health by Barbara, and the two ponder their next steps. A series of flashbacks reveals their “first date” as teenagers, how Barbara reacted to Starfire, and what Dick did when he learned about the Joker’s attack on her. In the end Dick and Babs decide to put their engagement on hold, but leave the door open for the future. 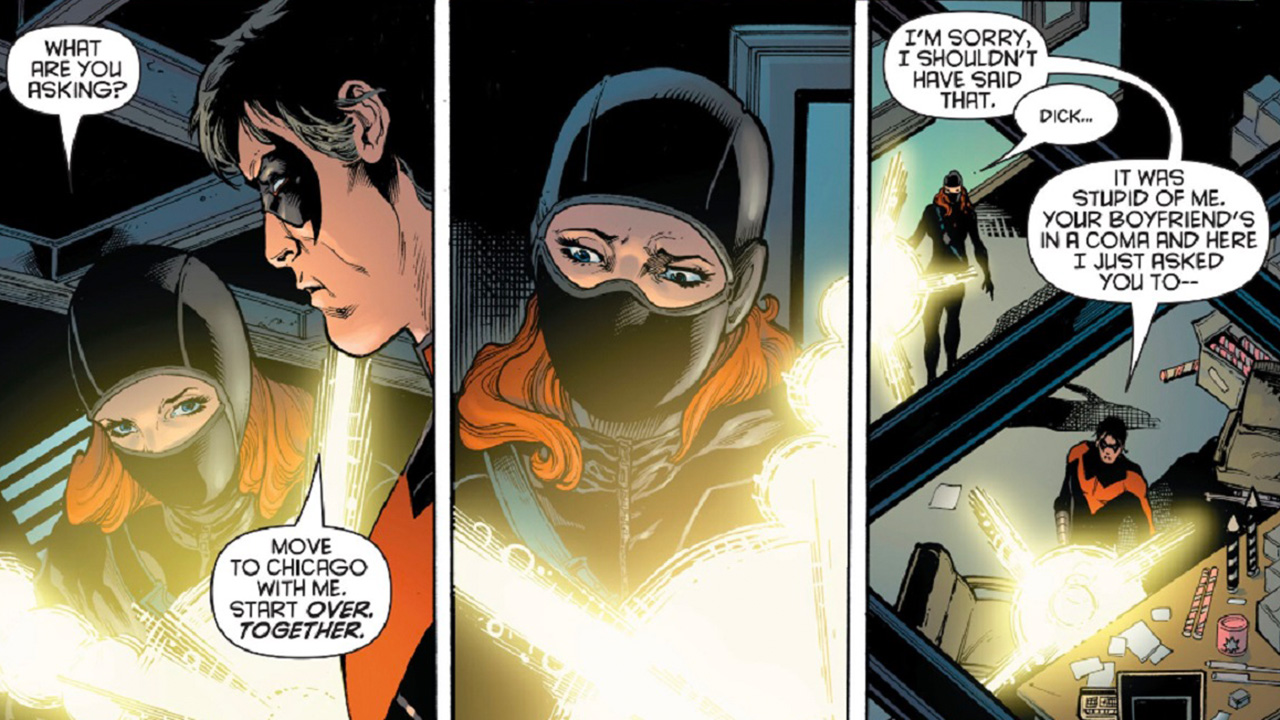 RELATIONSHIP STATUS: Contemplating running away together.

THE STORY: Barbara’s life is in chaos. Her boyfriend is in a coma, and her father is hunting her as Batgirl. Nightwing makes her a tempting offer – leave it all behind and come with him to Chicago. Is this their chance to finally make their relationship work, or is their timing off again? 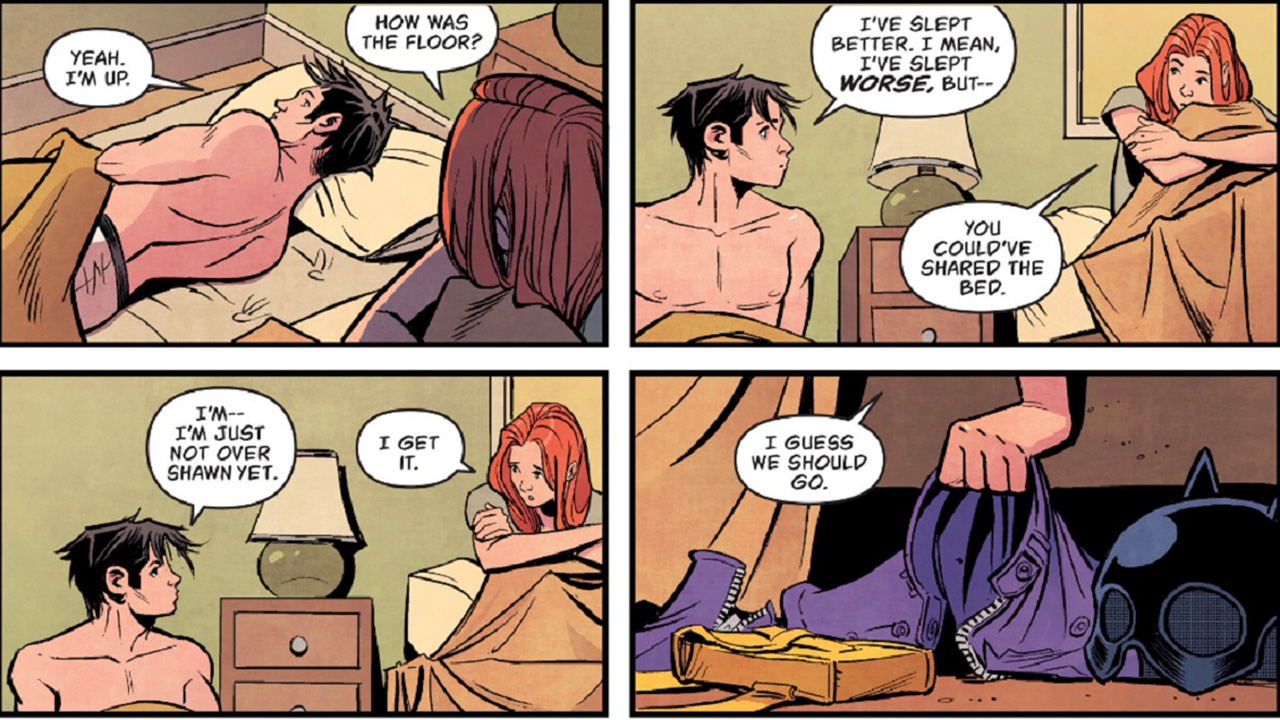 THE STORY: When a villain from their past returns, Nightwing and Batgirl team-up to right old wrongs. Their adventure brings some old feelings to the surface, as the two reminisce about their teenage partnership. Romance begins to bubble under the surface, but Dick’s complicated feelings over his breakup with Shawn Tsang prevent them from acting on it. 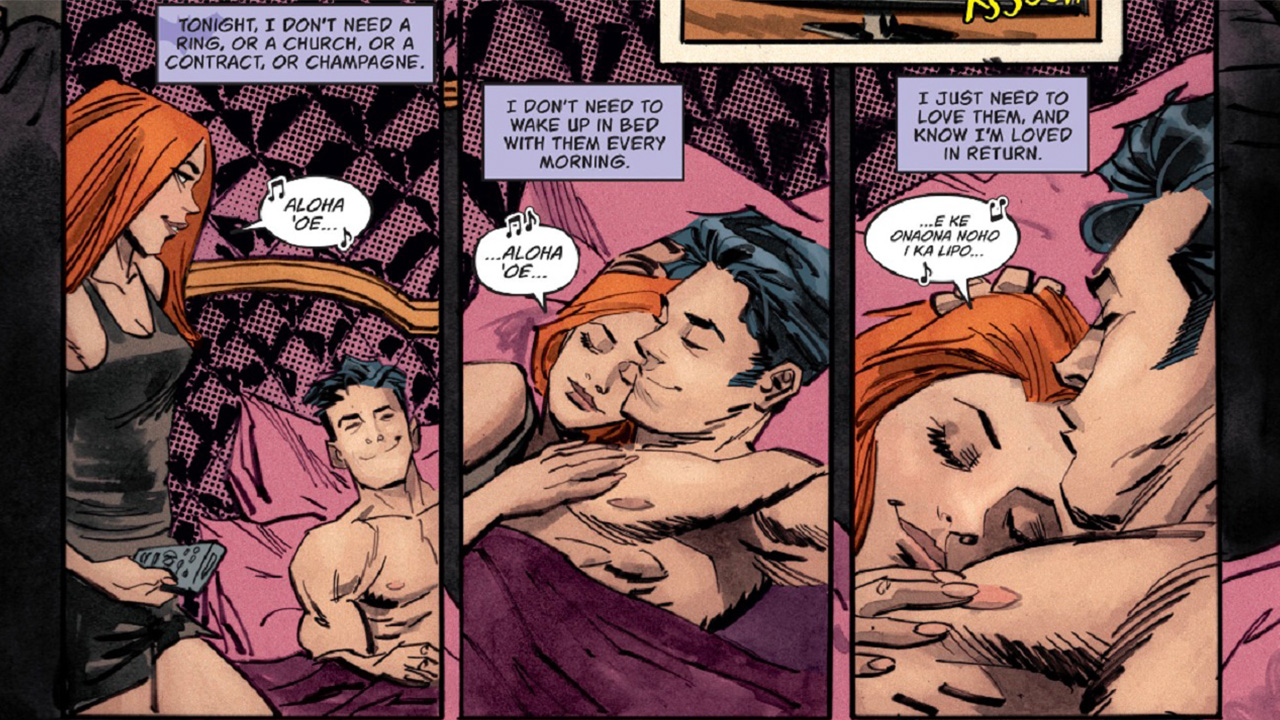 THE STORY: Dick and Babs take a break from their hectic crime-fighting life to enjoy some quiet time together in a honeymoon suite that was originally booked for Batman and Catwoman. With no villains in sight, the two are free to snuggle and discuss their feelings. Barbara realizes that even though they’re not officially together, she can always count on Dick Grayson.

Are you Team Batgirl or Team Starfire? Let us know in our Community!