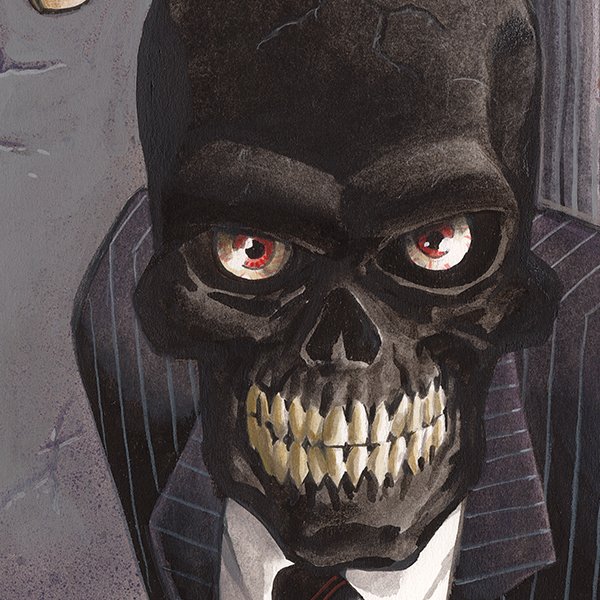 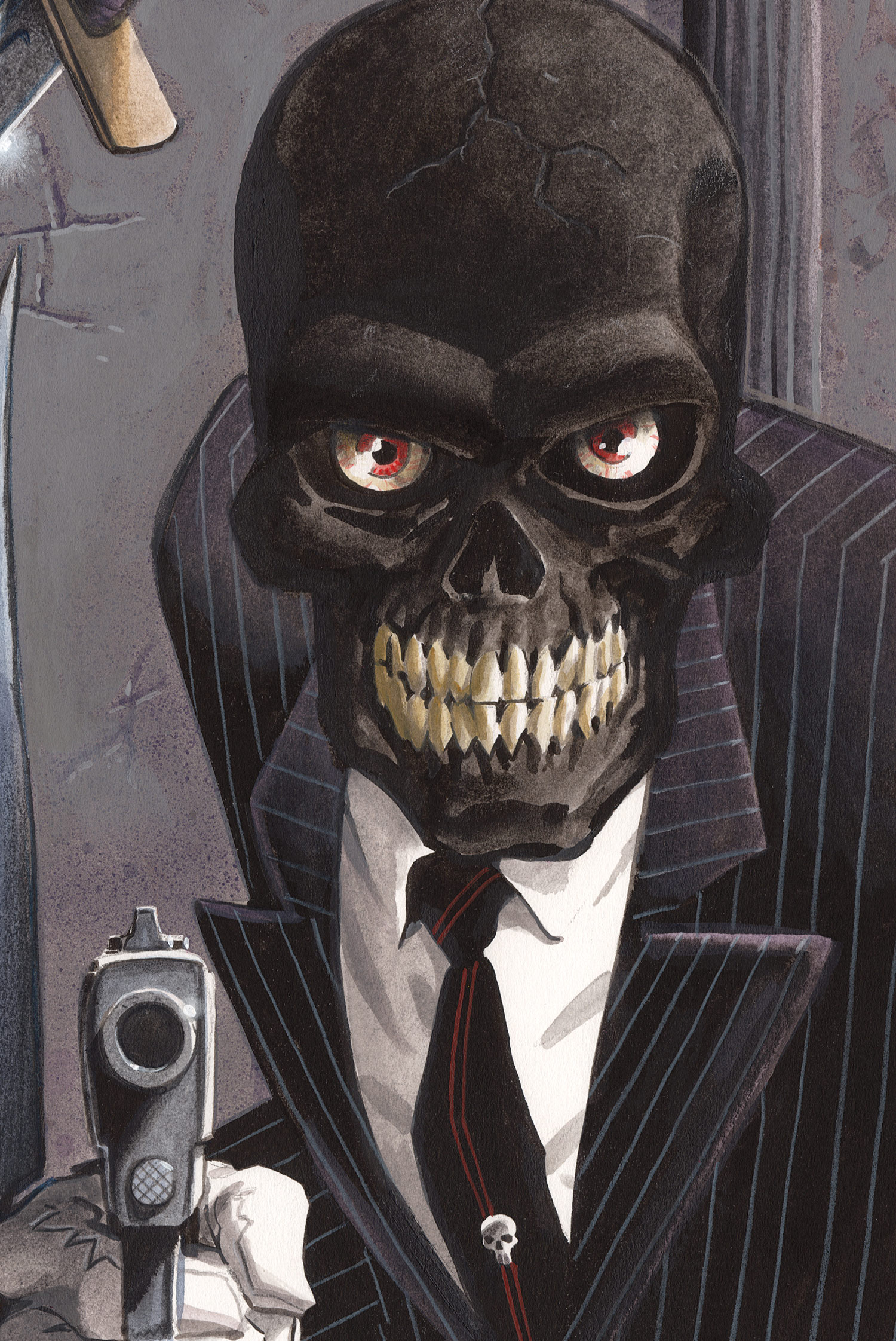 The sadistic Roman Sionis only cares about two things: hurting people, and total control of Gotham City’s criminal underworld. If he can use one to accomplish the other, then all the better.

The sadistic Roman Sionis only cares about two things: hurting people, and total control of Gotham City’s criminal underworld. If he can use one to accomplish the other, then all the better.

In a city full of villains who declare themselves the sworn enemy of Batman, few share that same enmity for billionaire Bruce Wayne. One exception to this is Roman Sionis, the Black Mask. Born into wealth and power much as Bruce Wayne was, Roman harbored nothing but resentment for his wealthy parents and the many opportunities they presented to him. With an ebony mask fused to his face, Roman set out to destroy Bruce and take control of the city that failed him, by whatever means necessary.

More recently, the role of Black Mask was temporarily filled by Jeremiah Arkham, the director of Arkham Asylum. Using Roman’s signature visage, Arkham orchestrated the chaos of the asylum’s most notorious patients, until Sionis returned once more to reclaim his title.

Roman Sionis was born into wealth and power as the son of Richard Sionis, founder of the lucrative Janus Cosmetics corporation. As a member of Gotham’s upper crust, Roman was often made to socialize with young heirs his age- most notably, young Bruce Wayne, to whom Roman never quite took a shine. Unlike Bruce’s doting parents, Roman’s maintained distance from him, always encouraging him to mask his feelings in public — by force, if necessary.

Later, Roman was eventually granted a high ranking position at his father’s company at a young age. But when his parents disapproved of his relationship with a lower-class Gothamite, Sionis burned down his family mansion in a fit of rage, with his parents trapped within.

Roman inherited his family’s entire estate, as well as the company. But hasty and careless business practices rendered them close to bankruptcy… until his would-be childhood friend Bruce Wayne offered to bail them out.

Furious that he had once again been denied control of his own life, Roman was driven to madness, broke into his parents’ crypt and carved a skull mask from his father’s ebony coffin. As Black Mask, no one would take away his agency ever again. Not his family, not Bruce Wayne, not Gotham, and certainly not Batman.

Roman Sionis is a criminal mastermind and an expert in torture. Given time, Black Mask can bring nearly anyone in his captivity to their breaking point, whether for his personal gain or pleasure. Black Mask is also more than competent with most firearms, and in hand to hand combat.

For a brief period in the New 52, it was suggested that Roman may be influencing his successor, Jeremiah Arkham, with mind controlling properties embedded into his mask, as well as the masks of the False Face Society he employs.

In the “Year of the Villain,” Lex Luthor gifted Black Mask with a new power: the ability to assume the identity of anyone he kills. Roman Sionis used this new ability to take over an influential pharmaceutical company, and a news media corporation.

Roman Sionis first appeared as the leader of the False Face Society, a group of criminals who could be identified by their colorful, creative, and sometimes terrifying masks. Using his parents’ crypt as his base of operations, the False Face Society carved their influence through Gotham’s underworld to the point that they became a threat to the city’s safety which its protector, Batman, could no longer ignore. This initial crime spree took the lives of several powerful Wayne Enterprises executives, in vengeance for the perceived slights against his own honor when they absorbed Janus Cosmetics. But with the newly appointed Robin Jason Todd at his side, Batman managed to halt the spread of the False Face Society and have Sionis committed to Arkham Asylum.

Like many would-be contenders for control of Gotham’s underworld, Black Mask got his chance to rise once more during the events of NO MAN’S LAND, where a plague-ridden and earthquake-ravaged Gotham was forced to fend for itself. Claiming a large portion of Gotham for himself as it was broken into pieces by its signature Super-Villains, Black Mask rebranded himself as a cult leader, demanding ritual disfiguration from his charges in tribute to his own skull-faced visage.

Black Mask’s operations in No Man’s Land were put to an end when Batman returned to clean up the city, but he soon regrouped as the kingpin of a drug trafficking operation in the East End of Gotham - Catwoman’s territory. When Catwoman struck against Black Mask’s operations, he retaliated by kidnapping her Maggie and Maggie’s husband, Simon, killing Simon in front of Maggie, and forcing Maggie to eat her husband’s eyes. This ritual utterly broke Maggie’s mind, rendering her catatonic — an assault which Selina would not soon forget. (CATWOMAN #16, 2003)

But soon, Black Mask would become more powerful than ever before, realizing his own grand ambitions. When the factions of Gotham’s underworld went to war in the “War Games” storyline, it was careful, clever maneuvering on Black Mask’s part which made him the victor. When the dust cleared, all the crime families and gangs of Gotham had pledged their allegiance to Sionis.

Black Mask may have remained the criminal overlord of Gotham in perpetuity, if not for one factor: the return of Jason Todd, the first Robin to oppose him (“Under the Hood”). Now under the guise of Red Hood, Jason sought to address Gotham’s crime problem in a way that his former mentor Batman never could: by taking direct control of it himself. But to do that, Gotham’s current king of crime had to fall. Organizing guerilla tactics and strategic takeovers, Red Hood chipped away at Black Mask’s consolidated operations until he could no longer claim to be the big man on campus. And while Red Hood himself was eventually chased away from his new position as crime lord by Batman, Black Mask’s empire would never be the same.

In his efforts to crawl back to the top, Black Mask once again ran afoul of Catwoman- who had, indeed, not forgotten their previous encounter. Rather than allowing him to risk the safety of those she loved once more, Catwoman put a gun to Black Mask’s face. Sionis was confident that Selina was one of the heroes now, and that she’d never take the shot. Sionis was wrong. (CATWOMAN #52, 2006)

After Batman’s supposed demise in FINAL CRISIS, Batman’s family was divided over who would be the one to assume the cowl in his absence. And during this time, another mantle was being assumed… that of the departed former crime lord of Gotham, Black Mask. As the newly recognized Batman, Bruce’s original ward Dick Grayson deduced that the new Black Mask was none other than Jeremiah Arkham, the supposed caretaker of Arkham Asylum who had himself been driven mad by his duties.

After the time-altering effects of FLASHPOINT, the death of Roman Sionis was undone — though he was now a full time patient at Arkham, controlling Jeremiah Arkham as his own puppet through a mysterious mind control property embedded in his mask. Roman would assume direct control of his operations once more during the invasion of Earth by the Earth-3 Crime Syndicate of America in FOREVER EVIL, where he joined the ranks of their Secret Society of Super-Villains.

After a brief partnership with Penguin and Great White Shark, Black Mask reasserted his position in the criminal landscape of Gotham by entering into a tentative partnership with Red Hood and his team of Artemis and Bizarro to take control of Gotham for themselves — one which Red Hood intended to betray from the very start (RED HOOD AND THE OUTLAWS #1-6, 2018). Defeated by Red Hood and his Outlaws, the sadistic Black Mask had historically proven to be an even more dangerous threat to Gotham and its citizens when he felt embarrassed. So to ensure no one was hurt again, Damian Wayne locked Black Mask up in a secret prison overseen by his newly reorganized Teen Titans (TEEN TITANS SPECIAL #1, 2018). Black Mask remained there for quite some time, his location unknown to all but a select few within the Teen Titans themselves - until Damian brought in Deathstroke the Terminator for imprisonment at the same facility, where it didn’t take much coaxing to convince him to break all of Damian’s prisoners out.